Direct manipulation, as-you-go visualization, and design automation are new for Inventor, and Inventor Publisher and Alias Design for Inventor join the product line.


For years Autodesk focused on transitioning its AutoCAD user base to 3D modeling. Today, the company reports, 3D is but a stepping-stone to broader design pursuits. At the Manufacturing Tech Day media event last month, Robert "Buzz" Kross, senior vice-president of the Manufacturing Industry Group, put it bluntly: "3D is not spectacular," he said, explaining that 3D CAD today is "just what you do — it's just a technique."

What Autodesk really wants you to embrace these days is digital prototyping — that is, using 3D design, visualization, and simulation tools to "experience products before they are built." Kross said Autodesk delivers digital prototyping as a complete package for manufacturing environments. "[That] is what it takes to compete today."

Autodesk's 2011 digital prototyping lineup includes some groundbreaking upgrades for Autodesk Inventor, a few new products, and enhancements across the board for product development professionals focused on conceptual design, visualization, engineering, and manufacturing. Software products are increasingly multidisciplinary, often supporting varied functions throughout the product-development process. Indeed, Kross stated at the event, many users today have a blend of previously distinct responsibilities, including creative design, engineering, and analysis.

Inventor 2011 is full of new features that support all facets of 3D modeling.

Direct model manipulation. New direct manipulation capabilities in Inventor 2011 are said to accelerate design times on common tasks such as assembly modeling by approximately 40%, compared with Inventor 2010. With direct manipulation, all the input needed for a command can be controlled right at the point where users are directly changing geometry. Dynamic input in the sketch environment helps engineers to sketch more freely and directly.

In-the-window visualization. An eye-catching new development, literally, is Inventor 2011's new in-the-window design visualization — it's "not a rendering," Kross emphasized. New shading, lighting, and material properties offer a more sophisticated, photorealistic representation of designs, updating as you go. An expensive modeling solution should offer graphics that are better than "those in a $50 game," Kross said. 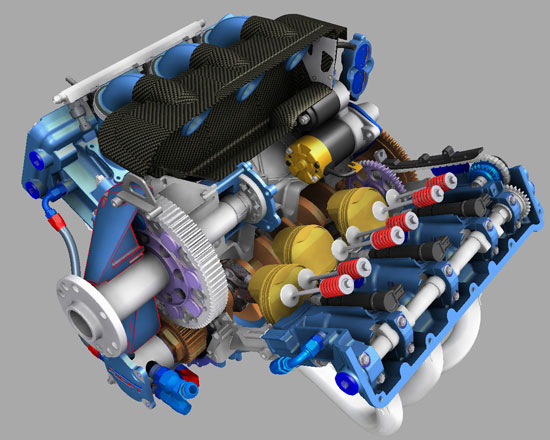 Visual display in Autodesk Inventor 2011 features significantly improved shading, lighting, and material properties in the default work environment, giving a more realistic representation of the design at all times.

Simulation. Tools in Inventor Professional 2011 simplify creating and validating multiple design iterations. The new Simulation Guide walks users through the steps required to define the best scenario to represent the particular loads or interactions, making simulation accessible to new and occasional users by helping them to set up loads, constraints, and contacts as well as generate and interpret the results. Tools also enable engineers to simulate the performance of load-bearing frame models quickly. Referring to the advanced features now found in Inventor Professional 2011 and Algor Simulation 2011, Kross said, "We are ahead of what our customers need [for design analysis], which is unusual, but I think they'll be there soon."

Tooling. Inventor Tooling 2011 improves performance for a number of key operations by more than 50%, supports dynamic simulation of mold assemblies, and helps users automatically generate the mold core and cavity for a broader range of plastic parts, whether using native Inventor or imported files.

Design automation. ILogic technology, acquired by Autodesk last year, is now fully integrated in Inventor 2011 to offer rules-based design and design-automation tools that allow users to easily capture and embed engineering and product knowledge directly into virtual models. Autodesk compares this functionality with AutoLISP automation for AutoCAD, but is quick to point out that iLogic is accessible even to the non-programmer. The new iCopy feature lets users customize commonly used assemblies by automating the process of copying and positioning similar components. ILogic also can be used to build an automated configuration-to-order process.

3D print previews. Use the 3D Print Preview tool for a sneak peek at how a 3D printed prototype will look. 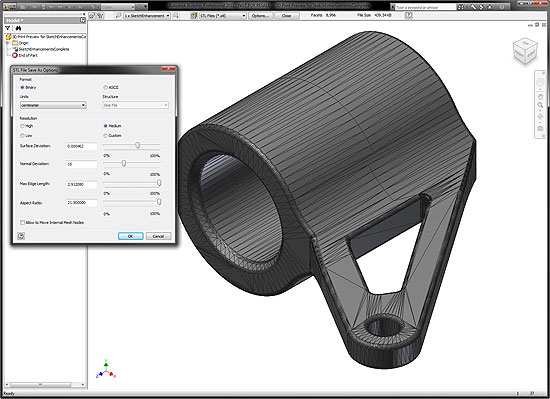 The 3D Print Preview in Inventor 2011 displays an accurate representation of the printed model. 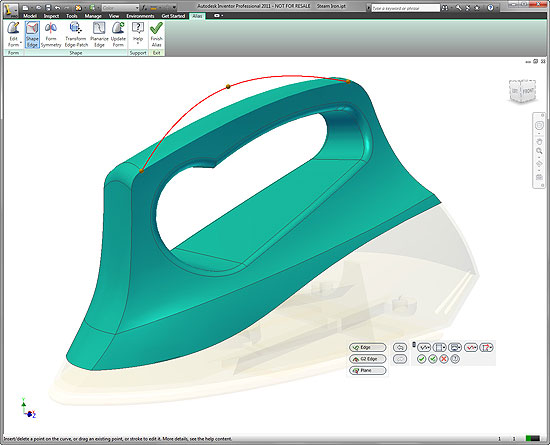 Integrated freeform shape modeling capabilities are now available directly within the Inventor environment with the addition of Alias Design for Inventor 2011.

Following its run as a technology preview on Autodesk Labs, Inventor Publisher ($2,500) debuts for creating clearer, more comprehensive technical instructions based on 3D CAD data. The software operates on a simple import-author-publish workflow.

The Flash format lets users create animations to convey design ideas, communicate assembly instructions, and more. Autodesk's patent-pending algorithm is behind a feature that can automatically "explode" a design to show disassembly. 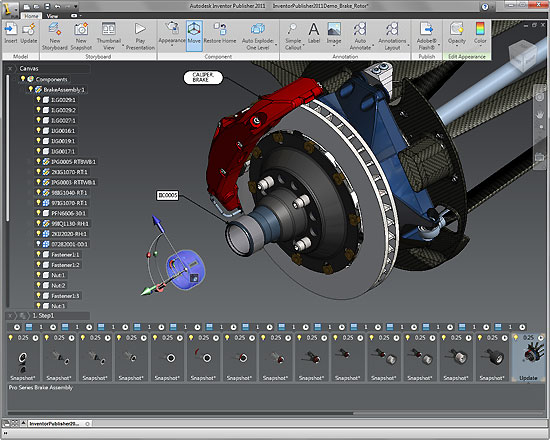 The Inventor Publisher 2011 interface is designed to be simple enough that even non-CAD users can work with CAD-based data to create exactly the product documentation they need.

Other developments in the line of Autodesk products for digital prototyping include the following:

Time for a Hardware Upgrade?

With all the advances to design visualization and simulation functionality in the 2011 product line, will users need better hardware to support a software upgrade? Not necessarily, according to Kross. He said that new versions of Inventor, Algor, and Moldflow will leverage GPU power for those users who have it, and added that improvements throughout the 2011 line will be apparent without extra hardware investment.

A requirement for new product visualization in AutoCAD and Inventor was that it function efficiently without special hardware, said Amy Bunszel, director of mechanical products. But if you do upgrade to current processing technology, she added, "you will see some very noticeable gains" in 2011 product performance.

Kross also touted the relatively new Sketchbook Pro, a $7.99 drawing and painting application for the Apple iPad. "Most competitors don't have a product like this," he stated. The mobile app joins Sketchbook Mobile for the iPhone, released last year.

Product availability may vary by country, so consult the purchasing options listed on the Autodesk web site.

A review of Autodesk Tech Day for AEC is here:

Watch for a First Look review of Inventor 2011 coming in the summer 2010 edition of Cadalyst magazine.