AIA 2012 Comes Home to the Capital

The American Institute of Architects holds its annual convention among the nation's most iconic buildings.


The American Institute of Architects convened in its hometown of Washington, D.C., for the AIA 2012 National Convention and Design Exposition in May. Traditionally moving the event from city to city — locations in recent years have included New Orleans, Miami, and San Francisco — the association used the relatively rare return to its home base as an opportunity to explore the impact of architecture on society. AIA President Jeff Potter explained the conference theme, "Design Connects," noting that architecture can create "a home, a sense of place, a rootedness that connects us to each other."

During the opening session, Architect of the Capitol Stephen Ayers lauded the leadership role that architects have played in Washington. "What symbolizes our freedom and democracy," he asked, "more than our U.S. Capitol building?" In his keynote speech, historian and best-selling author David McCullough addressed the deep connections between architecture and history. "The most important art of all in understanding who we are, and why we are the way we are, is architecture," he said.

On the second day, Housing and Urban Development Secretary Shaun Donovan decried the once-trendsetting urban renewal philosophy that viewed inner cities as unsalvageable and called on AIA to take a leadership role in encouraging reengagement with troubled urban neighborhoods, saying he wants more architects to use their talents to bring health and efficiency to cities. That same morning, Steven Holl, FAIA, 2012 recipient of the AIA Gold Medal, told the crowd of 3,000 in attendance that "architecture is about collaboration" and its "unspoken power is to inspire and transform the quality of our day-to-day lives."

Little was said during the keynotes about the software and hardware that enable modern architecture, and as is usually the case at AIA conventions, the focus and tone of the general sessions carried over to the classroom sessions. Overall this year, we encountered limited information relating to design technologies, other than those solutions on display in the expo. (Look for coverage of the AIA Design Expo in Part 2 of this article.)

One of a few sessions devoted to BIM (building information modeling) technology was "The BIM Scorecard: An Objective Approach to Improve BIM performance and Worldwide BIM Knowledge." Led by Calvin Kam and Tony Rinella of bimSCORE, it provided an overview of the service that helps firms optimize their use of BIM by evaluating planning, adoption, technology integration, and performance. Rinella reviewed how the BIM scorecard was developed and what the organization has learned about BIM integration along the way. Great BIM must not only have good planning, he said, "It must have legs. Good ideas are converted to actions." 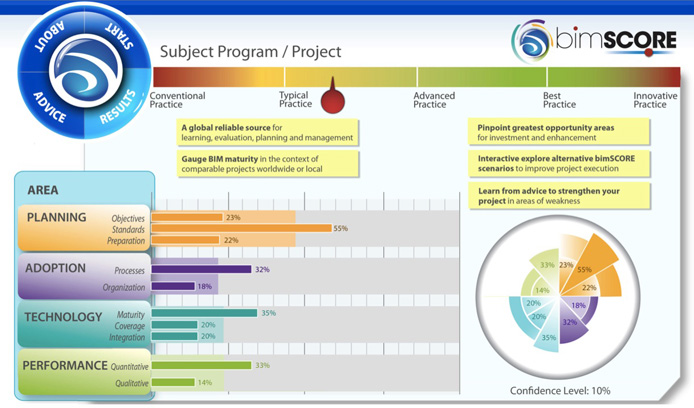 BimSCORE helps AEC firms and building owner/operators to plan, optimize, and evaluate their use of BIM technology.

BIM was not the only building trend garnering attention in the educational sessions; sustainability was another recurring theme. During "The Sustainable Smithsonian," Susan Ades, director of exhibits at the National Zoo, described the institution's ongoing pursuit of LEED certification and its efforts to use solar-heated water, sustainably harvested hardwoods, and green roofs in its exhibits.

In "The Recovery Process in Sendai, Japan," which examined the aftermath of Japan's 2011 earthquake and tsunami, Kit Miyamoto — CEO of the Miyamoto International structural engineering firm — decried building codes that protect human life during earthquakes, but result in irreparably damaged highrises. According to Miyamoto, it costs just 3–5% more to integrate shock-absorbing devices that can help buildings retain their usefulness after major earthquake events.

"Implications of Alternative Work Cultures on Urban Planning" explored ways in which a mobile workforce that's at least partly home-based can lower real estate costs, ease congestion, and reduce the environmental impacts of commuting. "We're hopeful that Congress will pick up on these concepts, and begin to rethink the way they do business," said Stephen Ayres.

The AIA 2013 National Convention and Design Expo is scheduled for June 20–22 in Denver, Colorado.