Rendering software, printing solutions, and more were on display at the American Institute of Architects' National Convention and Design Exposition.


(Click here to read Part 1 of this two-part series.)

As has come to be expected, design technology found its way into the AIA Expo at the booths of a few dozen vendors. Following is an overview of what we saw there.

SmartBIM's VIMtrek is a rendering and collaboration plug-in that converts Autodesk Revit files into freely navigable 3D walkthrough environments. The rendering software incorporates compression technology that makes files interactive and one-tenth the size of a traditional render — and reportedly reduces rendering time to just minutes. File recipients can use the Viewer tool to navigate and annotate the 3D model on a PC or Mac or via a web browser.

In the AIA exhibit hall, SmartBIM was demonstrating its new ecoScorecard tool, which integrates with Revit and SketchUp so users can assess the environmental characteristics of building components directly from their design software. The web-based tool, which is free and currently available, is being fleshed out continuously; the company is working with manufacturers of building components to populate the ecoScorecard database.

SimTread can graph traffic flow rates over time, as well as cumulative traffic flow, and can output simulation data. Users need not be familiar with using Vectorworks or other design software; the tool can conduct studies based on PDFs, image files, and DWGs. Like Vectorworks, SimTread runs on Windows and Mac platforms.

SimTread was developed by A&A Company, Waseda University, and Takenaka Corporation. Pedestrian simulation was based on extensive research of actual human behaviors. 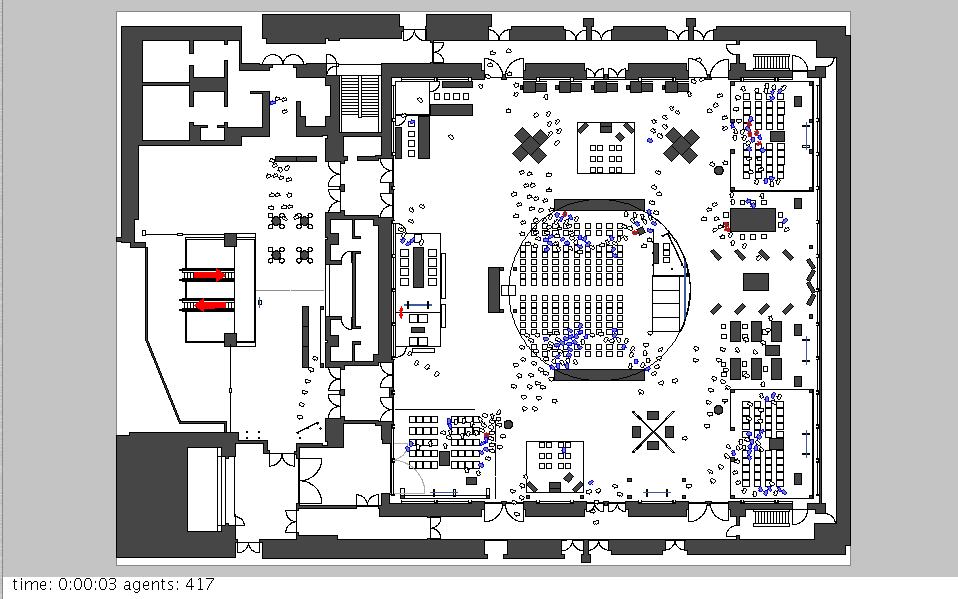 SimTread simulates the egress of people from a building, displaying traffic flow patterns, time lapsed, and the number of people yet to exit. Red spots highlight problem areas.

In the Nemetschek booth, CadFaster was discussing the new CadFaster|Collaborate for Vectorworks plug-in, which compresses 3D CAD and BIM models to a size that can be e-mailed or downloaded from a link. File recipients, who do not need a desktop client, can view and mark up models remotely and share feedback in real time, even from a laptop or iPad. Users can collect, manage, and share those file markups. CadFaster|Collaborate is also available for Autodesk Revit, Bentley MicroStation, and SolidWorks. Tuomas Holma, vice-president of sales and marketing at CadFaster, told Cadalyst, "We have found our opportunities to be in AEC," and more plug-ins (presumably for AEC applications) are forthcoming.

GRAPHISOFT demonstrated the new MORPH tool in its ArchiCAD 16 BIM software for architects, which allows users to create freeform elements directly in ArchiCAD, either from scratch or based on an existing BIM element. MORPH has no geometric limitations, so every node, edge, and surface can be moved and shaped in any direction.

The new built-in Energy Evaluation functionality of ArchiCAD 16 is similar to the former standalone EcoDesigner product, but is based on entirely new technology that allows architects to perform energy evaluation of BIM models within ArchiCAD based on geometry analysis and hour-by-hour weather data. ArchiCAD 16 is accompanied by upgrades to the BIM Server, support for the IFC 2x3 Coordination View Version 2.0 for facilitating OPEN BIM, and enhancements to the BIMx for ArchiCAD presentation and communication tool, which allows users to share architectural designs on a mobile device. With ArchiCAD 16, cloud-integrated model sharing is available to BIMx users, and viewing can be enhanced using 3D glasses.

ARCOM announced e-SPECS for ArchiCAD, a new version of the e-SPECS specification-management product line for commercial construction. Available to licensed users of ARCOM's MasterSpec building-specification system, it fully integrates with ArchiCAD. The company also announced the new Historic Preservation Library within MasterSpec, which it calls a first-ever release of specifications dedicated to addressing historical treatment, and the fall 2012 release of a Mac version of its Masterworks productivity software for word processors.

ArtVPS, developer of the Shaderlight 3D rendering software for SketchUp, introduced Shaderlight Cloud Rendering powered by Limitless Computing. By moving SketchUp rendering from the desktop to the cloud, the service is said to render animations as much as 30 times faster and scenes as much as five times faster — and it frees up desktop computers for other work. Pricing will start at less than $10, according to ArtVPS.

Martin Cox, senior technical and support manager for ArtVPS, explained that because users can see how the image is developing, they can stop the rendering process partway through to make changes. "With other packages, you get to the end [before you] realize you've done it wrong," he said. Cox also demonstrated that users can import their own photographs to use as model backgrounds, or position the model against a preset or custom background.

We stopped by the Integrated Environmental Solutions (IES) booth on the AIA show floor and had a look at the new solar energy–analysis tools in IESVE 2012. ModelViewer II features solar shading, solar arc, and improved reporting capabilities and is available to all VE-Gaia and VE-Pro users. Significant solar-analysis features also have been added to the VE-Pro module SunCast, allowing users to view solar energy and intensity related to the 3D model as well as real-time shadows based on a specified date and time. The new solar arc tool visualizes the sun's position in the sky in relation to the 3D model. Users can create video animations across time periods, and improved camera-path functionality supports video creation as well as reporting. Supported video file formats now include AVI, MPG, MP4, and WMV. 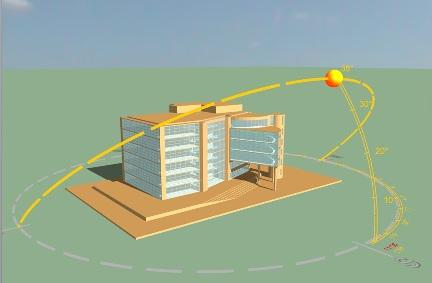 The SunCast module for IES VE-Pro includes a solar arc tool for visualizing the position and effects of the sun relative to the 3D model and based on a specified date and time.


HP hosted a media event at AIA 2012 to introduce new mobile and cloud-based printing solutions for its HP Designjet systems, including a free Android app for HP ePrint & Share, the company's free web-based service that allows AEC customers to access and print drawings from any location via a laptop, mobile device, or the touchscreen of an HP Designjet ePrinter.

Other new features of the HP ePrint & Share service include the ability to print PDF files directly from e-mail, improvements to the free iPad app, and access to ePrint & Share directly from Autodesk's AutoCAD WS, which enables printing of AutoCAD files from virtually anywhere via a web browser or mobile device.

Emre Ozguc, worldwide marketing director, HP Designjet Business, said the annual technical design market for printing will amount to $1.1 billion by 2014, and HP currently controls 70% of it. That market is the primary focus of his group, he said, noting that "paper is still a vital part of the design and review process; there's no substitute for a large-format printout." The group is capitalizing on three key trends in the AEC market:

E-conferencing software used with the SMART Board allows people in two locations to share a whiteboard screen; as many as 500 connections can interact if they have a SMART Board or observe via a regular computer. An available iPad app offers all the same interactive whiteboarding functionality except screen sharing.


This video demonstrates how users can directly manipulate 3D models in Navisworks on a SMART interactive flat-panel display.

SMART Boards have direct support for a variety of commonly used software solutions, such as Microsoft Office. The Navisworks plug-in is the first CAD-related offering.

The idsDesignTOUCH Autodesk Navisworks Manage plug-in for SMART Board sells for $695 per license. SMART Boards sell for $7,000–$10,000, depending on size.