Portfolio Balancing and the iWare Apps site offer users new ways to manage their software investment — and to access some tools for free.


The arrival of mercurial March heralds change, even in the CAD world. This month, Bentley Systems — which provides solutions for sustaining infrastructure — held its first-ever Annual Corporate Update conference call. In addition to performance and acquisition updates, the company used the forum to unveil two major initiatives: a new software licensing program and a web portal that provides access to free interoperability software.

The first of these initiatives, which Bentley dubbed Portfolio Balancing, enables new software license customers and existing Bentley SELECT subscribers to "trade in" underused licenses. Bentley COO Malcolm Walter explained, "Over the years we have learned that our user organizations' software needs change as their businesses change, which is a given in AEC (architecture, engineering, and construction). The mix of applications now required could be very different from the mix in use, say, five years ago."

Product Marketing Manager David Huie told Cadalyst: "Portfolio Balancing enables subscribers to exchange underutilized Bentley software for other Bentley software of equal value. So, there is of course no license cost involved. And the Portfolio Balancing activity should not substantially impact their annual subscription fees, since the subscription fees for all of our products are directly proportional to the list price of the software, although at slightly varying rates, depending on the product.

"As to Bentley revenues, we believe that this new 'sustainable licensing' business model, driven by Portfolio Balancing, will provide Bentley with an even greater competitive advantage in the marketplace which will result in increased market share."

Bentley executives also announced the launch of the iWare Apps site, which will host the company's no-cost software focused on interoperability, including Bentley View, the i-model plugin for Revit, and Structural Synchronizer. The portal also links to free training and reference documentation, as well as interoperability-facilitating apps developed by other organizations. 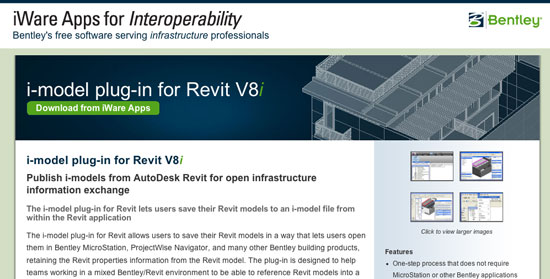 This launch is the latest in a string of interoperability initiatives from the software giant, including the introduction of i-models (which are "containers" for infrastructure information exchange) and Integrated Structural Modeling (a methodology for sharing structural project information across multiple vendors' applications).

Huw Roberts, Bentley's global marketing director, Building, told Cadalyst that Bentley has still more interoperability efforts planned: "The i-models and the iWare Apps site are two aspects of Bentley's overall commitment to helping AECO users achieve interoperations through software interoperability. We have new iWare Apps in the pipeline, and will also continue our efforts in support of industry standards such as IFC, ISO 15926, and a long list of others. And of course we will continually promote open infrastructure information exchange across Bentley's portfolio of applications and with other software common to our users' project workflows."

Looking Out to Sea

A report on Bentley's 2010 performance and the acquisition of SACS www.bentley.com/SACS structural analysis software from Engineering Dynamics rounded out the day's announcements. SACS supports the engineering, operation, and maintenance of offshore structures, including oil platforms and wind farms. The software's modules enable users to generate an offshore structural system model, then subject it to various stresses.

Commenting on the acquisition, CEO Greg Bentley said, "With respect to Bentley's strategy to realize the potential of information modeling through integrated projects for high-performing intelligent infrastructure, offshore structures provide an important opportunity. With increasing demands for offshore resource exploration, requirements for even better safety are obviously paramount."