Autodesk, Siemens among the supporters of CG/LA Infrastructure’s Blueprint 2025 initiative.


Although political positions vary widely in this country, especially when it comes to the touchy topic of government spending, there’s near-universal agreement that U.S. infrastructure needs attention — and major investment. And the United States is hardly alone: bridges, water treatment plants, and other essential elements of infrastructure threaten disaster worldwide because they’re at the end of their useful life, aren’t designed to withstand threats such as earthquakes, or have simply been rendered inadequate by the demands of growing populations.

But while the problem may be clear, the path to rectify it is not. A host of questions remain: How much money should be directed into the effort? What portion of the burden should be shouldered by the federal government, vs. state governments? What role should the private sector play? Should regulations be altered to facilitate more or faster building, and if so, how? How should projects be prioritized? How can job creation be maximized? 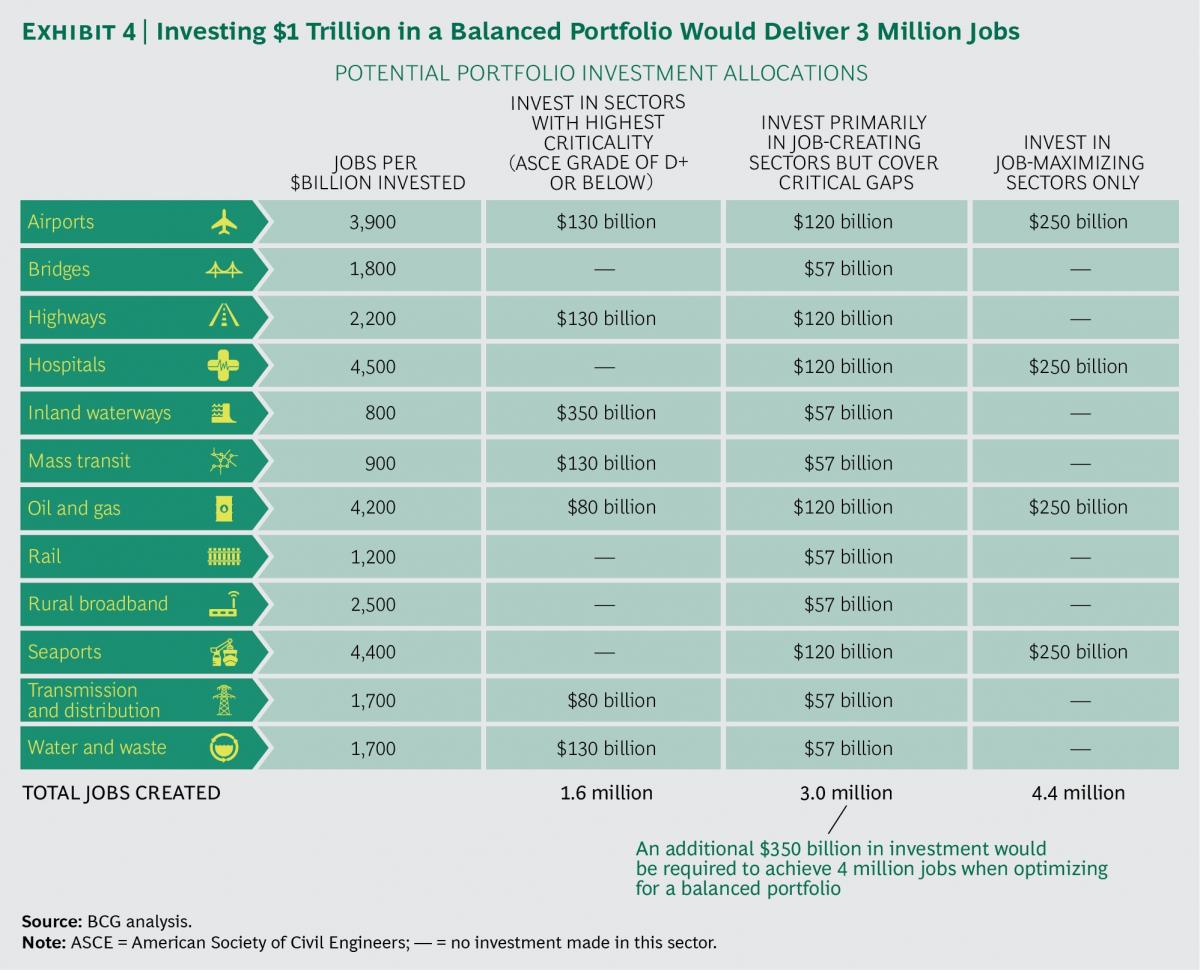 The Boston Consulting Group and CG/LA estimate that a $1 trillion investment in a “balanced portfolio” of infrastructure sectors, including some with high job-creation potential and others that are less job-focused but crucial to economic productivity nonetheless, would deliver about 3 million direct and indirect jobs.

CG/LA Infrastructure, an infrastructure consulting firm headquartered in Washington, D.C., has taken an ambitious approach to sorting out these questions. In preparation for the change of presidential administration in 2016, CG/LA assembled Blueprint 2025, a coalition that comprises 100 industry executives and public-sector representatives to identify and promote increased infrastructure investment in the United States.

The Blueprint 2025 collaborators created a framework, or “blueprint,” for U.S. infrastructure development and a roadmap for 2017–2025 to implement that vision. The blueprint details 19 recommended actions, organized into 10 themes or “action areas.”

According to CG/LA, 16 of the 19 recommendations have been implemented by President Trump's administration, to some extent. An April 2017 update to Blueprint 2025 ranked progress in two of the action areas, Institutional Redesign and Business Models, as very low; three others, Technological Revolution, Regulatory Transformation, and Strategic Projects Focus, showed a high level of progress, according to the report. Progress in the remaining five areas was rated as low.

CG/LA and the Blueprint 2025 coalition will continue to advocate for eliminating regulatory impediments, facilitating private sector investments, and spurring conversations between the private and public sectors.

Support from the CAD Sector

A variety of technology companies are among the supporters of the effort, including a couple of names familiar to CAD users: Autodesk and Siemens. Although not a member of the coalition, Siemens was a sponsor of the inaugural Blueprint 2025 Leadership Forum, during which members of Blueprint 2025 met with members of Congress and representatives of the Trump administration. It's logical that Siemens would have an interest in the initiative, since the company "works with cities across the U.S. to put technology to work that reduces energy, improves our transportation systems, makes buildings smarter, and revitalizes our manufacturing base," as a Siemens spokesperson put it.

Cadalyst: Why did Autodesk decide to support the Blueprint 2025 effort?
Bennett: Autodesk was one of the founding members and originators of this effort. Formed two years ago, the purpose of this group was to prepare a comprehensive infrastructure plan for the next presidential administration and help them drive it forward once the president took office. The Blueprint 2025 report and initiative is focused on visionary leadership in the pursuit of world-class infrastructure.
This effort follows up and builds upon the “Making the Grade’ industry effort and report led by Autodesk in 2014 with support from 45 engineering companies. Blueprint 2025, led by CG/LA Infrastructure’s CEO Norman Anderson, comprises 100 private sector executives (from technology, finance, and engineering industries) and public sector representatives focused on increasing investment in U.S. infrastructure. Autodesk is the technology thought leader and expert resource for this effort. The plan is built around ten themes and nineteen recommendations crowdsourced from the industry. Of these nineteen, the Trump Administration to date has adopted sixteen.
How do you anticipate the market for CAD, BIM, visualization, and related software will change, should the desired level of investment in infrastructure take place?
The standard of capability today of technology is far beyond the standard of practice in use, but the focus of this effort is the fact infrastructure creates economic growth, opportunity for our country, and creates competitiveness for providing innovative approaches to age-old problems of transportation, water, power, etc. Infrastructure is all the physical systems that a community needs to operate, and as such need to be kept in the best working order possible, as it’s for the public good.
Oftentimes antiquated regulations, approaches, and standards, including contracts, curtail — and are even barriers to — the innovation potential that exists within engineering firms today with the tools they have, including BIM, generative design, and cloud-based analytics and processes. As part this effort to modernize all aspects of the infrastructure workflow from permitting to delivery, those firms doing the work will get to use the latest tools to their fullest potential, ensuring that what gets produced is innovative and the best possible vs. the most practical.
What will be the impact of greater infrastructure investment on Autodesk software products?
This effort was not about software sales or products. It was about transformative infrastructure projects that could start tomorrow creating economic competitiveness and jobs by having world-class infrastructure to support our economy. As it relates to technology, the objective is for planners, designers, contractors, and owners to leverage the best technology possible (much of which they already have), but focus the approach to anticipate and mitigate risk on projects, enabling these projects to be more efficient [and] delivered on time and on budget to maximize taxpayer and investor dollars while expanding horizons of what we thought possible.  It’s about designing truly innovative, resilient, sustainable infrastructure for this generation and the next that maximizes lifecycle returns while lowering lifecycle costs. We have been meeting with the Administration to discuss these issues and how we can make the U.S. a more infrastructure-friendly environment.
Through this process of innovation, many approaches and tools used will see the benefit of ideas generated when infrastructure professionals not only try to build the infrastructure right and mistake-free, but take the approach to deeply analyze and simulate alternatives approaches to determine, Is this the right infrastructure to build in the first place? Making sure it’s the right project before getting the project right is the way to ensure the most critical infrastructure we need gets done first.