CAD for the Field


Third-generation wireless (3G) is on the horizon, attracting attention to mobile computing devices such as PDAs (personal digital assistants) and tablet PCs. Although already implemented in Japan and parts of Europe, 3G has yet to become popular in North America. In February 2002, Verizon Wireless introduced its 3G Express Network in select regions, including Salt Lake City, Silicon Valley, and parts of the East Coast. Offering vastly improved speeds (up to 144KB per second), it opens the door for an expanded menu of services such as Internet browsing, connectivity, and multimedia applications. The network is the first commercially launched service of its kind in the United States, and vendors anticipate 20 to 40 million North American users by the year 2007.

Handhelds are slightly larger than PDAs and come with small keyboards. They also run Windows CE. Tablet PCs that run Windows XP for Tablet PCs will appear in the second half of this year (figure 1). These small wireless wonders will feature Intel 800MHz or better processors and 10" TFT screens, but will not have keyboards.

All these concepts, from PDAs to tablet PCs to laptops, feature pen-based input. Some of the devices, such as Pocket PCs, even have built-in cellular phone capability. Tablet PCs will arrive with built-in cameras and handwriting and voice recognition (figure 2). Computing power is increasing, and the demand for architectural and engineering software for these portable devices is also increasing. 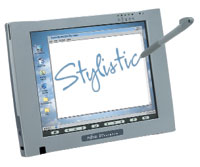 Figure 2. The Stylistic 3500 from Fujitsu Corp. brings full-featured, pen-based computing to the field.

Software Options
The main CAD options for the Pocket PC are Arc Second's PocketCAD 4.0, GiveMePower's PowerCAD CE, and Autodesk's Onsite Viewer. None of these programs are available for the Palm operating system. PocketCAD 4.0 and PowerCAD CE are true CAD programs that you can use in the field to draw or edit CAD drawings. Autodesk's Onsite Viewer supports viewing, redlining, and annotation only. Because these programs sit on Microsoft's ActiveSync, you can automatically synchronize work done in the field with your desktop PC through a serial or USB port or wired or wireless network connection. 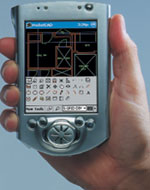 Whether it is hooking up to a Laser Ranger meter (a laser measurement product made by HILTI) for doing an asbuilt drawing or plugging in a GPS receiver for data collection, Arc Second wants you to be able to work with your files. It sees its software as a highly functional, mobile "decision tool." In general, PocketCAD is not desktop CAD squeezed onto a handheld. It was designed from the ground up to take advantage of the PDA's strengths while also avoiding some of its shortcomings.

You can print PocketCAD 4.0 files directly from the mobile device to a variety of infrared enabled printers using the PocketCAD Printer Driver. The Printer Driver is sold separately ($19).

PowerCAD Classic includes nearly 300 powerful design creation and editing functions. PowerCAD CE Pro adds sophisticated 3D object creation and complete system customization using Lisp and C/C++ programming. The PowerCAD CE 5.1 update, due out in late May, adds new markup tools, an Autohide button that toggles between screens, and support for audio notes that are saved with the drawing file. All CE versions run on all popular Pocket and handheld PCs that run Windows CE 3 or higher.

Autodesk OnSite View 2 and OnSite Enterprise 2
Autodesk OnSite View 2 is an easy-to-learn pen-based viewer that lets you view, mark up, and measure your drawings electronically, with little to no learning curve. Autodesk OnSite Enterprise 2 delivers live, interactive digital design, mapping, and database information from your organization's central server to Windows CE–based mobile computing devices, so critical information is available where it's needed. Users can access, analyze, and update data remotely, without the integration and duplication issues that can occur with other mobile applications.

CAD for Laptop and Tablet PC's
When tablet PCs appear, you'll be able to operate standard AutoCAD in the field and upload files to your computers at the office. The same is true today with the tough laptops. Autodesk Architectural Studio 1, Autodesk's latest AEC software, is intended for preliminary design. Although you can run this software on any standard computer, it was designed to work on penbased tablet PCs (see feature story for more details).

CAD Isn't the Only Field Tool
Strata Systems LC publishes Punch List Software, which helps you keep track of tasks in the field. If you need to know when the contractor should be finished, this software is for you. Punch List Remote ($199) runs on any Palm device except the Pilot 1000 and 5000 (figure 4). Arc Second is developing a punch list add-on (PocketCAD PunchList) for release in June. 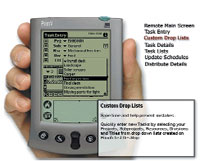 Figure 4. Punch List Remote runs on any Palm Computing platform device except the Pilot 1000 and 5000.

PowerPoint and Windows Media Player are available for the Pocket PC, too. Lastly, the Pocket PC has a builtin microphone so you can dictate instructions and comments. You can even use voice recognition software to automatically convert your verbal notes into type at the office.

In the near future, we'll be able to do as much work on site as in the office. Everything will be instantly connected, and collaboration will be the standard. Look forward to instantly accessing any document on your computer or the Internet, or photographing a site feature in both still and motion and sending those images directly to the client.

About the Author: AIA

About the Author: H. Edward Goldberg