Port of Long Beach expects to save more than $3 million from CAD file management efficiencies alone.


The Port of Long Beach, California, moves goods valued annually at more than $140 billion, making it the second busiest seaport in the United States. In 2007 alone, the port handled 7,312,465 containers -- 13 percent of the U.S. total -- carrying everything from clothing and toys to furniture and consumer electronics. Specialized terminals also move petroleum, automobiles, lumber, and other products.

Located 25 miles south of Los Angeles, the port provides terminals for nearly one-third of waterborne trade passing through the West Coast, a volume that is growing at a compound annual rate of 8.5 percent. Covering 3,200 acres, the facility is comprised of seven separate container terminals, 10 piers, 80 berths, and 72 post-panamax gantry cranes that work around the clock to extract or load the containers onto some of the 5,300 ships that enter the port every year.

The port is not only an impressively efficient commercial operation, but it has also been at the forefront of combining growth with a focus on making the operation environmentally sustainable through efforts to reduce pollution from trucks, diesel locomotives, and docked vessels.

Committed to Leadership
The professionals charged with providing infrastructure to support this burgeoning sea trade are committed to becoming technology leaders in the port facilities industry. Standardizing on a common CAD/GIS platform was a strategic component of a $26 million, five-year technology plan initiated in 2007 for the Port of Long Beach, a department within the city of Long Beach. The CAD/GIS project will improve the quality, efficiency, and accessibility of engineering data as well as deliver interoperability with existing GIS data. A comprehensive standards manual will leverage and enforce the new platform and ensure accurate infrastructure as-builts.

“The main objective of this project was to make the Port of Long Beach a leader in engineering design of infrastructure,” said CADD manager Michael Kolster. “We are already one of the largest ports in the world and seen as a leader in the port industry. We are recognized as a leader on environmental issues and port security, and it was time to lead in engineering technology as well.”

One of the reasons that standardizing on interoperable software is such an advantage is because the port has to manage such diverse classes of infrastructure. The Port of Long Beach standardized on Bentley System’s engineering and geospatial software, which allows it to manage the entire portfolio of assets -- from bridges, roads, rail facilities, water, and wastewater networks; the communications network; and marine structures. Bentley also provides the technology to create and edit the base maps on which all this infrastructure is located and designed.

The CAD/GIS project plan called for replacing multiple disparate engineering software programs that required the time-consuming re-creation of data and had no central storage for project files. The new platform seamlessly integrates the design processes and products. Following Kolster’s demonstration of the long-term financial and technical benefits of a new, integrated system, the Harbor Board of Commissioners approved departmentwide conversion to the Bentley solutions platform.

“Bentley’s ... integrated CAD, GIS, BIM [building information modeling], and server technologies make our users more productive and allow our engineers to focus on design rather than technology,” Kolster explained. “This project will help our staff easily access accurate digital information for the first time since migrating from the drafting board. We are confident that these improvements will make us more competitive in the coming years.”

One workflow reform that illustrated the potential time savings was the transfer of mapping data from the survey department to engineering. The survey department had been creating terrain models that would be converted from electronic format to PDF file format to printed copies for field notebooks, and then these prints would eventually be scanned and manually recreated in electronic format. The cumbersome process involved several file conversion steps and ultimately placed duplicate files in multiple data storage areas. Finding files required searching seven mapped drives.

Using integrated Bentley products, the survey department now processes GPS data in InRoads. Engineering designers use the ProjectWise Connector for ArcGIS to pull as-built data and begin working with no data conversion. ProjectWise serves as the centralized document management system and requires just one mapped drive. Assuming a workload of about 200 projects per year, Kolster estimated that the improved workflows across all functions -- from finding and assembling project data to as-built validation and clean-up -- will save more than 200 man-weeks per year, for a total annual cost savings of about $540,000. 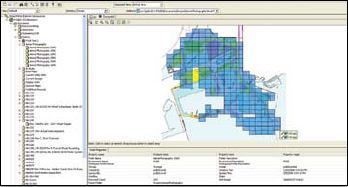 The port’s engineering documentation can be quickly accessed through
the spatially enabled version of ProjectWise (Bentley Geospatial
Management). 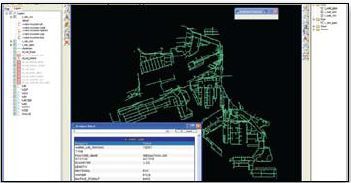 Bentley Map supports the mapping and analysis of infrastructure assets –
in this case the port’s water network.

The ongoing engineering and construction projects managed by the Port of Long Beach provide the port industry with state-of-the-art seaport facilities. Sea trade and transportation is a major economic force, and the Port of Long Beach currently generates about $16 billion in annual trade-related wages statewide and supports more than 1.4 million jobs throughout the United States. As the Port of Long Beach becomes more efficient in its ability to design and build infrastructure, it will contribute to the growth of the local and national economy.