Revamped new version offers 30% to 40% faster performance and much more for Windows- and Mac-based 3D design visualization and animation. 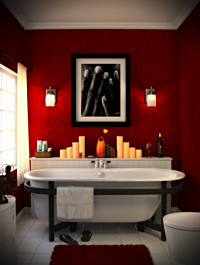 When Luxology launched the original version of its modo 3D content creation software in 2004, the company created a community web site for all 3D users to explore all aspects of 3D. Introduced this week, the latest release "goes back to the users," said David Tracy, community director, incorporating extensive user input about how to improve the software. "We have revamped the entire program; virtually no area was left untouched," Tracy said.

Available for both Windows and Mac platforms in a single license and running on the CPU, modo 501 offers improved modeling and sculpting functionality, 30% to 40% faster rendering on average, ray-traced viewports, and an introductory release on 64-bit Mac OS X. An enhanced toolset delivers increased productivity and performance for 3D artists in engineering and architectural design visualization, media and entertainment, game development, and computer-generated imagery (CGI) for print. 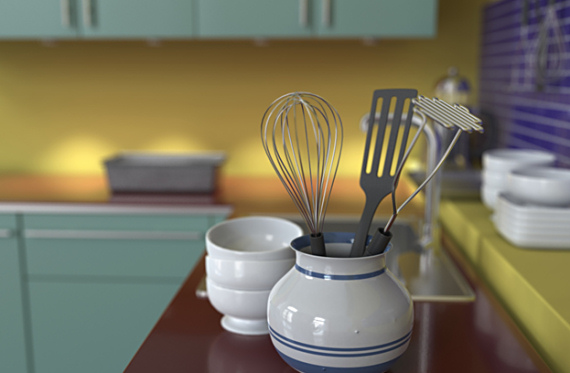 Colors, textures, and reflections are more realistic and render more quickly in modo 501, as shown in the two images above.

New and improved features in modo 501 include:

Rendering. Ray-tracing speed as well as depth of field and bump mapping quality are improved. The Preview Renderer now progressively renders to near final quality and can prioritize updates in areas where users scrub with a mouse or pen. "With nearly everything, you're going to see a speed increase," said Tracy. "For animation, you'll see a huge increase." 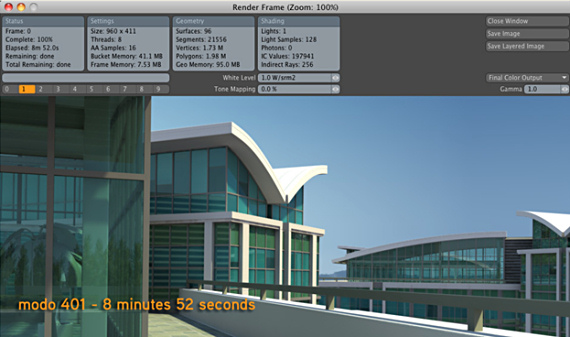 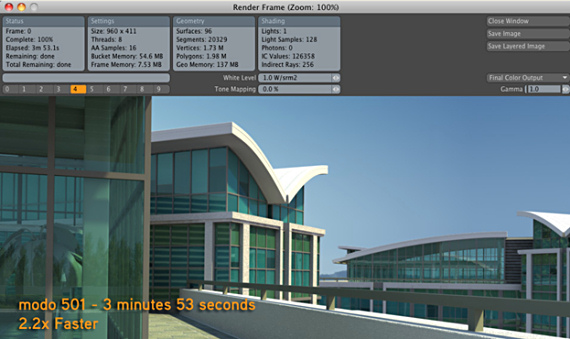 A complex architectural rendering generates more than twice as quickly in modo 501 (bottom) compared with the previous version (top).

A new Displacement as Bump feature allows users to customize the high and low points of texture in a rendering, resulting in much-improved image definition with much less effort. Faster rendering is facilitated by new view frustrum culling, whereby the system renders only the portion of a model that the user is viewing on screen.

User experience. The new RayGL viewport option lets users model in a ray-traced environment, effectively merging modeling and rendering. The Help system, now web-based, has been overhauled and equipped with a better search engine as well as a commenting and rating system so users can supplement existing documentation.

Sculpting. Sculpting tools in modo now work on multi-resolution meshes, facilitating both coarse and fine adjustments to surfaces as needed.

Fur. Styling tools have been enhanced and modo renderings can now exhibit stray hairs, plus a range of kinky and frizzy looks. A new "billboard" capability provides efficient visualizations of trees and leaves.

Software Developer Kit (SDK). Improvements to the modo SDK enable third-party developers to introduce new items and tools into the modo workspace. Luxology is working with leading developers to create a new generation of plug-ins that will extend modo even further.

For CAD data visualization in particular, noteworthy updates include the following:

Modo 501 directly supports SolidWorks and Bentley Systems MicroStation (the latter of which includes native Luxology rendering engine support), as well as dozens of other file formats.

modo 501 is available immediately from Luxology resellers worldwide. Retail price is $995 (no maintenance fees); existing modo users (any version) can upgrade for $395. For more information, view an online visual tour of new modo 501 or e-mail info@luxology.com.