"House of the Year Presents New Translation of Classic Design

Besides its beauty, the Aatrial House was recognized by World Architecture News for its innovation in the creation of a unique atrial concept.


The Aatrial House, designed in ArchiCAD by Polish architect Robert Konieczny, was recently named “House of the Year” by World Architecture News. Designed in collaboration with Marlena Wolnik and Lukasz Prazuch, of KWK PROMES, the Aatrial House reverses the concept of the Roman Atrial House by enclosing the interior atrium and opening the home to its surroundings

Located in Opole, Poland, the Aatrial House is situated on one hectare near forest land. The building was inspired by transformations of a cube, a typical design theme of Polish buildings in the 1970s. Besides its beauty, the Aatrial House was awarded “House of the Year” for its innovation in the creation of a unique atrial spatial model of the house.

Konieczny says that his design inspiration was created by the particular challenges of the site. “The site where the building is designed has one weak point: southwestern access, generating conflict between the driveway and the garden,” he explains. To avoid the functional collision of the driveway and the garden, the driveway was “pushed into" the ground. “This prompted an idea of a driveway leading inside to the ground floor level, from underneath the building, which became possible thanks to the creation of an inner atrium with the driveway in it. This in turn has made it possible to obtain a new spatial model of the building, which is the reverse of an atrial building,” Konieczny said. 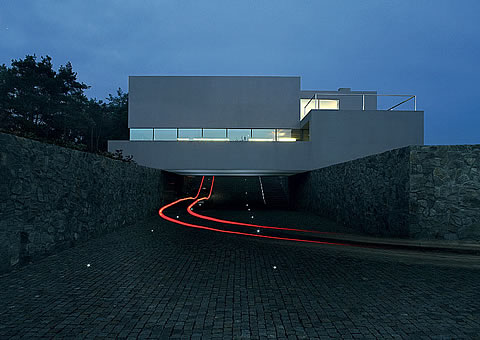 View of the Aatrial House showing the driveway going under part of the house.

As a result of this new scheme, the building opens onto all sides with its terraces in an unrestricted manner, and the only way to get into the garden is through the atrium and the house. The gateway is situated on the highest point of the site and sloping to the east. The 10-meter-wide driveway follows the slope’s declivity, and was lowered beneath ground level while the garden was partly raised. The garden is separated from the driveway and the surroundings with a 2.5-meter-high retaining wall. The building itself is situated on the garden level.

“[The] majority of low-density settlement in the surroundings is formed of ‘cube-houses’,” says the architect, referring to the building’s connection to its location. “The building refers to the neighborhood through its form, which results from various transformations of a cube.” As a result of stretching and bending particular surfaces of the cube, all the walls, floors, and ceilings were defined together with the inner atrium and terraces. This principle of formation created not only the structure of the house, but also defined interior and exterior architecture, including the use of materials. Concrete is the primary material for both structure and finish, with additional elements highlighted in dark ebony. The driveway and retaining walls are quarried granite blocks, the characteristic material of the region. 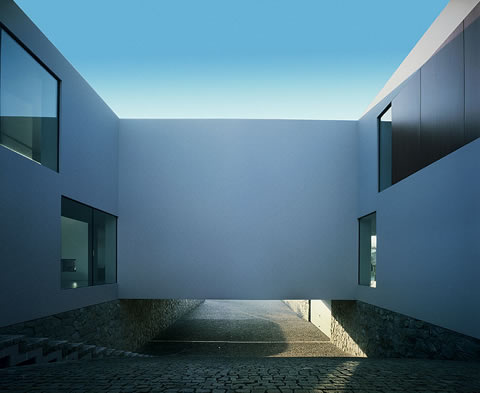 Inside the atrium, with the driveway sloping down and under the main level of the house.

View of the Aatrial House, with driveway located on opposite side.

The architect gives credit to the BIM software for affecting the design outcome. “As the project is very innovative, it entailed a lot of difficulties in the design phase, as well as execution,” he explains. “The most significant one was the driveway. It imposed considerable length [and] the inner atrium could not be too long." Konieczny said careful consideration was required to arrive at an optimal shape and length for the ramp.

“[The BIM software] was very helpful at all stages of the design process,” he continues. “It enabled simultaneous creation of plans, sections, and 3D model as well as constant control of changing layout of the building. It has made it much easier and, what’s even more important, much faster.”