When it Comes to LEED, Platinum is the New Green


About seven years ago, Carol Richard, a partner from the Atlanta-based architecture firm Richard Wittschiebe Hand, bought an empty lot in the tree-lined Sunset Hills neighborhood in Madison, Wisconsin. The plot would become the site of her new home.

Noting the tranquil landscape and the modest homes nearby, Richard concluded she shouldn't build anything "out of whack scale-wise." While planning her home in 3D BIM (building information modeling) software, she modeled her would-be neighbors' homes as well. She wanted to ensure that her house didn't tower over the rest.

The result was an inconspicuous 2,700 sq. ft. modern home smoothly integrated into a series of Cape Cod–style, post–World War II homes. Aesthetically, Richard has succeeded in blending in, but her residence now attracts attention for a different reason altogether: It's the first residential home in Wisconsin to earn the U.S. Green Building Council's LEED (Leadership in Energy and Environmental Design) for Homes Platinum certification.

"My intent was to create a 'light box,'" explained Richard, "with simple forms and clean lines, with large windows to the south." 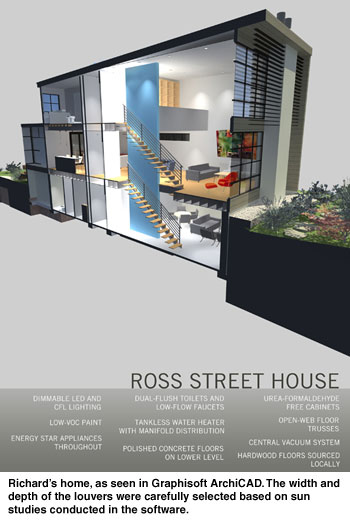 The amount of light admitted into the rooms is controlled by a set of fixed louvers, offset about two feet from the front windows. "The width and depth of the individual louvers and the distance between the system and the windows was carefully calculated using modeling tools so that on June 23 [peak summer], no light penetrates the windows at all, but on December 21 [peak winter], light travels all the way to the back of the space [where the windows are]."

Richard's home is also equipped with low-flow lavatory faucets, low-flow showerheads, and dual-flush toilets, along with a roof washer and a 550-gallon rainwater collection tank. The water efficiency strategies resulted in the home being awarded 12 of the 15 possible points under the LEED Platinum crediting system.

While modeling her home and its surroundings in detail in Graphisoft ArchiCAD, Richard was able to compare the scale of her home with her neighbors' houses. That gave her a good sense of the maximum height for her design.

"When it started out, [our roof] had a much steeper slope," Richard recalled. "But in the end, we went with a flat roof and kept the slope to a minimum. I didn't want our [roof] to be higher than the neighbors'."

The design study also led Richard to select a shade of gray for the exterior that provided a darker finish than she had originally planned. The color matched the environment, as well as the other units already in place. "I wanted [the house] to recede rather than be a large, looming presence," she explained. 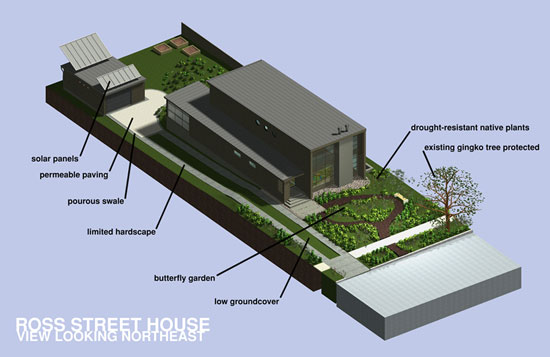 After comparing her home with those nearby, Richard adjusted the height of the roof and the color of the exterior walls to blend in better.

Powered by the Sun

One of Richard's neighbors had grown a large maple tree. You could, in fact, see that tree in Richard's ArchiCAD model. "I modeled that [tree] because I wanted to make sure it cleared our solar panels," she said.

ArchiCAD comes with a series of 3D clip art designs — natural objects and pedestrians — that users can drop into a 3D model. For an accurate representation of her neighbor's tree, Richard specified an estimated height, then let the software generate a 3D object with the right dimensions. Using ArchiCAD's sun study, a feature that let her simulate the sun's effect on her site all year round, Richard was able to determine where the tree's shadow would fall. Her neighbor's maple tree, she was relieved to discover, wouldn't interfere with her solar panels.

Richard's local utilities provider, Madison Gas and Electric, recently published a study of the multifamily homes in the area. According to this study of total electricity and gas costs, residents spend about $0.60 to $1.80 per square foot per year. By this estimate, Richard would expect to spend about $135 to $405 per month on utilities. Instead, she pays an average of $44.21 per month.

Richard and her family moved into the new home in May. Since then, she has had to pay for gas — mostly for cooking purposes, as her heating system is energy-efficient — but she has not had to pay for electricity. The photovoltaic panels on her roof generate more power than the home needs. She's been depositing the excess energy back into the grid to help power her neighbors' homes. Her home was awarded 28.5 points out of the 38 possible points under LEED's energy and atmosphere category.

In ArchiCAD 12 (released in July 2008), Graphisoft introduced a new energy analysis module called EcoDesigner, accessible from the modeling environment via a single click. The new feature lets users group related building components (such as external walls and floors); apply material properties; define usage (residential, retail, hospital, and so on); specify the mechanical, electrical, and plumbing systems; and then obtain an estimate of the building's carbon output and monthly energy consumption.

Richard didn't have a chance to put EcoDesigner to the test during the planning of her home, but she has since created an energy report using the module, based on her home's as-built conditions. She hopes to compare the software's estimates and the building's actual energy use after she's gathered enough data.

"Deciding to build our house as a LEED project wasn't an easy choice," Richard revealed. "There were expenses associated with that, " such as investing in photovoltaic panels. “The program is geared more towards builders than owners, so it was an interesting experience for us. But along the way, we learned to build a more sustainable, durable house. " (Durability analysis is one of the requirements of LEED Platinum certification.) 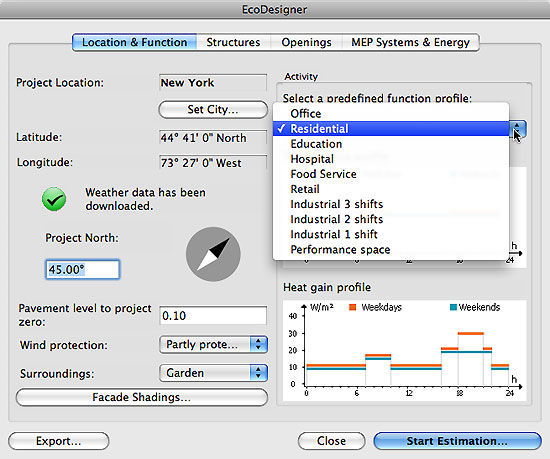