Police now save hours of security preparation and planning for campus events.


CAD and design professors Bill Javins and Jim King of the Community and Technical College at West Virginia University Institute of Technology (WVU Tech) were thrilled when the State Capitol police requested they build a tabletop model of the state capitol campus in Charleston, West Virginia. "The project presented many design and resource challenges, but we were excited to dive into such an important project," King said.

The capitol campus model was needed to help plan and coordinate security for large events and secure the facility for appearances by high-profile visitors. The goal was to replace an outdated model constructed in 1974 and save West Virginia Division of Protective Services' State Capitol police countless hours of planning and preparation by having a "war-room" model of the grounds. The new model would enable security to avoid the task of repeatedly walking the entire campus in preparation for events. 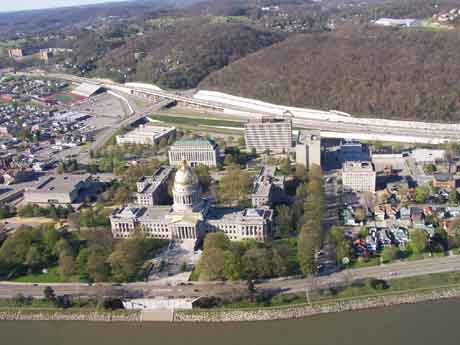 West Virginia's State Capitol police requested a new model of the state capitol campus to replace an outdated model from 1974.

It was Javins and King's intent to build the tabletop model with traditional materials such as foam core, balsa wood, and illustration board. "We were progressing nicely with the virtual model, using various CAD software, when someone mentioned, 'Wouldn't it be great if we had one of those 3D printers we've read about?' We could print, from the virtual files already created, all the major buildings of the capitol campus, saving us hundreds of hours of tedious hand-detail work," said Javins.

King and Javins mentioned the state capitol project to a colleague responsible for approving grants. "I showed her one of the sample Dimension parts, and she got very excited about the prospect of what a machine like this could do," said Javins.

Soon the professors received a grant to purchase a Dimension 3D printer and began using it about a year-and-a-half after they started the project. Initially, they anticipated using the printer to complete the more complicated capitol buildings. "As we got into the process, we found that modeling other minor details was much faster than making them out of balsa or illustration board, and they looked so much better in many cases," said King.

The Dimension 3D printer accelerated the project's progress. The two professors and a small team of students completed the final 4' X 4' model just six months after the printer arrived.

In addition to the capitol campus buildings, the final model contained 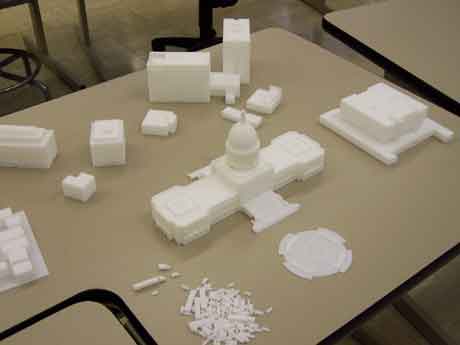 With their Dimension 3D printer, two WVU Tech professors and a team of students created intricate models of capitol buildings.

Capitol police have been using the model for about nine months and have found it to save hours of event preparation. "The campus model is a great resource for security planning," said C.R. "Jay" Smithers, director of the Division of Protective Services. "It saves us significant time and energy when planning for special events and also in evaluating overall security operations."

Last year, the campus had to prepare for a visit by then-presidential candidate Senator Hillary Clinton. Normally, for such a visit, the entire campus and surrounding properties would be walked several times. "We were under challenging time constraints and the new model allowed us to prepare in a fraction of the time normally required," said Smithers. 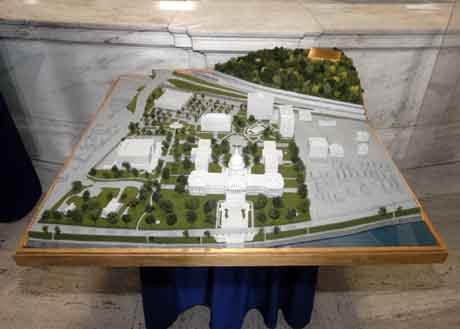 Although original plans involved modeling just the complicated capitol buildings, the process was quick enough to allow time for modeling the minor details such as trees and statues.

In addition to the West Virginia State Capitol project, WVU Tech also used the Dimension 3D printer to help local manufacturers solve production and quality control problems. In particular, WVU Tech printed nearly 50 small parts for NGK Sparkplug in Poca, West Virginia. Prior to incorporating 3D printing into its design process, the company was waiting from one to three months for a machine shop to fabricate plastic parts.

"When I first agreed to help NGK's senior production engineer print a part, he e-mailed the file, I printed it that morning, and dropped it off at his office on my way home," said Javins. Since then, NGK has purchased its own Dimension 3D printer.

Javins and King look forward to incorporating 3D printing across the curriculum in the coming year so more WVU Tech students can become familiar with the technology. "The speed, accuracy, and durability of the models produced with the Dimension 3D Printer is something that can really fuel student excitement for design," said King. "We continue to look for ways to expose more students to a technology that will continue to serve them as they graduate and enter careers in design and engineering."

The campus model is now a popular attraction and is available for public viewing in the State Capitol's Center for Culture and History.