Cadalyst Labs Review: Low-cost 2D/3D CAD software holds promise as an AutoCAD replacement for some, including Mac, Linux, and mobile device users down the road.


When I first heard about a new, low-cost 2D and 3D CAD application that is DWG-compatible and supports LISP, I was pretty excited. ARES Commander Edition from Graebert is all that and more. Could this be a replacement or supplement for AutoCAD in your office — or mine? Let's find out. 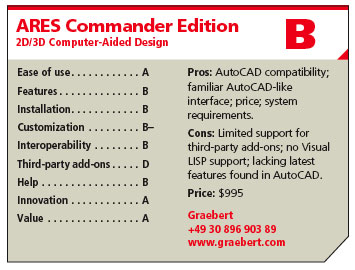 Berlin, Germany–based Graebert (formerly known as GiveMePower) announced ARES at Macworld in February. Macworld, you ask? That's right. The buzz about this brand-new software is partly due to the fact that soon it will be offered for the Mac as well as Linux, and eventually for Microsoft Windows Mobile devices too.

The software is available in two versions: ARES ($495) and ARES Commander Edition ($995), both of which support 13 languages. For this review, I looked at ARES Commander Edition, which offers the complete 2D CAD functionality of ARES (similar in form and function to AutoCAD LT), plus support for ACIS-based 3D solid modeling and for LISP and other custom programming add-ons.

When you launch ARES, it greets you with a familiar interface that includes standard pull-down menus, toolbars, palettes, and a command window. These features remind me very much of AutoCAD a few versions ago, before the ribbon was introduced. If you are accustomed to AutoCAD, you should feel right at home; the only appreciable difference is that the toolbar buttons are slightly larger in ARES. The pulldown menus are thorough without being cluttered with too many submenu fly-outs. The Properties and External References palettes are easy to navigate. The Command line is, well, the Command line. Old-timers like me will appreciate the familiarity of this tool. 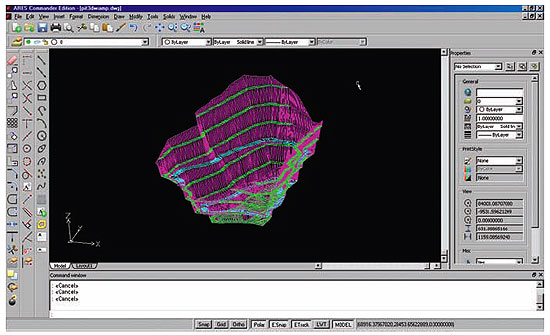 Digging in deeper, I started exploring the Options dialog box. Here you will find large buttons on the left side, as opposed to tabs across the top. Clicking a button reveals a series of tree-view controls for each section. In my opinion, this layout is slightly more cumbersome than what you find in AutoCAD because you must expand a tree to view and change the settings inside. Although the layout is a bit different, most of the configuration options in AutoCAD can be found in ARES, including system options such as autosave and program colors, and user preferences such as mouse options and keyboard shortcuts.

ARES also supports user profiles, which can be exported and imported using a standard XML format. ARES's native file format is DWG, and it supports reading and writing DWG and DXF formats from AutoCAD 2009 all the way back to R12 (circa 1992). An AutoCAD 2010-compatible version is scheduled to ship in May, Graebert reports. ARES also can read and write DWF files, and the Commander Edition can read and write ESRI shape (SHP) files as well.

If your job description includes 2D drafting, ARES won't let you down. Object creation tools such as Line, Pline, Circle, and Arc work exactly like their AutoCAD counterparts. The same can be said for editing tools such as Copy, Mirror, Rotate, and Scale. In fact, I used virtually every tool in the Draw, Modify, and Dimension menus just as I would in AutoCAD and never noticed a difference. There are a few minor command name differences — such as Pattern instead of Array, Split instead of Break, and Note instead of MText — but for every one of
these I discovered, the AutoCAD command name was configured as an alias. For example, if you are in ARES and type the AutoCAD command Join, ARES will run what it calls the Weld command. But only the name is different; the command functionality is exactly the same. 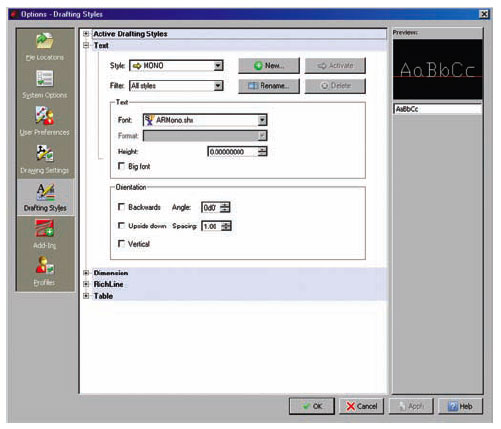 In ARES, drafting styles are set within the Options dialog box.

As you might expect, features such as entity snaps, external references (drawings and images), and object linking and embedding (OLE) support are present, as are the traditional model and layout tabs and the Properties palette. File utilities such as Error Check (Audit), Clean (Purge), and Recover also are available. All these similarities with AutoCAD mean that there is little or no learning curve for AutoCAD users, which is a huge plus. 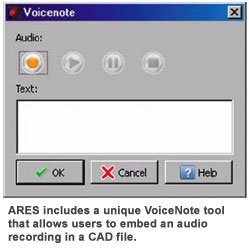 One feature unique to ARES is the ability to insert an audio recording, called a VoiceNote, into a drawing. Using this tool, you can record a comment that becomes embedded into the drawing for later playback.

ARES supports Truecolor, CTB, and STB file formats and prints to any system printer. ARES can also print to SVG, JPEG, PNG, and PDF formats. I printed several drawings to PDF, DWF, and a normal large-format printer, all without any problems.

ARES Commander Edition can create all basic ACIS-based 3D solids, such as boxes, cylinders, spheres, and pyramids. It includes commands for 3D mirror, 3D rotate, and interference checking, as well as the standard editing commands such as Union, Subtract, and Intersect. Here again, the ARES commands look and feel just like they do in AutoCAD. Users can perform 3D object shading as well as full 3D viewing using the ARES Rollview command. If you currently use AutoCAD for 3D solid modeling, you may miss features in ARES such as subobject editing (face, edge, vertex) and freeform design, commands such as PressPull, and tools such as dynamic UCS and the gizmo.

If the intent was to make ARES look and feel like AutoCAD, Graebert has succeeded with flying colors. If you can work in AutoCAD without looking at the Command line or right-click menu, you should be able to do the same in ARES. I am sure that the support for existing command sequences was no accident, because it is vital for supporting existing command macros, scripts, and LISP routines — which leads me to the next topic.

ARES Commander Edition supports a variety of programming interfaces, including LISP, C, Delphi, COM, .NET (C#, VB.NET), C++, and VSTA. What really got my attention here is that ARES offers the LISP functionality of AutoCAD at a price that's closer to that of AutoCAD LT.

I downloaded several LISP routines from Cadalyst's CAD Tips site, and most general routines worked in ARES Commander Edition. However, it is important to note that ARES doesn't support Visual LISP. Visual LISP support has been included with AutoCAD for more than 10 years now, so there is a surprising amount of this code available. If LISP support is important to you, I suggest obtaining a demo copy of ARES Commander Edition and testing your must-have applications. ARES Commander Edition also supports DCL dialog boxes, but the graphics were off slightly in my testing, resulting in the bottom of the dialog box being cut off. The software has no built-in development interface. VBA is not supported, but this is not a surprise given that Microsoft killed this technology a few years back.

Most users want or need to modify menus, toolbars, and other stock features. ARES has its own version of AutoCAD's Customize User Interface (CUI) to facilitate this. The Customize command in ARES opens a single dialog box where you can configure the list of commands, the user interface, mouse actions, keyboard shortcuts, and UI profiles, or "workspaces" in AutoCAD terms. 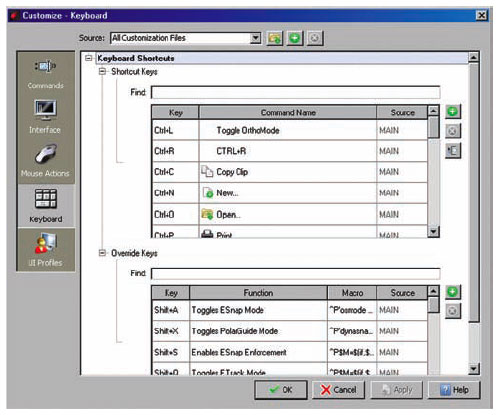 The Customize command in ARES opens a single dialog box where you can configure the list of commands, the user interface, mouse actions, keyboard shortcuts, and UI profiles.

The Customize dialog box opens and closes with no delay, does not feel as sluggish as the AutoCAD CUI, and has a clean and intuitive design for the most part. (The exception is that while editing in the user interface section, it's possible to end up with one scrolling window inside another scrolling window, which can be a bit cumbersome.) I was able to start the Customize command, add a new keyboard shortcut, close the editor, and execute the new shortcut in approximately 30 seconds — all without a practice run. The menu file itself is in XML format, and you can import older menus saved in the MNU and CUI file, although the latest AutoCAD format, CUIX, is not supported.

Rounding out the available customization in ARES Commander Edition, script files, custom linetypes, and hatch patterns are all supported, using the same formats that AutoCAD uses. ARES does not support ARX files compiled for AutoCAD; however, a sofware developer's kit, including documentation, is available for application developers and OEM customers upon request. If you use third-party add-ons with AutoCAD, you should consult the developers of those tools to find out if they will provide support for ARES.

I had some technical issues and questions while installing and reviewing ARES. In most cases, the technical problems were due to personal settings and system set-up that we were able to resolve or work around. I did encounter some licensing issues, some of which were resolved quickly and others that caused delays.

The minimum system requirements for ARES — Windows XP, Pentium 4 processor, and 1 GB of RAM — are such that virtually any PC running today should support it. Of course, Windows 7 and Vista are also supported, in both 32-bit and 64-bit modes. ARES for Apple Mac OS X and Linux are due out in Q2, the company reports, and down the road we should see versions for Microsoft Windows Mobile devices. ARES for Apple iPad and the Google Android operating system are under active evaluation for porting as well. If you are interested in beta testing the Mac or Linux versions, visit the Graebert web site to sign up. (Editor's note: Mac and Linux beta versions are now avaiable for testing.)

ARES has very strong compatibility with AutoCAD, especially in the area of command execution, look, and feel. This software feels like AutoCAD — even more so than any version of IntelliCAD that I have used. If you are looking for a low-cost, easy-to-learn alternative to AutoCAD or AutoCAD LT, and if support for Visual LISP isn't a high priority, I don't think you can go wrong with ARES. If you run a highly customized setup for AutoCAD that relies on Visual LISP and VBA programs, ARES is going to fall short as a replacement for AutoCAD. The lack of support for Visual LISP commands hurts, because there is just no easy workaround. If you're a heavy user of the 3D modeling features found in AutoCAD 2007 or later, you will miss a lot of that functionality in ARES Commander Edition.

For its strong AutoCAD-like 2D drafting capabilities and LISP support, I give ARES Commander Edition an A, but it earns a C as a full-fledged replacement for AutoCAD. In the end, it receives an overall grade of B as an affordable, standalone, entry-level CAD application.

Graebert is on the right track with ARES. Considering the product is brand-new — and considering its upcoming availability for Mac, Linux, and mobile devices — it has a very bright future.