The Utility of 3D

User Profile: As a multi-discipline designer of water treatment plants, Bob Beatty bridges the gap between 2D and 3D every day.


Bob Beatty, a senior CAD designer and CAD manager at American Water Engineering in Mount Laurel, New Jersey, is a man who sees the world in 3D and 2D. To work efficiently on both new and legacy plant designs, Beatty has embraced what he calls "the future of CAD" — without forgetting his roots.

Cadalyst: How did you become involved with CAD?


Beatty: My first job was with Stone & Webster in 1977, where I worked on the design for a nuclear power plant, which was completely done on the drawing board. I learned my first CAD program after I moved to a fire-protection design firm. They had developed their own CAD system, which I helped beta-test. From there, I went back to S&W and was taught three other systems: AutoCAD, MicroStation, and a mainframe system.

I joined American Water in 1996 and have been using AutoCAD and [AutoCAD MEP (mechanical/electrical/plumbing)] ever since. In designing water treatment plants, I use MEP 2012 to its fullest 3D capabilities; I have been told many times by my AutoCAD vendor that I "model to the extreme." 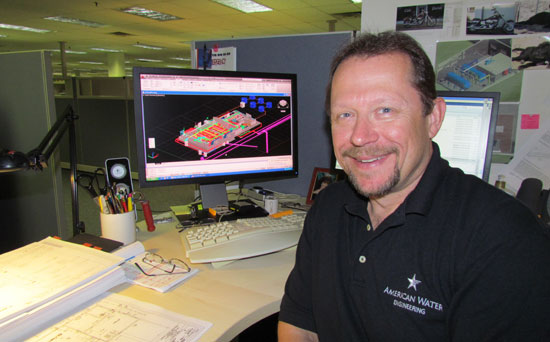 Bob Beatty uses AutoCAD MEP in his work as a senior CAD designer and CAD manager at American Water Engineering.

What motivated your leap to 3D CAD?

When I started to work for American Water, we were a 2D engineering department. We design all aspects of water treatment plants: architectural, structural, process piping, mechanical, electrical. We began to receive literature on [Autodesk] Architectural Desktop, and it just fascinated me. As I collected information on this software, I realized that this is the future of CAD, and I did not want to be left behind. I was getting bored with 2D drawings and saw the 3D world as both a challenge and a way to save time and money on projects. We have been using 3D CAD ever since my company purchased the second edition of the Architectural Desktop software.

The main reason we use a hybrid 2D/3D system is the scope of the work. For designing new plants, we use full 3D. For existing plants that we modify, we usually stick to 2D linework, because implementing 3D on an existing set of 2D CAD files is not very efficient. However, we always look at the project first to determine if there is real value in using the 3D capabilities.

How did you go about teaching yourself to use the software?

When I first started to learn CAD in the late '80s, there was an engineering job shortage. Most employers were trying out new employees on a temporary basis before hiring full-time; you really had to be at the top of your game to stay employed. I had to either learn CAD as quickly as possible or head to the unemployment office. I had a couple of days of one-on-one training, and then it was "go to it" — but go as fast as you can! I would dive into the training manuals and learn as much as I could, as fast as I could. When I needed to perform a certain task, I would research that task and complete it over and over until it was a piece of cake to accomplish.

What have been your greatest obstacles?

The greatest challenge we faced when we transitioned to 3D CAD was building a business case to convince upper management that this was the way to go. We had to show that 3D CAD was not just a glorified CAD system, but that there was great potential to further the design and realize tremendous cost savings by the end of the project — not an easy task, but one that was eventually completed.

The scary part was the software itself. I remember loading the program, looking at all of the tools, and thinking, "I will never learn this software." Plus, the transition to a 3D world was confusing at first. It took some time to learn how to navigate once the model was built. I think CAD users get very comfortable once they learn a particular program and are reluctant to change, just like any other person.

What benefits have you found when working in 3D?

During the design phase, a whole new world has opened up in respect to evaluating the design, both for the engineer and the client. I remember holding a presentation for all of my design engineers following completion of our first 3D plant. I put the model up on the screen, went to one of the 3D views, and turned on the Realistic view — the defining comment was "Wow!"

This software has helped the engineers in ways that they just did not envision. I can now sit down with any of my design engineers, bring up the model, and check all of the process piping to make sure the design is correct. Before that, the engineer would have to go through plans, sections, and elevations to make sure everything was correct and located where it should be. 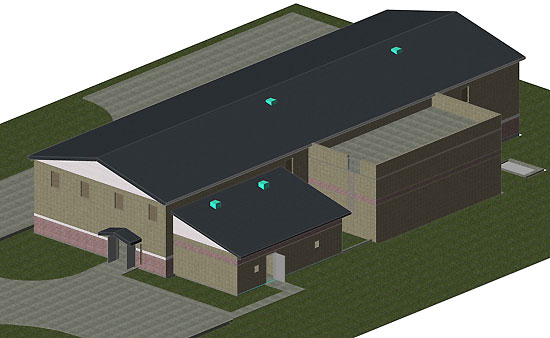 It has also helped us out with our clients. I can now export the model to Autodesk Design Review so that the client can open the file at his or her desk and see exactly what they will be getting. This has especially helped non-engineers who are not accustomed to looking at engineering drawings. As the saying goes, "a picture is worth a thousand words."

At first, the transition to 3D decreased the time needed to create my projects by 50%. Over the last couple of years, those savings have lessened somewhat. As the capabilities of the software have grown, the need for more information has grown as well. Overall, there are still tremendous savings, especially when you need to cut building cross sections. Who can claim they can cut a full section in 30 seconds? With 3D CAD, it takes just a click of the mouse.

In your industry, is it still a 2D world for most?

American Water has operations in more than 30 states, and I work for the corporate engineering office. Most of our engineers and technicians use AutoCAD Map 3D, because of the linear nature of much of our buried infrastructure work. My group is the only one currently using AutoCAD MEP, because of the vertical nature of the treatment plant design work we handle.

I have noticed over the last couple of years that larger engineering firms that work with us have transitioned to some type of 3D CAD software, usually Autodesk Revit or MEP. The smaller firms have yet to transition to a 3D world.

What advice do you have for those who've not yet moved to 3D?

Take your time. Get the proper professional training and embrace the technology. It is completely different from drawing 2D stick lines, but the benefits are worth the time needed to transition to 3D.

I think the biggest reason for firms holding off is the cost associated with the software, training, and new hardware required to accommodate any 3D program — especially in this economy.

Tell us about your life outside work.

I was a volunteer firefighter for 25 years, holding the positions of deputy chief and chairman of the board of fire commissioners for Deptford Township, New Jersey. I have been riding motorcycles since I was 18, and am on my fifth bike, the last two being Harleys. I also scuba dive when I get a chance.

I am married to my lovely wife, Donna, and have a 16-month-old Labrador retriever who tests my patience daily. I keep an open-door policy with my fellow CAD operators — whenever they have problems or questions, I am always willing to help.