Ads help support our ability to provide you all our articles and papers at no cost to you. Thank you for your consideration and support.
Industrial Design

User Profile: Want to play with the cool toys? Zach Burhop demonstrates how you can build them yourself.


Zach Burhop is one industrial designer who never complains about taking work home. In fact, he’s converted two-thirds of his house into a “secret lab” equipped with the software and hardware tools needed to take a design project from idea to prototype. His projects are many and varied, ranging from a 3D-printed windmill to power a porch light to an Arduino-controlled, color-changing LED Christmas tree. But not everything that happens in that secret Las Vegas lab stays secret; Burhop shares many of his projects, techniques, and tips with the design community through his website, videos, and Twitter posts. 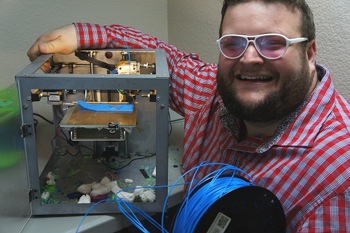 Burhop: I’ve always built things. There’s a lot of cool technology out there that’s either too expensive for most people to access or just not developed enough for production. So I started designing and building out of necessity — it’s the only way I could play with the cool toys. For example, I always wanted to play with robots, so in high school I took on the project of designing and building one. The stuff that can be built on a small budget and used by everyone is always the coolest.

I also put great importance on how designs look; there’s nothing better than building something no one’s seen before. So industrial design was a natural fit, since it’s about making technologies look cool and also making them simple enough so that everyone can use them. Specifically, it allows designs to become mass-produced products.

Tell us about your day job.

I currently work in the space industry, but due to the nature of the industry I cannot disclose anything more than that. In past positions I have worked on teams dealing with rocket-powered pickup trucks, water-powered jetpacks, full-sized radio-controlled battle cars, high-tech pizza-delivery bicycles, and a bunch of other weird projects. I spent my college years climbing around rocket engines and doing propulsion testing at the rocket testing company Orion Propulsion.

Which software do you use?

I am a big [Siemens PLM Software] Solid Edge user. I find that I work more quickly with Solid Edge, but I also use [Dassault Systèmes] SolidWorks on occasion. Solid Edge has Synchronous Technology, which allows me to quickly make design changes to parts without having to go through a history tree, as in SolidWorks. I find that creating technical drawings in Solid Edge is much better. I have more control, especially with its Draw in View feature. I like SolidWorks though — I think it deals with extremely large assemblies a lot better.

I also use Repetier-Host to control my Solidoodle printer and Slic3r to carve up all my STL files. I am a fan of Luxion KeyShot for rendering.

Why do you share your work via social media?

When I started making things as a kid in the late 90s, not many projects were shared online. There were pockets of people building cool stuff, but posting pictures and info about what you were building was a pain in the neck, so most people didn’t bother. But today, social media — or more descriptively, Web 2.0 — has made everything really easy. I can even post project pictures with my phone. It encourages people who normally wouldn’t take the time to share their work to do so, just because the process is so quick now.

The way I like to learn is by looking at what other people have built, and now there are millions of projects out there. But it’s more than just looking at photos and videos; I can download files for 3D printing, for example, tweak them as needed, then upload my versions for others to use.

There are also a lot of open-source projects that many people contribute to, such as the InMoov 3D-printed robot project. Anyone can access those part designs and build their own robot. Web 2.0 enables builders and makers, designers, and engineers to work together more easily.

What kinds of equipment do you have in your secret lab?

I am very interested in 3D printing, and I have a Solidoodle 2 3D printer. It’s probably one of the most economical of the 3D printers, but it has done an amazing job, printing nearly 24/7 for the past two years. I also have a 32” vinyl cutter that is really useful: I use it to make printed circuit boards and custom graphics for my designs, and I can also mount a pen on it to create large templates and designs. I do a lot of electronics work, so I have a collection of Arduino boards, soldering irons, multimeters, etc. My shop has a small CNC metal lathe, a plasma cutter, a MIG welder, and a very small production assembly robot that I haven’t found a use for yet.

I am constantly adding new equipment and capabilities to my design lab. I like to be creative, and the worst thing that can happen is having an idea, but lacking the ability or equipment to bring that idea to life. Every now and then I need a tool that I don’t own, such as a laser cutter; for that I just head over to SYN Shop, which is the local maker club in Las Vegas.