While Windows-based CAD on desktop machines is still the norm, Corel seeks to offer its customers a range of choices — in platforms, devices, and more.


The CAD world is a Windows world, by and large; there are relatively few applications available for Mac users. “There aren’t that many vendors who really care about the Mac community,” said Klaus Vossen, senior product manager for technical graphics products at Corel. CorelCAD is one of those rare applications offered for both platforms, and Corel is also looking to serve more of its Apple-based customer demographic by expanding its mobile CAD offering to iOS.

Providing customers with multiple options — in platforms, devices, or other aspects of the CAD experience — is more than a goal for Corel, it’s part of the company’s identity. The same is true for Graebert, the developer whose ARES CAD engine powers CorelCAD and other applications. When he spoke at Graebert’s Annual Meeting in October, Vossen stressed that point, discussing choice in areas such as the dark user interface (UI) option introduced in CorelCAD 2017: “It’s your choice as a user — you can switch dark to light, and everything in between.”

Giving users those kinds of options is a customer-pleasing approach employed by many CAD developers, but Corel also extends the strategy to a more controversial area: licensing. “We are not forcing anybody into subscription,” said Vossen, noting that the newest release of CorelCAD still allows users to choose from the purchase of new perpetual licenses, maintenance of existing perpetual licenses, and subscription (rental) of the software as desired.

One example is the new Helix tool, which helps users create designs ranging from springs, screws, and bolts to spiral staircases with automated 2D spirals and 3D helixes. Users can choose the desired radius, height, and curvature of a spiral, than can manipulate that shape with the Properties palette. Vossen demonstrated how using the Sweep tool to move a triangle along the path of a helix wrapped around a cylinder quickly creates a bolt. “Creating the path by hand [prior to this release] would have been a rather complex operation, as you would have had to understand some complex math,” said Vossen, but is “very easy now using the Helix tool in CorelCAD 2018 … and much more convenient to do with the tool than with a macro.” 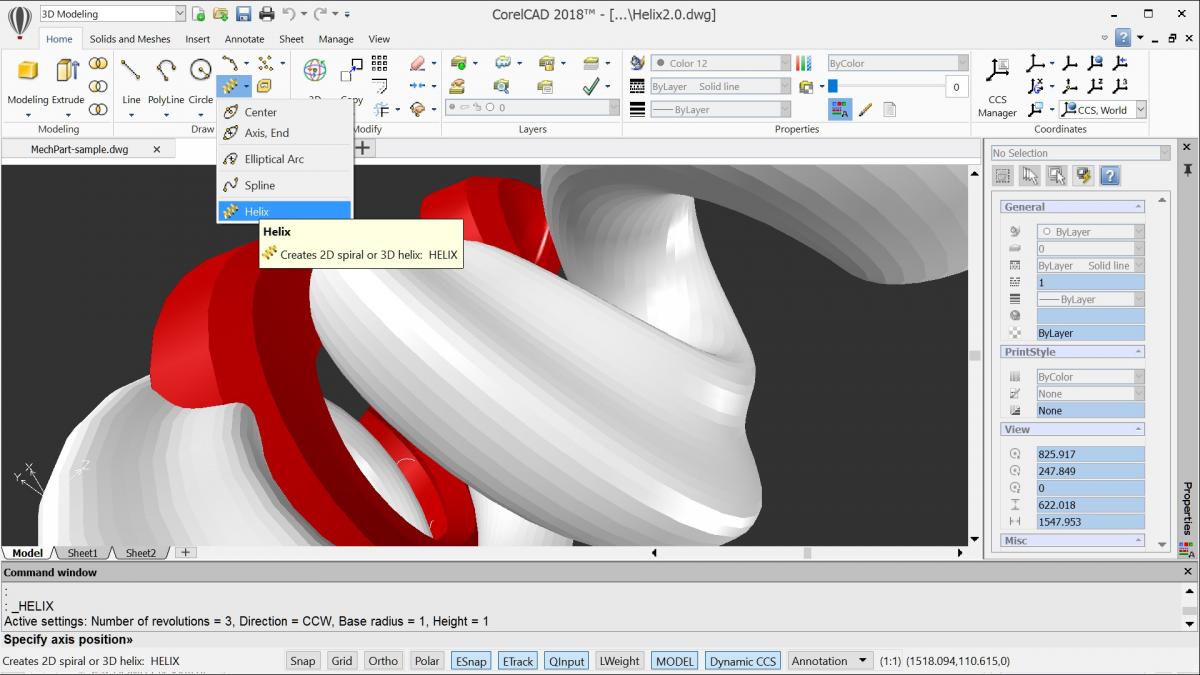 The addition of more 3D capabilities does not mean that Corel has abandoned 2D. Vossen stressed that CorelCAD is still a strong 2D drafting tool, and that users continue to value “the standard feature set that has been the focus of CorelCAD since version 1.”

Although tables are not new in CorelCAD, the software now allows the use of formulas in tables. Vossen cautioned that this capability doesn’t include “the full advanced set of formulas that you would expect in Excel,” but Sum, Average, and Count functions are available, as well as arithmetic operators. Users can also export tables in CSV format, for use in Microsoft Excel or various database applications.

Additional highlights in CorelCAD 2018 include:

In addition to the release of CorelCAD 2018 this month, Corel is also launching a new CorelCAD Mobile app for iOS, and updating the existing Android version. “The goal is to add more choice for CorelCAD users,” Vossen said. Corel’s moves into the mobile arena have already drawn attention from the market; since its introduction in 2016, the Android app has attracted hundreds of thousands of new users, he said.

Vossen stressed that CorelCAD Mobile is “not a pure viewer,” boasting atypical features such as the PictureNote and VoiceNote annotation tools, which attach photographs and audio snippets to the relevant sites in a drawing. “These are very useful features for onsite review and tasks like that,” he explained.

Mobile CAD means different things in different parts of the world. Vossen expects more demand for the iOS version of CorelCAD Mobile in Europe and North America than most other parts of the world, because of the high concentration of Apple product users in those regions. Professionals in those areas are also likely to be using a mobile device in tandem with a desktop workstation; that’s a contrast to users in India, for example, who are more likely to have a tablet or phone as their only CAD device, said Vossen — and therefore will be heavier users of the mobile software. “It’s up to the users how far they want to go with the mobile app,” he commented.

CorelCAD 2018 is available now, at $699 to purchase the full version or $199 to upgrade from a previous version. The new version of CorelCAD will also be the first to be made available through the Mac App Store: subscription prices are $34.99 for one month, or $25 per month on an annual basis.

The full-featured version of CorelCAD Mobile is available free to CorelCAD desktop customers, or as a standalone 30-day trial. After the trial, customers can continue to use the app for free in Simple and View modes. (The number-one complaint the company sees on the Google Play app store, Vossen observed, is that customers want a mobile CAD app, but they don't want to pay as much as they would for a desktop CAD license.) Finally, the iOS CorelCAD Mobile app for iPad and iPhone will become available in the next few weeks — “very soon,” Vossen predicted.