With AutoCAD, Autodesk has long enjoyed the lion’s share of the 2D CAD market, but it is far from the only option available: Numerous companies develop competing CAD applications that support the DWG file format. Many of these competitors, which offer varying levels of capabilities, have promoted themselves as lower-cost alternatives to AutoCAD. Ever since Autodesk began its transition to a subscription-only licensing model, however, these applications have been drawing new attention from professionals for whom licensing flexibility, not price, is the primary concern.

The Belgium-based company Bricsys, developer of BricsCAD, has experienced this firsthand. “We received over the past weeks, tons of e-mails from large companies saying they are fed up [with Autodesk],” said Mark Van Den Bergh, COO of Bricsys, at a media event held at the end of April. Although Bricsys offers rental licenses, the vast majority of its business — perhaps 95% — is in perpetual licenses, according to CEO Erik De Keyser.

The BricsCAD name may be unfamiliar to many who use CAD software; Bricsys has maintained a tight grip on spending over its 15-year life, limiting expenses such as marketing. “We force ourselves to be profitable, and then you have to be lean,” said De Keyser. Now, the company has established “substantially different technology” than its competitors, De Keyser believes, and is ready to make itself known to a broader audience, without fear of being written off as an AutoCAD clone.

“We are starting what I would call a second life now,” said De Keyser, who expects the workforce of fewer than 150 people to reach 300 or 400 in the next 3 to 4 years. He is determined to keep his company lean, however, with sales shouldered by an 80-country network of resellers and a heavy emphasis on development staff. Although Bricsys may need to slightly reduce its investment in R&D — which currently accounts for 40-45% of spending — during this time of growth, the company’s priorities won’t change. “I think we will stay about 80% developers,” De Keyser predicted. “What we are good in is basic research and development — that’s the focus.”

Bricsys is a small company with limited resources, but it wants to meet a wide range of customer needs, so its strategy includes sharing the burden of development with third parties. Today, there are more than 1,200 applications running on the BricsCAD platform, ranging from mechanical design to facilities management to survey and mapping (this number includes applications available to the public and those developed for private use).

Last month, the Intergraph CADWorx plant design suite joined the list of supported applications — the culmination of a joint porting effort that began in 2015. (Intergraph’s GT STRUDL structural analysis and design modeling software also is available on BricsCAD.) “Intergraph for us is a very substantial step,” said De Keyser, who takes it as validation of the extensive work the company has put into rewriting its application programming interfaces (APIs) to foster outside development. “We expect the Intergraph deal will have an impact on our growth as well.”

Luc De Bastselier, Bricsys CTO, explained that porting CADWorx to BricsCAD involved moving 3.5 million lines of code and testing more than 400 commands. For users to have a good experience working on the BricsCAD platform, the developers had to maintain the same workflows and performance level that CADWorx had delivered when running on AutoCAD. “That’s important because the typical plant models can be quite huge,” De Bastselier noted. 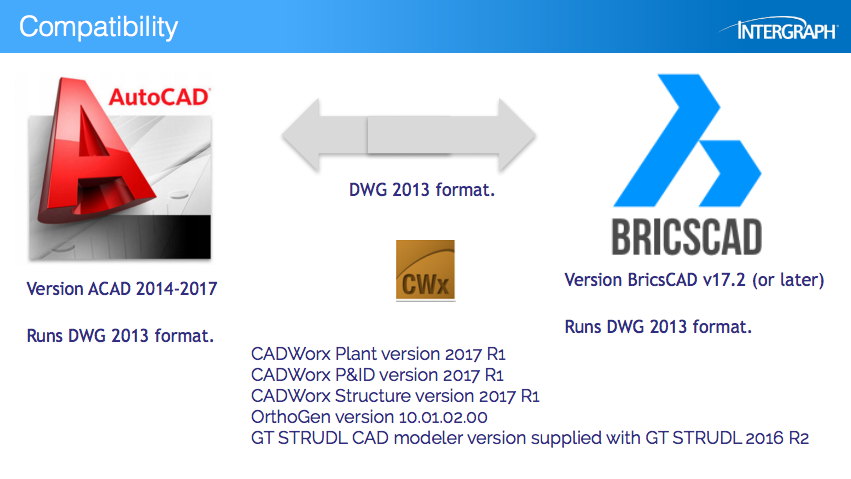 “For users, I can say there is no difference … 95% of the cad functionality is exactly the same,” said Peter van der Weijde, vice-president of CADWorx and Analysis Europe and Africa, regarding the BricsCAD port of CADWorx vs. the AutoCAD version.

Bricsys is careful to avoid effort duplication — it doesn’t make sense to develop another HVAC package, for example, when there are already packages available that are tailored to local markets, De Keyser explained. “The last thing we want to do is destroy the diversity of the application market,” he said. “We want to support [the ecosystem of third-party developers], help them.”

Rather than attempting to tackle multiple application markets in a scattershot approach, Bricsys focuses its development efforts on the cases where a viable third-party application does not exist, or the project is simply too big for the (typically very small) third-party development companies to tackle. These in-house efforts have yielded the BricsCAD BIM and BricsCAD Sheet Metal modules, which are add-ons for BricsCAD Platinum. “BIM — that’s something we are doing ourselves, and that’s a huge market,” De Keyser observed. “If we hadn’t developed it, we would have lost the AEC space. … The goal is to bring [over] the 5 to 6 million people who are in the DWG space and want to move to BIM.”

These continued expansions of capabilities enable BricsCAD to develop independently, as opposed to following Autodesk’s development path, as some AutoCAD alternatives to. “If the DWG community wants to move on … we can give people perspective beyond AutoCAD,” said De Keyser. “BricsCAD is the only product that goes in that direction.”

Another essential element of Bricsys’s low-overhead approach to business is the automation of routine processes. Four Bricsys employees are devoted full-time to the Bricsys Online Administration (BOA) application — the backbone of the company’s organization. “It’s really the genes of the company and it’s really central in everything we do,” explained Van Den Bergh. BOA provides both a customer-facing and a back-end interface for the company’s daily activities, powering the customer support system, license management, reseller interactions and outreach efforts, and online sales. “The indirect sales model really suits us, but it doesn’t mean we don’t have a connection with our clients,” Van Den Bergh noted.

Customers can manage their licenses and support requests through BOA; resellers can prepare e-mails to customers or draft press releases; and Bricsys employees can collaborate with resellers or coordinate a translated explanation for a support issue (the support system is available in all the languages the software is available in). “You have to organize yourself to make sure you can give proper support,” Van Den Bergh commented. All BricsCAD customers have access to support “from Day 1, even if you are just a student trying it out,” he noted. “We are very, very keen on support,” affirmed De Keyser. “Why? Because others probably don’t do it enough, and that’s an area where we can make a difference.”

For the most part, Bricsys has chosen organic, autonomous growth over the fuel injection of outside investment. “It fits our DNA, it fits our company,” De Keyser believes. However, the company has begun working with an investment partner, while retaining majority ownership. The partner is “satisfied” with the company’s rate of growth, said De Keyser, which consistently hovers around 25%, he reported. And regardless of the funding sources, he is committed to keeping overhead down and staying profitable and “lean” — “it makes our company so scalable,” he observed.

Another thing that will not change is the company’s commitment to offering perpetual licenses, De Keyser affirmed. “Read my lips: We are committed to choice.”