Earlier this week, Corel introduced CorelCAD 2017 — the sixth version of its 2D/3D CAD application for architects, engineers, and designers. CorelCAD is fully DWG-compatible, and uses the format natively for opening and saving files. It also supports DXF, DWF, and PDF, as well as STL output for 3D printing.

CorelCAD is built on Graebert’s ARES CAD engine, and unlike most offerings in the CAD marketplace, is available for both Windows and macOS. Rather than choose between one or the other, however, users can access both platforms through a single license. This “hybrid license” can be installed on up to three devices, in any combination of Windows and macOS.

CorelCAD licenses are perpetual; there is no subscription option at this time, although the company is looking into that possibility. According to Klaus Vossen, senior product manager for technical graphics at Corel, the relatively low price of the product ($699 for the full version and $199 for the upgrade) makes upfront purchase more easily achievable — even by the smaller companies that make up the bulk of CorelCAD’s market — and renders a low-cost subscription plan unnecessary. “CorelCAD is an affordable CAD solution that provides a lot of features in the 2D drafting and 3D CAD area,” he commented.

“We see Corel customers as not being ready or not willing to move to subscription, and we don’t want to force our customers,” Vossen continued. “We do see increasing interest from customers asking for the perpetual license option [in the wake of Autodesk’s decision to stop selling perpetual licenses],” he observed.

Each purchase of CorelCAD 2017 also includes a 1-year license to CorelCAD Mobile for Android, which has garnered about 25,000 users since it was launched in August on Google Play, Vossen reported. Although he noted that a phone is “probably not the right device for creating CAD designs,” CorelCAD Mobile users can perform full 2D editing, in addition to viewing and annotation, on their Android tablets and smartphones. “It’s perfect as an on-site companion app,” Vossen noted.

For users who need to create technical illustrations, CorelCAD supports the CDR and DES file formats, so it can be used with CorelDRAW and Corel DESIGNER for a complete technical graphics workflow. Users can import graphics — including multipage files — from CorelDRAW, convert them into 3D models in CorelCAD, then integrate them into technical documentation or presentations they create with Corel DESIGNER. (The two graphics programs are available for Windows only.)

This connection is “one unique feature that you don’t find in any other CAD product,” Vossen noted. “It provides … a complete workflow in a streamlined and straightforward way.”

For this release, Corel focused on features that can speed up and simplify the creation of 2D and 3D designs. “It’s really about productivity in the typical CAD workflows,” said Vossen.

New tools and capabilities include: 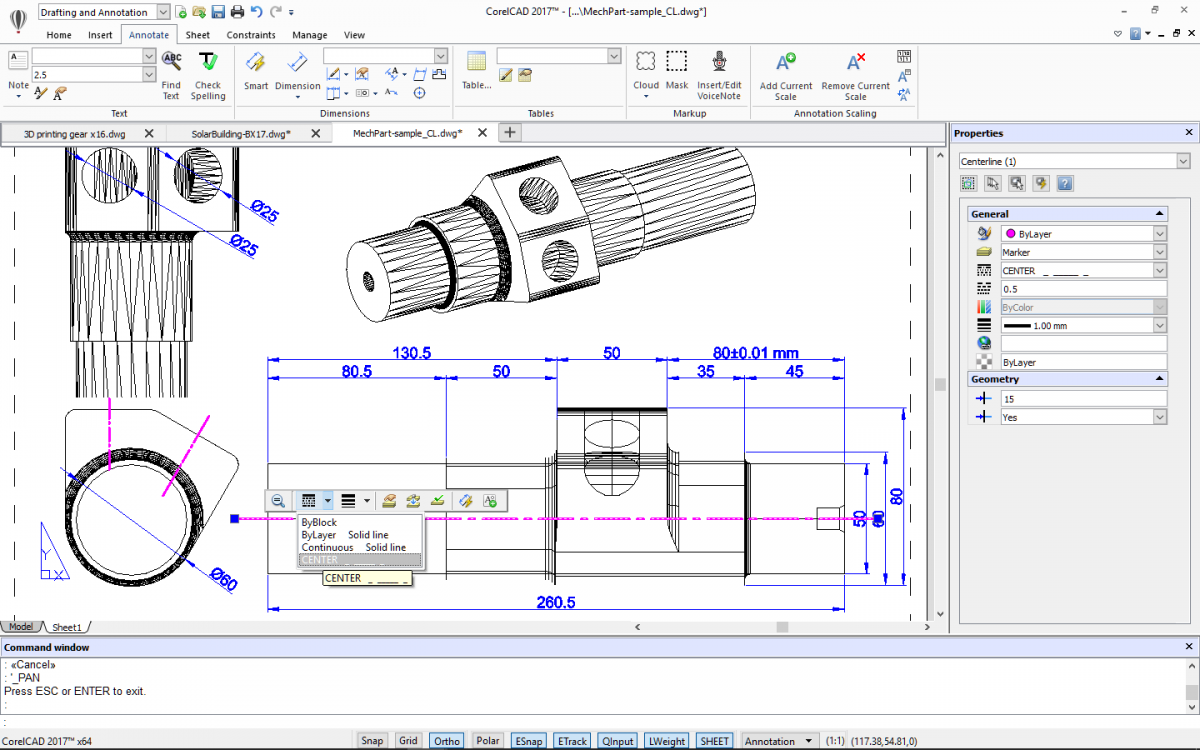 CorelCAD 2017 is on sale now for Windows and macOS in English and 13 other language options; 64-bit and 32-bit versions are available. CorelCAD Mobile is included as a free, full-featured 1-year license for CorelCAD 2017 customers, and is available through Google Play.