Ads help support our ability to provide you all our articles and papers at no cost to you. Thank you for your consideration and support.
Sponsored Content
3D Modeling

Sponsored: When Arup was retained to design Cherrywood Grand Parade Bridge as a sustainable transport system, 3D modeling and a connected data environment enabled the project to be delivered by a much smaller team.


Cherrywood Grand Parade Bridge is part of a new town center development in Dublin, Ireland that includes a combination of residential, retail, parks, and office space, making this developing suburb an important residential and employment settlement to the south of Ireland’s capital city. The bridge will tie into an existing light rail bridge and will include two bicycle paths and a pedestrian walkway. The design also needed to provide a connection within the town center on either side of Wyattville Link Road and seamlessly integrate with the urban environment by incorporating trees and soft landscaped elements for shelter and visual amenities. The structure has two spans, each one measuring 22.5 meters in length, consisting of composite steel girders with an in-situ reinforced concrete deck slab, varying in width for 13.4 meters to 16.4 meters. It is a complicated project, as the scope of the work includes constructing the spine road network, including Grand Parade Road, and extending the viaduct for the light rail system. 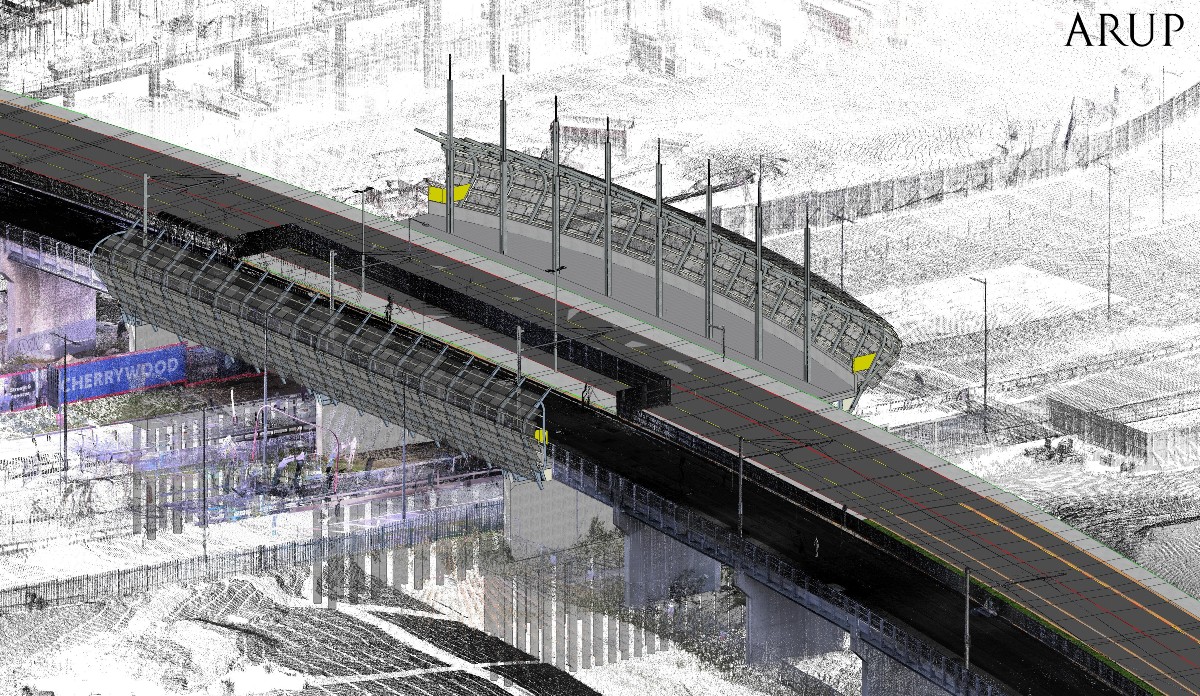 Hines, the main developer on the project, appointed Arup to undertake the design of the Grand Parade Bridge over Wyattville Link Road. They realized that they needed to optimize constructability and coordination among third parties, and that traditional 2D drawings were not going to achieve their goals. Therefore, Arup chose 3D modeling delivery, as they determined it to be the best solution to mitigate errors during construction and tender cost evaluation. However, choosing to fully model in 3D presented numerous challenges for the design team, including a software learning curve, which was compounded by complex road geometry and bridge interfaces amid a tight timeline.

Arup selected Bentley’s OpenBridge and ProStructures to provide the flexibility to detail all project elements, including foundations, abutments and piers, substructure, steel beam composite with concrete deck, and the façade superstructure. The applications helped them perform accurate 3D bridge modeling and detailing for the entire project. OpenBridge Modeler helped to fast-track parametric bridge geometry modeling and offset the additional time needed to expand Arup’s skillset. The support from Bentley’s product team to upskill the design team in ProConcrete and ProSteel improved the efficiency of delivering 3D models of reinforcement and steelwork, as well as of producing 2D drawings. The bridge geometry was easy to manipulate in OpenBridge during the coordination process between Arup, the architect, and outside consultants.

Having used ProjectWise on other projects, Arup was comfortable switching to that platform. They used the platform as a single database for design data, which proved to be the best choice to implement the standard schemes. iTwin Services were used to deliver review sessions of both the stand-alone bridge model and the coordinated version, which had all stakeholders’ reference models embedded. The iTwin Design Review web-based platform allowed for remote review, commenting, and measurement on items that required additional confirmation and designer response.

Arup ensured full integrity of project data through the collaborative connected data environment, using ProjectWise, for the multidiscipline design team. Bentley’s connected data environment established a robust platform for project control of all multidiscipline digital content, drawings, reports, and information exchanged from outside consultants and architects. The flexibility of ProjectWise enabled them to easily access project coordination models during internal design team technical meetings and external meetings with the client or third parties.

LumenRT enabled Arup to develop high-resolution images and videos (in both 2D and 3D), as well as virtual reality models that allowed the client and stakeholders to provide feedback throughout the design process. The process increased client satisfaction, enhanced the approval process, and delivered a high-quality, accurate representation of the new bridge.

“The Bentley Systems workflow streamlined the design process for the Cherrywood Grand Parade Bridge, enhancing communication and productivity for the team,” said Pawel Ogonowski, senior bridges engineer/project manager at Arup. “The intelligent parametric modeling and seamless link between OpenBridge, OpenRoads, and ProStructures enabled this project to be delivered according to a tight program. With ProjectWise in place and using iTwin Design Review, the project was shared and collaborated on by stakeholders in a controlled manner. The outcome presented via high-resolution images, videos, and virtual reality—rendered in LumenRT—provided added value to the client.”

By using ProjectWise, Arup streamlined workflows and improved the quality and efficiency of the project team. The intelligent and interactive use of the digital workflows involving OpenRoads, OpenBridge, and ProStructures enabled them to reduce risks and mitigate errors. Moreover, the data collaboration, communication, and management processes allowed them to deliver the project within the agreed budget and timeline.

Using the workflows in Bentley software provided multiple benefits on this project, covering all stages of the tender and detail design process. Using OpenBridge shortened the modeling process by half, compared to using alternative solutions, and improved ROI in the design by roughly 25%.

The level of detail achieved in the 3D models and integration with visualization software enabled stakeholders to provide feedback on an accurate depiction of the bridge design. The changes made as a result of this feedback helped to ensure that the bridge design met the needs of the community, including providing accessible and safe pedestrian and bicycle paths, and linking with the sustainable transport network in Dublin.

About the Author: Meg Davis