The design software developer is pushing generative design and other automation technologies for product development and AEC workflows, while seeking to allay concerns about the impact on jobs.


Autodesk held its flagship Autodesk University user conference this week in Las Vegas, and used this year’s event to promote the value of automation in design processes. “Automation is changing the very things we’re capable of making, and how we make them: The things we make perform better, last longer, and are more meaningful,” said Autodesk president and CEO Andrew Anagnost. In addition to better designs, the potential benefits of automation extend all the way into product creation, determining the best manufacturing methods and materials and supporting just-in-time manufacturing.

And those “things” Anagnost referred to are not limited to products, but include all types of AEC projects as well: “Tomorrow, automation is going to allow us to explore dozens of design options really early in the design process and share the ones that best meet the requirements with all the disciplines — the disciplines most of us consider downstream today.”

Automation can not only provide real-time feedback on the constructability, cost, reliability, and risk of designs long before anything is built, but also eliminate redundant data entry and the introduction of human error, Anagnost believes. “Automation will capture every change, and communicate it to everyone, instantly,” he enthused.

The Fallout of Technological Upheaval

Automation is undoubtedly a force that has begun changing the way designers and engineers work — and whenever a revolution in technology promises to make a particular role, task, or process more efficient, the affected employees begin to worry that they’ll be made redundant. But rather than threatening the livelihoods of these professionals, automation is instead reducing drudgery and reshaping jobs for the better, Anagnost assured the audience. “[It’s giving us] the opportunity of better: the opportunity to make things better, and do better work,” he said. “Automating our repetitive tasks doesn’t make the other tasks we do redundant — it makes them more important. It increases the importance of our expertise and our creativity.”

That said, Anagnost acknowledged that the transition calls for a new mindset, and will require workers to adopt new skills. “We all need to accept that the old is going away, and … the new has not fully emerged — from your factories, from your supply chains.” The skill sets needed, he explained, will include adaptability, resiliency, and community. “[We are entering] an era where there’s going to be a scarcity of skills, not a scarcity of jobs,” he insisted. 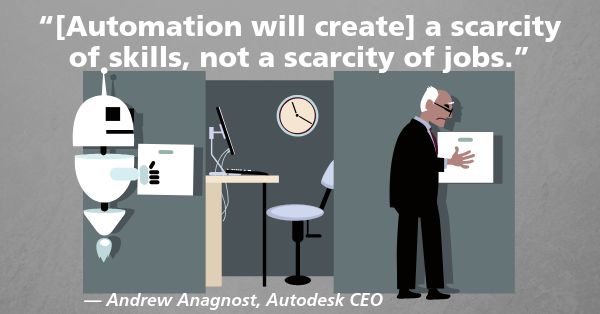 The concept of “community” as a skill includes interacting with a network of users and providers for expertise, support, and training. Making training an ongoing priority rather than an occasional event is essential, Anagnost stressed. To that end, “Autodesk University is becoming a continuous digital experience,” he explained, and the company is transitioning from providing product-based certifications to role-based certifications. Autodesk has begun making credential courses available through online training provider Coursera; the five-part “CAD and Digital Manufacturing Specialization” is available now, with more to follow.

Naturally, not all positions or industries are equally affected by a technological shift. “One of the things we recognized very early on is the trades are particularly vulnerable to automation, so we’ve begun investing in some programs to help with that,” said Anagnost, including partnering with some U.S. labor unions to help prepare workers for the changes wrought by automation.

Greg Fallon, vice-president of design and manufacturing strategy at Autodesk, explained that automation should be part of an integrated group of organizational efforts: “When you put data at the center of your processes, and connect it to the right people, at the right time, you break down the silos in the design process … once the people and processes are connected, you can automate the processes themselves. Generative design, for example, automates the ideation process.”

Autodesk is making a variety of improvements to its software tools to better support automation. Currently, the company is working to expand the manufacturing constraints for Autodesk generative design technology (which is available in Autodesk Fusion 360) beyond 3- and 5-axis milling to include 2- and 2.5-axis machining, according to Fallon.

In addition, “We’ve developed a comprehensive design-to-print workflow for additive manufacturing, based on Autodesk Netfabb and Fusion 360, that connects Autodesk generative design technology with HP Multi Jet Fusion 3D printers,” Fallon reported in a post to Autodesk’s ADSK News blog. “By streamlining the conversion of digital design to physical part, the new workflow will increase accessibility to rapid prototyping while accelerating our customers’ ability to deliver production-ready 3D printed parts.”

These development efforts extend to Autodesk Forge, which Anagnost described as “the open development platform that lets you build your own automation on the products you’ve built your business around.” Autodesk CTO Scott Bourdin commented, “Today, we’re getting to the point where the cloud platform that we’ve been building is becoming highly customizable, highly flexible, and highly automatable.”

Brian Roepke, head of product management and experience design for the Autodesk Cloud Platform Group, reported that a new public beta, Design Automation API for Inventor, is available on the Forge platform. According to Roepke, it will enable participants to write scripts and add-ins that automate tasks for AutoCAD, as well as Inventor in the cloud. Another project, Design Automation for Revit, is expected to have a public beta by the end of January.