According to Merriam-Webster, one definition of the word frustum is “the part of a solid intersected between two usually parallel planes.” As a company, however, Frustum also has its roots in frustration: CEO Jesse Blankenship became dissatisfied with the available software options back when he was a graduate student. He saw a Frustum as “a potential volume to carve into and sculpt complexity,” similar to a block of marble. “I wanted to design things I couldn’t [create] with standard CAD tools,” he said. “There were limited options out there, but for the time-crunched designer, they were just incredibly hard to use. The designer had to be very determined.”

Blankenship believes that the optimization solutions on the market today are still too time-consuming, or intimidating to anyone who’s not a stress analyst. “I noticed a need in the market for a real generative design suite for mechanical engineers … we’re very focused on making technology that’s easier to use than the other options out there.”

Next month, Frustum will release Generate, a software platform “where design and optimization intersect,” as the company puts it. Generate provides topology optimization — determining the most efficient material layout that meets a particular set of stresses — for designers working with a variety of tools. “You can use any CAD platform that can export STEP files,” explained Blankenship.

After users import their STEP files into Generate and select faces of the model to apply loads to, they can iterate and run multiple simulations simultaneously. In the past, Blankenship noted, a designer might have had to wait several hours or overnight to see the results from one optimization, before starting another and beginning a new waiting period. With Generate, in contrast, the designer can evaluate 10, 20, or more optimizations at once, because all processing takes place in the cloud. “This takes the design cycle down from a month to a few days or a week,” explained Blankenship.

“The promise of the cloud is that you should have instantaneous results, and we’re trying to align with that as much as possible,” he continued. Frustum uses Amazon Web Services (AWS) as its cloud platform, and all data is encrypted. “It’s a secure platform if used correctly,” Blankenship asserted.

Having massive computation resources at hand also means that Generate can perform “mass optimization for mass customization.” For example, rather than a designer having to manually create the thousands of architectural details for a curtain wall that changes shape as it encircles a soccer stadium, he or she can simply set up a Generate workflow simply utilize the Generate Enterprise API. “It will tailor to your workflow, design the subcomponents automatically, and the design will be catalogued and ready to go to manufacturing,” Blankenship said. “This will really enable designers to do something they could not do before.”

Starting with the End in Mind

Unlike tools in the market that yield “inspirational” models with “rugged, jagged geometry,” Generate returns “actual usable geometry,” said Blankenship. Rather than concept generation or investigation, Generate is focused on manufacturability, through either additive or traditional methods. “Generate is very much intended to be a platform with multiple generative design technologies in it, which a designer can deploy as needed.”

It’s especially well suited to 3D printing, according to Frustum, which states: “Generate seamlessly grows material between the given design features to make optimally stiff and lightweight structures for loading cases. The smooth and blended surfaces reduce weight and minimize stress concentrations, thus enabling designs to be ready for additive manufacturing without the need to manually redesign.”

Blankenship pointed out that additive manufacturing is also very well suited to the complexity of designs produced with Generate: “You get a tremendous amount of complexity for free; there’s no penalty for making a block of material [versus] something more complex.” 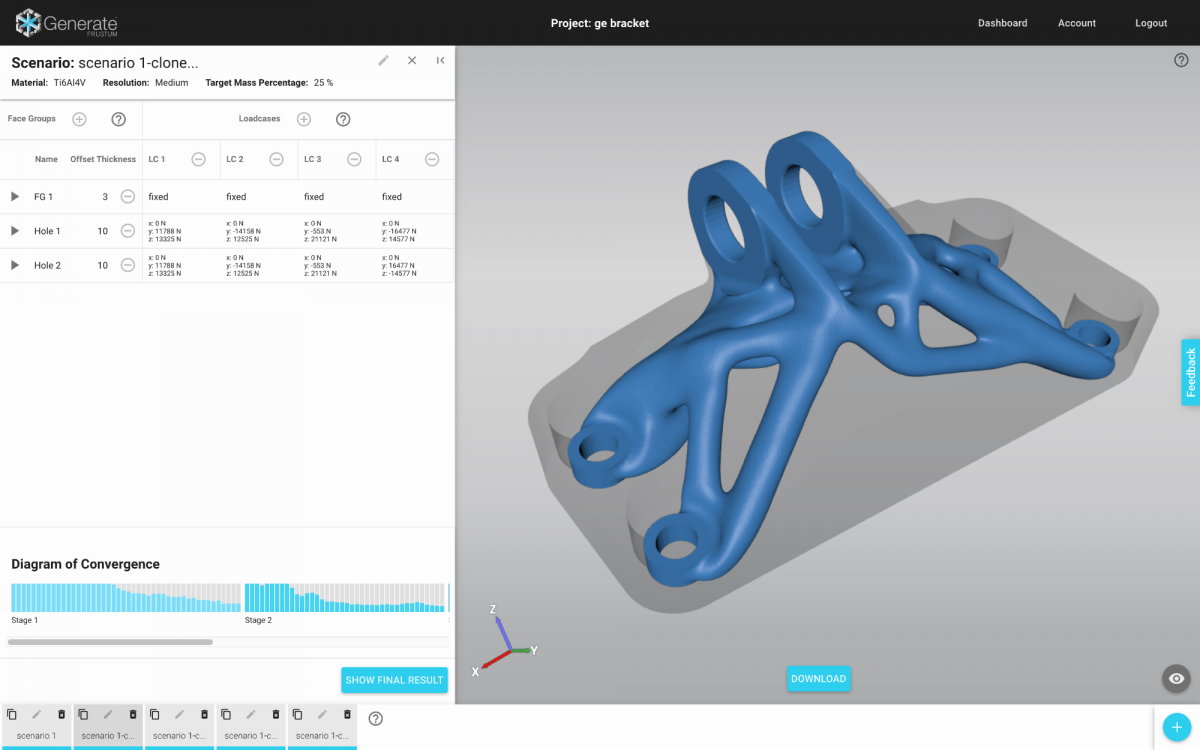 Optimized models produced by Generate can be manufactured by various methods, but are especially well suited to 3D printing technologies, which readily accommodate even the most complex designs. Image courtesy of Frustum.

Ultimately, Generate will be offered in three versions: Free, Pro, and Enterprise. Frustum has made its beta public, so anyone can now register to join the Generate Pro beta program, which has been under way with a select group of users for about three months.

Frustum plans to make the Pro version commercially available in July; Generate Free will launch at the same time. The company won’t release pricing information until that time, but the costs will be modest enough that single users and small design shops won’t be left out. “We’re very sensitive to it being a mainstream product,” Blankenship said.

Users will pay a flat monthly fee for Generate Pro, and can also buy credits to spend on any usage that exceeds their monthly cap. Rather than fee structures that charge based on compute time, however, the costs will be tied to model complexity, Blankenship explained.

The company is currently seeking a few early commercial customers for Generate Enterprise, which unlike the other versions, will be integrated into each customer’s workflows via the Generate application programming interface (API). Frustum has its eye on enterprise candidates in a variety of industries. “Architecture is a good example, but we’re very interested in other applications as well,” including aerospace and automotive, said Blankenship. “[Generate] lends itself to large-scale structures very well.”

The Future for Frustum

Another project in the works is collaboration with Siemens, a Frustum shareholder, which will enable NX users to perform optimizations directly within product assemblies with the Frustum core technology. An availability date for that integration has not been released yet.

Also on the horizon is support for smartphones and tablets. Because the computation is carried out in the cloud, Generate doesn’t require that the user have powerful hardware; currently it can be used on a “normal laptop,” Blankenship noted. “We want you to be able to use this on a mobile device,” he continued. “That’s definitely in our pipeline.”