One student's foray into modeling with Autodesk Mudbox and 3D printing shows how inspiring it can be to take an idea from drawing to reality.


From a fairly young age, I knew I'd be pursuing the arts, and when I entered John Paul II Catholic Secondary School, it was with creative pursuits in mind. I never thought that my artistic path would lead to a technological design class. But during my tenth-grade year, that’s exactly what happened.

When I arrived in my Technological Design class the first day, it was not what I was expecting. Using numerous software programs for creative work was a far cry from using my typical, traditional tools such as a pencil and paintbrush. Our tools included Autodesk Mudbox for digital painting and sculpting and Autodesk SketchBook Designer illustration software. It took me a few days and a couple different approaches to get comfortable using these programs, but once I did, it felt natural to come in every day and log into the computer.

It was only the second assignment in the course when our teacher, Michael Santolupo, asked us to take a gargoyle design from concept to physical model using our software and a 3D printer. We were asked to sculpt, texture, and paint in a digital environment — not a realm that I was familiar with. However, the digital sculpting design software enabled my ideas to take shape. Like many of my fellow classmates, I tackled the task with my creativity at hand.

Most people think gargoyles to be noble protectors of churches and cathedrals, but in fact, there is more to the story. The gargoyle originated in the seventh century as a monster that the French bishop St. Romanus defended his country from. Its name was Goji, or Gargouille, and it was said to look so horrific that it scared away demons and other evil spirits. Its fearsome appearance made people consider it an effective talisman against evil, and for our project, we used this original version of the gargoyle as our inspiration.

Entering the World of Digital Design

Our first task was to get a feel for our idea of a gargoyle by roughly sketching our ideas on paper or in SketchBook Designer. I chose a pencil-and-paper approach for practicality, as a separate, nontechnical part of the course required a sketch as well. After we were satisfied with our initial concept, we moved into Mudbox. I used my sketch as a reference; some of my classmates imported their scanned sketches directly into Mudbox.

To interact with Mudbox, some students used pen tablets, some used a Cintiq interactive pen display, and others used a mouse. The first time I tried Mudbox was using a pen tablet, and I nearly immediately decided I didn't like it. When I returned to my normal workstation with a proper mouse the next day, however, I promptly fell in love. 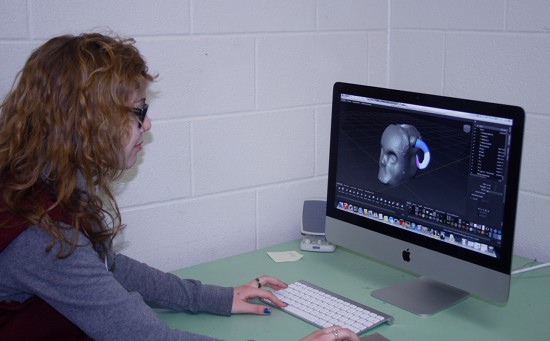 For many of the students in Mike Santolupo's class, the gargoyle project was their first encounter with digital design tools.


The program utilizes numerous levels of different amounts of polygons, which are manipulated with preset and imported textures to create the desired look. A Mudbox model is basically a collection of small squares you can move around and resize to shape your idea. Mudbox mimics clay sculpting, and I must say, for an automated program, it does a fairly good job once you learn how to use it. The program allows you to start off with variously shaped meshes, including a sphere, a bust, and a plane. I chose a bust to work off, but one of my classmates started with a sphere instead.

After choosing a base, we used various sculpting options to manipulate the “clay” according to our wishes. With the basic tool, you can change the size and strength to suit your needs. You can zoom in and out of flowing views of your 3D object. The five tools and options I found most useful were Invert, which inverts most of the preset and imported textures; Smooth; Symmetry; Bulge; and Grab. Most of the tools do pretty much what their titles tell the user they do. If you are unclear, though, you can hover over the tool for a description or simply try it to see how it manipulates the virtual clay (and Undo if needed). You also can change the Level setting, which specifies varying degrees of detail using varying amounts of polygons.

Once you have your detailed sculpture, you can texture it further with stippling, scaling, or any designs you wish. I used only preset textures for this step, but you also can import an image to use as a texture.

Our final step was painting, in which colors or images can be applied to the model. I believe this was the simplest step in my process, but it is not to be mistaken for the least creative. It was easy, but the color scheme options were endless.

About the Author: Jade Nuber