The 100% cloud-based CAD software had 10,000 users during testing, with more than half of sessions conducted via mobile device.


Onshape, the company launched by former SolidWorks executives that is "100% focused on cloud and mobile CAD," announced this week that its flagship software is moving from beta testing to full commercial release. The company also launched the private beta version of the Onshape App Store.

In the nine months since the launch of beta testing, the software had 10,000 users performing 400,000 hours of work and exporting 390,000 CAD files, the company reported. Jon Hirschtick, Onshape founder and chairman of the board, told a group of media representatives last week that the cloud-based service delivered 99.9% uptime — "there was no disruption of work" — primarily because the platform exists across several servers, so if one server crashes, the system doesn't crash. "Because of our unique [framework], we've had virtually zero crashes and lost work," he said. Customers are using the software to develop consumer electronics, medical devices, sporting goods, and much more. Onshape customer stories are available on the company's web site. 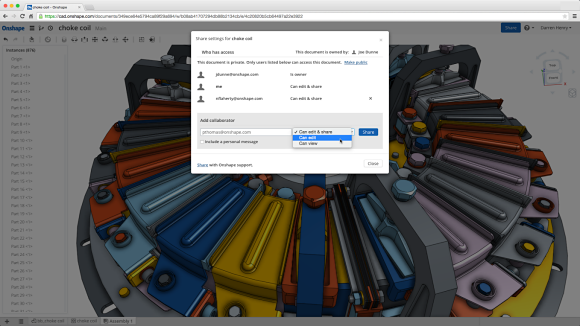 Onshape supports full CAD editing and version control on mobile phones and tablets. Hirschtick reported that 54% of Onshape Professional use is via mobile device, with one in six sessions being conducted via phone or tablet — although he didn't break down actual phone use of the software. "They're using phone and tablets for serious CAD work at a rate that we think confirms our vision," he said.

Onshape is available free for makers and students, and in professional ($100 per user/month) and enterprise versions.

Being released in private beta for selected users, the new Onshape App Store is an open marketplace offering a variety of software that extends the functionality of Onshape.

Onshape supports three styles of application integration via its API:

Joe Dunne, Onshape partner manager, said, "We have something that's never happened before: Your app will follow you wherever you go."