Scanning, Photogrammetry, and a UAV

The basis of Autodesk’s proposal was to go all in with reality capture — the process of gathering real-world data via photography and laser scanning — to create accurate, high-resolution, 3D as-built models of the Chapel for use in advanced analysis solutions. The tools chosen for the mission included two laser scanners — a Leica Geosystems ScanStation C10 and a FARO Focus3D X 330 — and a DJI Phantom II unmanned aerial vehicle (UAV) equipped with a GoPro Hero 3 Black camera. The C10 was used primarily to capture longer-range scans of the Chapel exterior, while the X 330 was used for closer-range scans of the building interior, as well as exterior details.

The C10 crew was headed up by Geospatial Information Officer Roger Clarke of Peterson Air Force Base, who provides infrastructure mapping for facility maintenance. Clarke’s unit is currently the only Air Force unit providing laser scanning for Air Force facilities. In this case, his main focus was on working with cadets. “We were working with one of the cadets on a research report,” he recalls. “The idea was that he would use point clouds to create a Revit model, and to 3D-print a small model for things like wind tunnel testing. Working with Autodesk, we were able to combine interior and exterior point clouds and get everything he needed — the only thing left out of this scan, due to complexity, was the mechanical room.”

Kelsey says both of the laser scanners performed well, with some differences between the two: “We were using the X 330 to test targetless registration (linking point clouds without the use of special markers set for the purpose) in our ReCap Pro product and frankly, it was amazingly fast in the building interior. But on the exterior, we couldn’t keep up with the C10 — targets are still useful in some situations.”

Kelsey himself, a certified UAV pilot, was able to capture “breathtaking video” and useful images of water damage on the Chapel roof with the drone-mounted camera. Photogrammetric data collection, however, was not as successful. “We did do a four-minute flight inside the Chapel, but that seemed like enough — it really was a high risk to some of the Chapel features,” says Kelsey. And on the exterior of the building, the many highly reflective and/or clear surfaces caused glare that interfered with photogrammetric data capture. “That’s the nature of these projects; we’re experimenting, trying to find the limits of current technology, and what can be improved,” he notes.

But there was still plenty of data to work with. Using Leica’s Cyclone and Autodesk’s ReCap point cloud–processing solutions, an accurate point cloud was generated; this served as a reference for the creation of a detailed building model in Autodesk Revit, which in turn was used for testing and analysis of the Chapel’s structure, exterior wind flows, computational fluid dynamics (CFD), and lighting. 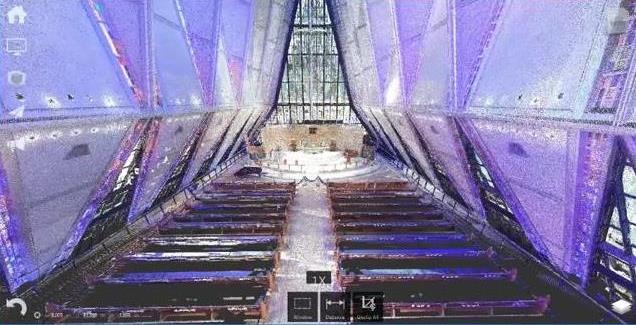 The point cloud of the chapel interior, seen above in Autodesk ReCap, helped the team create a detailed building model in Autodesk Revit, below. 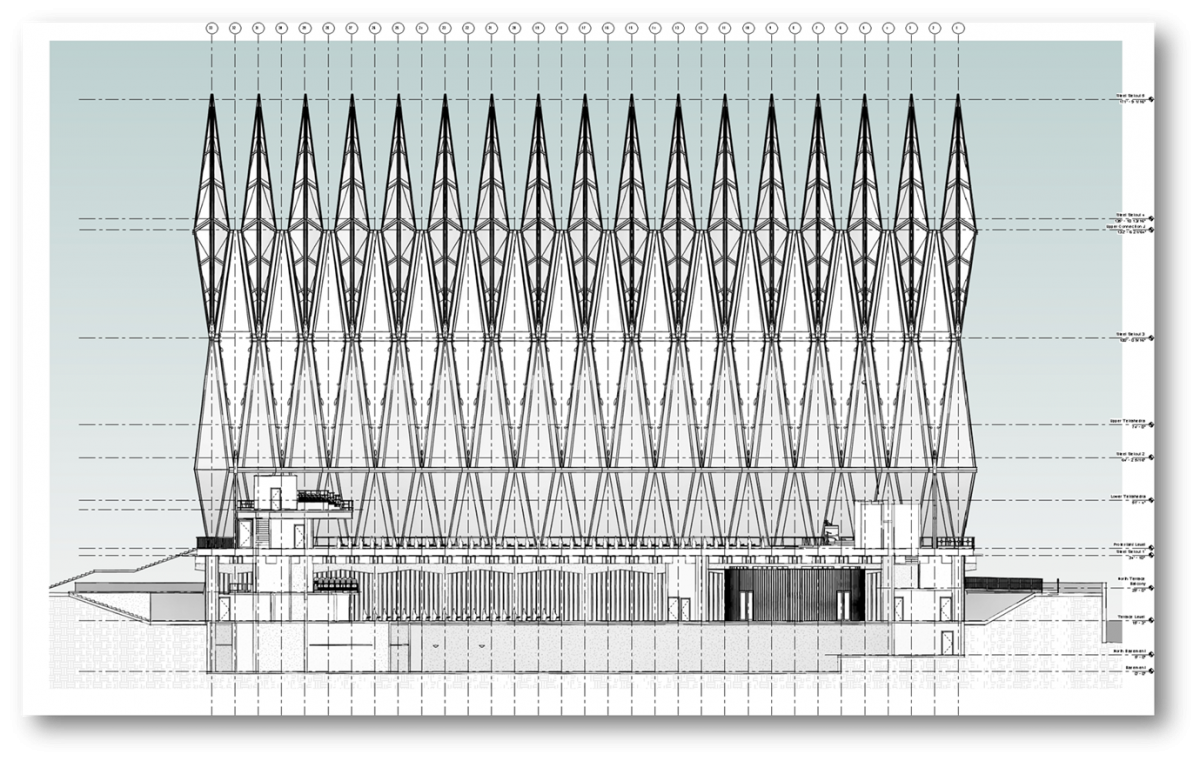