Unencumbered by preconceived notions, teens experiment with technologies of tomorrow.


Mike Santolupo was overseeing the development of a concept car, code-named Evolution. Set to be complete in four to six months, the exotic-looking passenger vehicle would incorporate wheelchair access, among other features. The rear hatch would open to release a ramp, allowing a wheelchair user to drive straight into the car.

Santolupo felt fortunate that he was surrounded by a team of designers unencumbered by preconceived notions of how a car is supposed to look. Some of the geometry and surfaces his team created might make old-school carmakers raise their eyebrows, but Santolupo wasn't the least bit troubled. After all, his mission was to create a new school of design.

In the 17 years he has been teaching design courses, Santolupo turned his classroom at John Paul II Catholic Secondary School in London, Ontario, Canada, into a ministudio. In his class, aspiring inventors, architects, and industrial designers ranging in age from 14 to 18 use Wacom tablets and refurbished HP workstations loaded with Autodesk AliasStudio, Autodesk SketchBook Pro, Autodesk Inventor, and Autodesk Showcase to put the theory of digital prototyping into practice. 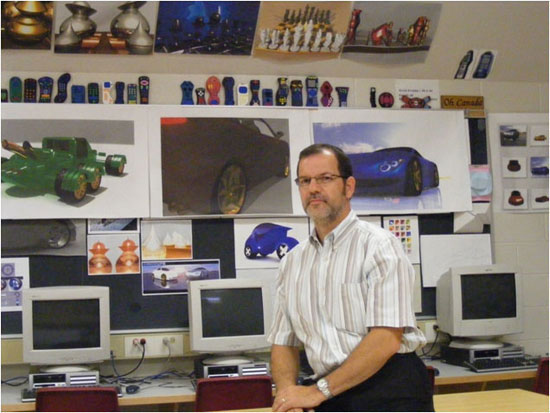 Shedding Preconceived Ideas
One of the reasons John Paul II is able to get easy access to the professional titles in Autodesk manufacturing, media, and entertainment solutions is, according to Santolupo, a reciprocal relationship the school has struck with the software maker.

"Autodesk has been extremely generous in allowing us to use its software for free; in return, I share with them the students' works and serve as a presenter at the annual Autodesk University event," he explained. 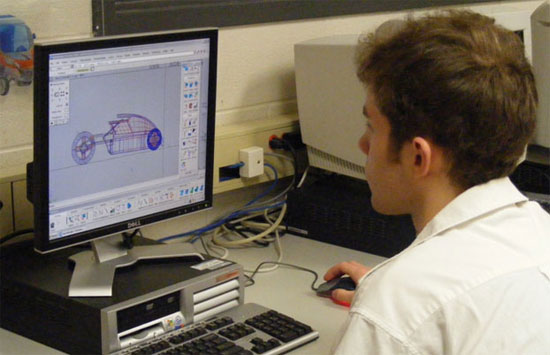 Santolupo's students use professional 3D modeling software from Autodesk in a course that focuses on digital prototyping.

To return the favor, Stephen Stott, Autodesk's educational program manager for Europe, the Middle East, and Africa, dropped into Santolupo's class as a guest speaker to inspire the students.

At Autodesk University last year, Santolupo and Stott jointly delivered a presentation titled "Creativity and Innovation in Education." In the track, Santolupo recounted "The Evolution Project," in which his 11th-grade design class set out "to design a concept vehicle that would improve mobility in an urban environment for the physically impaired and accommodate both driver and wheelchair."

Students use Autodesk Sketchbook Pro to develop their concept, Autodesk AliasStudio to create a 3D model, Autodesk Showcase to produce the rendering, and rapid prototyping to produce a physical model.

"The nice thing about the young people," Santolupo said, "is that they look at things with fresh eyes. When I envision a concept car, it'll be based on what I know about cars, whereas they don't have 25–30 years of thinking what a car should look like, so they're more open to experimenting with new ideas."

A student designed this car, shown here in wire frame models and a final rendering.

If some of his students' ideas seem impractical — for instance, a wheelchair ramp in the rear of concept car — Santolupo would like to point out, "You know what? There are some ideas today that might have seemed impractical 20 years ago." Santolupo happens to be a former automotive designer. Previous to his teaching life, he was a CAD designer for General Motors.

As the workflows here show, digital prototyping can begin from a clay model or a sketch.

Classroom as Studio
Santolupo uses what he describes as the just-in-time approach to software introduction. "I don't give [the students] a five-hour course on how to use Alias," he said. "In their project, when they're ready to do surfacing on their car, that's when I introduce surfacing features to them. I don't overburden them with software training; I let the project drive their training."

In designing his class' physical setup, Santolupo said, "I try to create an environment like a working studio, like an architect's office or an industrial design firm. It's surrounded with stimuli — materials, 3D models, drawings, contemporary colors. It's a place where you'll be inspired by the design process."

In Santolupo's class, students often begin a project with sketching, followed by mass modeling in plaster or clay. "Then we scan [the 2D sketches and 3D models] into Alias so we can develop a wire frame model. Then we add 3D curves and surfaces before rendering the design," he explained.

The refurbished workstations in the classroom, Santolupo acknowledged, are not ideal for running professional 3D software programs. To compensate, he advocated the use of NVIDIA video cards to get the best graphics performance out of the computers.

"Some of our video cards are worth more than our workstations," he chuckled. "But we need good video cards to run something like Autodesk AliasStudio or Autodesk Showcase." The other method of coping with the hardware requirements is by adding RAM, he revealed. 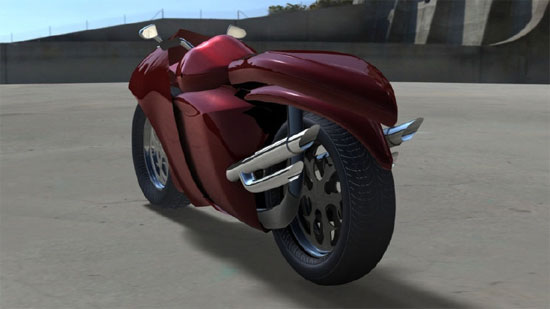 This photorealistic rendering of a motorcycle was produced by John Paul II Catholic Secondary School students.

Digital Lab for Software Makers
Seok-Hyung Bae, a software developer and researcher, and his colleagues Ravin Balakrishnan and Karan Singh from the University of Toronto's computer science department seemed to believe observing the way a bunch of 14- to 18-year-olds use digital sketching could yield clues on how to improve their own software, dubbed ILoveSketch.

"[Seok-Hyung Bae] worked with my students for a few weeks last year," noted Santolupo. "His findings from this exercise will be published [as a paper titled 'EverybodyLovesSketch: 3D Sketching for a Broader Audience'] at ACM UIST (User Interface Software and Technology) 2009. My students will continue working with him next year."

Designed for use with pen tablets, ILoveSketch is described as "A 3D curve-sketching system that captures some of the affordances [inherent qualities] of pen and paper for professional designers, allowing them to iterate directly on concept 3D curve models."

Santolupo thinks investing time and energy in Bae's project is worthwhile. "In the future," he believes, "all forms of sketching will be done digitally."

Message to Software Developers
Santolupo would like to encourage software developers to keep prices affordable. "Look at SketchUp," he pointed out. "[Google] made it affordable to everybody [free for standard version; $495 for Pro version, Windows or Mac]. When you go into an industry, you'll want to use what you know."

Thanks to the free download of Google SketchUp, most students now know the software, which might explain partly why the program has become a ubiquitous concept-modeling application in most architecture and design firms.

"Software makers need to come up with an affordable price structure so that every kid — not just those from affluent school districts but from every background — can experiment and learn with their technologies," said Santolupo.