Facing a complex project with an aggressive timeline, Mortenson | Clark created a 4D model within Bentley Systems' SYNCHRO to organize over 151,000 components and simultaneously construct all buildings for the Chase Center Development in San Francisco. In addition, the company was the Year in Infrastructure 2019 Award Winner; Going Digital for Advancements in 4D Construction Modeling.

After nearly 50 years in the city of Oakland, the Golden State Warriors’ ownership decided to move the team into a new space in San Francisco for the 2019-2020 National Basketball Association season. The $1.4 billion Chase Center includes an 18,000-seat arena, as well as two 11-story office buildings, a broadcast studio, a retail center featuring more than 20 shops and restaurants, 3.2-acres of publicly accessible plazas and open space, and a 925-space, below-grade parking structure. All these elements needed to be constructed within 31 months when the Mortenson | Clark joint venture broke ground on the project at the start of the season. Additionally, construction would need to account for existing buildings and other construction sites in the area.

In anticipation of being awarded the project, Mortenson | Clark created a 4D model of the proposed arena using Bentley’s SYNCHRO. This visualization separated the facility into definable features, clarified the relationship between the base structure and the façade, and influenced the progression of work. During planning, Mortenson | Clark determined that all five campus structures would be constructed simultaneously. The team approached the construction of the arena by breaking it into four pieces and progressing all levels of a quadrant simultaneously. The organization also used the 4D model to demonstrate the full impact of construction on the neighborhood to stakeholders and the public. 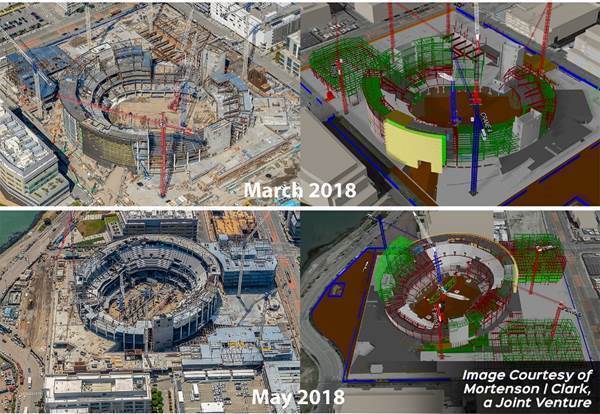 Visualization with SYNCHRO not only helped stakeholders find and address 468 sequence issues, but it became the basis of a mixed-reality experience within Microsoft’s HoloLens. Image courtesy of Mortenson | Clark.

Chase Center’s construction schedule involved more than 36,900 individual tasks and more than 92,800 relationships. Visualizing the project allowed Mortenson | Clark to identify and address 468 sequence issues. The company found numerous ways to improve efficiency through the 4D model, including minimizing the length of costly crane rentals. All cranes were modeled to accurate heights and were able to be placed in areas that would not interfere with helicopter flights to the nearby medical center. Automation within the project, which was established using innovative software technology, saved the team an estimated 720 resource hours (90 work days). By using SYNCHRO software, the team was able to meet the extraordinarily tight construction schedule and deliver the project on time. “Chase Center’s 4D construction model established trust and confidence in the plan and provided a platform for alignment of a craft workforce of over 8,000 men and women,” stated Trevor DeLong, senior superintendent, Mortenson | Clark.

SYNCHRO’s 4D visualization capabilities fleshed out the design and construction schedule through iteration. Schedulers, superintendents, trade partners, and more than 1,500 craftworkers used it to ensure the quality and accuracy of their work. Additionally, a SYNCHRO update in 2018 allowed designers to auto-match code based on the scope of the work and the level of detail in the project, which eliminated errors that came from hard-coding tasks into model elements. Mortenson | Clark brought the full SYNCHRO 4D visualization into Microsoft’s HoloLens, finding ways to improve collaboration and create more advanced AR model engagement in 4D as the project progressed.

In the end, Chase Center now includes an 18,000-seat arena, as well as two 11-story office buildings, a broadcast studio, more than 20 retail locations, 3.2 acres of plazas and open space, and a 925-space, below-grade parking structure. Through 4D visualization, Mortenson | Clark created 1,674 critical schedule activities with more than 151,635 individual resource elements. The visualization not only helped stakeholders find and address 468 sequence issues, but it became the basis of a mixed-reality experience within Microsoft’s HoloLens. Happily, Mortenson | Clark saved 720 hours on planning and construction with SYNCHRO, and the Warriors played their first home game of the season in the new arena.

More about the Companies and Products

About the Author: Marion Bouillin