AutoCAD 2011: These Are a Few of My Favorite Things

Circles and Lines Tutorial: In addition to major enhancements, the latest AutoCAD release adds many small but powerful features.


Editor's note: This article was originally published in the Summer 2010 issue of Cadalyst.

Each new release of AutoCAD includes big-ticket items that everyone talks about — and subsequently writes about. And with each new release, I find myself writing an article describing the small but mighty new features, just to make sure you don't miss these valuable trinkets. This release isn't any different — so let me tell you about a few of my favorite things in AutoCAD 2011.

The Pedit command is old, dusty, and hasn't been updated in more than a decade. New dynamic polyline editing is the best way to avoid hassling with the overly basic Pedit command. In AutoCAD 2011, grip displays appear midway between vertices and provide access to a new right-click menu with the Stretch, Add Vertex, and Convert to Arc commands. Simply hover over the grip and select your editing tool of choice — it is so much easier than bouncing from vertex to vertex in Pedit! A shortcut menu at each vertex contains the Stretch Vertex, Add Vertex, and Remove Vertex options.

The new polyline editing features in AutoCAD 2011 are a big improvement over the old Pedit command.

I know many of you have battled with AutoCAD's Scale List for viewports. You set it up perfectly within one drawing, only to discover the work doesn't apply to any others. AutoCAD 2011 has a default Scale List that truly is persistent across drawings and can be used whenever the Scale List is reset.

Located in the Options menu under the User Preferences tab, the Scale List can be fully customized for both metric and imperial units. Because this new default is saved in the registry, you only need to modify it once; then you are good to go for all your drawings.

Note: You can still edit the Drawing Scale list in the ScaleListEdit command. 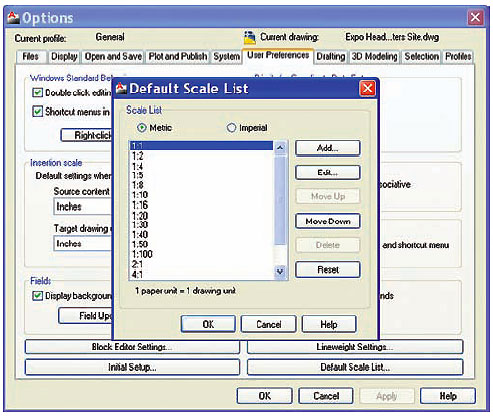 The new default Scale List is persistent from drawing to drawing.

When mirroring a hatch pattern, you may have come to expect that AutoCAD simply will copy that pattern rather than invert it and create a mirrored hatch. Now, when you set the new MirrHatch system variable to 1, AutoCAD 2011 will truly mirror any hatch patterns included within the selection set. Think of this as MirrText for hatch patterns!

Before AutoCAD 2011, you probably found the External References palette less than friendly if your drawing had many external references (xrefs). In AutoCAD 2011, you'll find that each xref highlights as you select it. This little improvement will make xref users very happy!

External references (xrefs) now highlight when they're selected in the External References palette.

We've all seen it: the dreaded "One or more SHX files are missing" dialog box when opening a drawing (usually one sent by someone else). Well, you now have the option to ignore the missing SHX files — just be aware that those objects won't appear — and to tell AutoCAD you always want it to ignore missing SHX files.

Note: If you set FontAlt to a value, you should never see this dialog box anyway!

AutoCAD 2011 has a new option — U for upright — that produces readable text in linetypes. Simply replace R = 0 with U = 0 in the linetype file and your text will be readable in any orientation.

Note: The custom linetypes that come with text in AutoCAD 2011 are readable by default.

Nearly every user has run into the dreaded hatch warning when selecting more than 1,000 hatch objects. This warning was added to AutoCAD years ago to save users from experiencing the inevitably slow computer processing that would result. The value that triggers the warning hasn't been changed in more than 10 years — and let's face it, computers are much faster now. Consequently, AutoCAD 2011 has increased that value to 10,000.

There you go: Just a few of my favorite little gems in AutoCAD 2011. Give them a try and you'll be on the road to instant productivity. Until next time, happy AutoCAD-ing!