Editor's note: Through a sponsorship by Autodesk, Cadalyst editors bring you this feature, part of a special series of articles that highlight the role of AutoCAD and 2D design in today's demanding CAD work flows. Watch for the next installment next month.

To say that Parsons Brinckerhoff is a large architecture, engineering, and construction management firm certainly would be an understatement. Founded in 1885 and headquartered in New York City, the firm employs more than 14,000 people and has 150 offices worldwide. One of the company's earliest projects was the original Interborough Rapid Transit (IRT) line of the New York City subway. Today, Parsons Brinckerhoff is a leader in the design and operation of infrastructure, and its list of projects is huge — both in number and scope — and includes transit systems in Atlanta, San Francisco, and New Delhi; airports in Hong Kong and Washington, D.C.; the North American Air Defense Command (NORAD) in Colorado; the H-3 highway in Hawaii; and the Detroit–Windsor Tunnel. Parsons Brinckerhoff also is a major Autodesk customer and runs its own in-house authorized training center.

To say that AutoCAD is a major factor in most Parsons Brinckerhoff projects, therefore, also would be an understatement. According to Rebecca Arsham, training manager at Parsons Brinckerhoff's CAD services group in San Francisco, Parsons Brinckerhoff uses "just about any and every product that we can in the Autodesk suite to get the job done." Nowhere is this integration of the wide array of Autodesk software more evident than it is in the Presidio Parkway project. 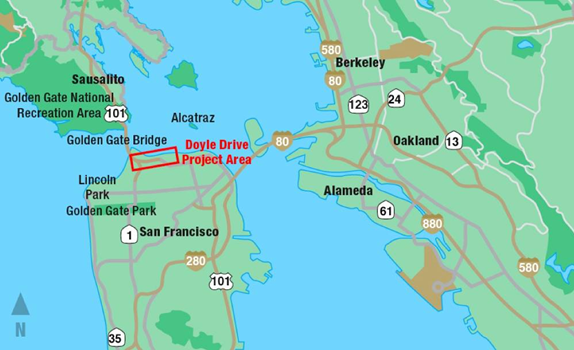 The Presidio Parkway project involves the replacement of the existing south access road to the iconic Golden Gate Bridge in San Francisco. The existing roadway, presently known as both Doyle Drive and Route 101, is structurally and seismically deficient and must be replaced. Each weekday, more than 100,000 vehicles travel between Marin County and San Francisco over the Golden Gate Bridge along the 1.5-mile-long Doyle Drive. The roadway is facing the same problem that threatens other parts of our nation's infrastructure — the ravages of time and continual use. Originally built in 1936, Doyle Drive has reached the end of its useful life.

Replacing this aging roadway is critical for seismic and traffic safety reasons, and it also provides an opportunity for major design improvements. Doyle Drive was designed originally to funnel traffic over the Presidio military base using an elevated roadway. But today, the adjacent area is home to residents and businesses and provides open space for events and outdoor recreation. The former base now is part of the Golden Gate National Recreational Area. In addition to bridge access, Doyle Drive links to the Golden Gate National Recreation Area and the Palace of Fine Arts.

The new project design called for a parkway, not just a freeway. The partnership of agencies responsible for the project — including the San Francisco County Transportation Authority (SFCTA) and the California Department of Transportation (Caltrans) — turned to Parsons Brinckerhoff to design and manage its construction and to create design visualizations that could be shared with the public, both to help them understand aspects of the design and to plan for the continued flow of traffic and periodic closures of Doyle Drive.

"It's a massive project," explained Tristan Randall, a virtual design and construction (VDC) engineer at Parsons Brinckerhoff. "It involves four tunnels, 10 bridges, and 15 major retaining walls," and will cost $1 billion. A new high viaduct will vary in height from 66 to 115 feet above the ground. Six of the columns supporting that viaduct are 12 feet in diameter, requiring a special oscillator rig to excavate holes as wide as 130 feet. The larger, deeper columns result in longer spans between columns, opening up views from the Presidio to San Francisco Bay. Construction on the parkway began in 2009 and is scheduled to be completed in 2014.

Six of the columns supporting a new high viaduct are 12 feet in diameter, enabling longer spans, which in turn open up views from the Presidio to San Francisco Bay. (Image courtesy of the Presidio Parkway project.)

Two-dimensional production drawings for the project are being developed using Bentley MicroStation in conjunction with Arup, another large architecture and engineering firm whose structural projects have included the Sydney Opera House and the Centre Pompidou in Paris. To create the design visualizations, however, Randall and the VDC team at Parsons Brinckerhoff, aided by contractor R&L Brosamer and its subcontractors, work in 3D with an assortment of Autodesk software. 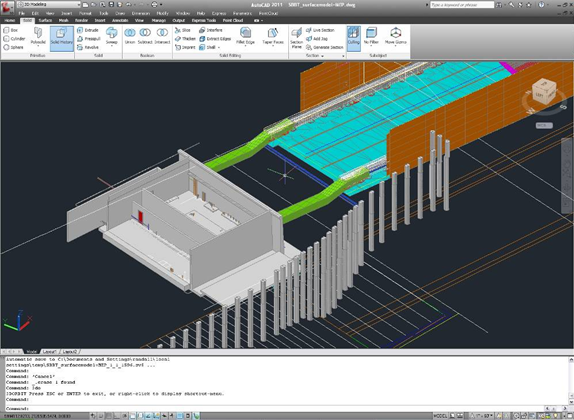 "We're using several different tools to do that, in order to evaluate potential clashes, to coordinate several different systems on site, and to evaluate the constructability of the designs," said Randall. Their tools include AutoCAD, AutoCAD Civil 3D, and all three flavors of Autodesk Revit, as well as Bentley MicroStation and InRoads. They use the AutoCAD DWG file format to pass information between these different packages.

"Typically, we're developing the roadway geometry in Civil 3D," explained Randall. "We're defining the alignment and the profile, superelevation, creating corridors from that information, evaluating cut and fill, developing grading, and using that as the basis to define the geometry of the roadway and of the highway structures that support the roadway." The team next turns to the latest 3D tools in AutoCAD 2011 to develop additional structural content and eventually brings that content into 3ds Max to create complex models and animations for public outreach. "The DWG format is the basis for the transfer between the software," said Randall.

Cross-sections of one of the Presidio Parkway tunnels show the roadway slab with embedded high voltage lines (blue), electrical conduits (orange), drainage (red), and fire protection (green). These models were created in AutoCAD 2011 by sweeping profiles along paths created in Civil 3D. (Images courtesy of SFCTA and Parsons Brinckerhoff.)

After the team at Parsons Brinckerhoff lays out the project geometry in Civil 3D, they use that geometry as a template for defining the structural and mechanical components. For example, designers will use the edge of the roadway shoulder as a guideline and then use tools in AutoCAD to loft or sweep meshes and surfaces along those paths to create the geometry for the visualization models. "The tunnel has highly complex geometry," said Randall. "We've got variable superelevation. We've got both a vertical and a horizontal curve. We have different wall cross-sections all the way across the tunnel. And we're basically embedding all these systems in duct banks that run alongside the tunnel, using the AutoCAD tools extensively. It's very easy for us to use Civil 3D almost like a wire-frame template and then use the new functionality within AutoCAD 2011 to create the shapes, the meshes, and the surfaces."

Engineers used AutoCAD to model structural, mechanical, and drainage systems, as well as all of the structural concrete reinforcing bars. (Image courtesy of SFCTA and Parsons Brinckerhoff.)

Randall explained that the new parametric tools in AutoCAD make it much easier to propagate changes through the model. "We're using both AutoCAD parametrics and Civil 3D parametrics with defining geometry," he said. "Roadway geometry typically doesn't change, but the highway structures are often changing very rapidly even at very late stages in construction to accommodate potential conflicts with tunnel systems. So we're certainly seeing advantages with being able to quickly modify and regenerate our surface, mesh, and solid content simply by using that change propagation functionality." 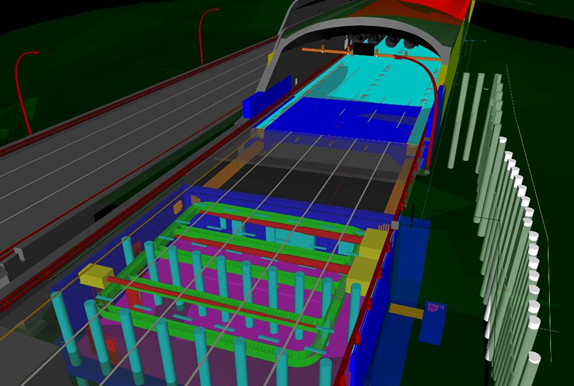 By making the roadway and structure near the tunnel portal transparent, Parsons Brinckerhoff engineers can see the electrical substation (modeled in Revit MEP) concealed within a bridge abutment, alongside a temporary shoring wall. (Image courtesy of SFCTA and Parsons Brinckerhoff.)

According to Arsham, various project team members will often turn to AutoCAD to produce cut sheets and other drawings that might be required as part of a deliverable set. The Presidio Parkway project began within Parsons Brinckerhoff nearly 8 years ago. At the time, they had three design alternatives with as many as five options within each alternative. At that phase, almost all of the work was done in AutoCAD.

Randall's team also uses Navisworks extensively and finds it crucial to their coordination efforts on the project. Randall elaborated, "We use it as the central repository for 3D content. We use it to communicate with the design team. We use it to run coordination meetings and often even for drawing production."

When completed, the new roadway will be tucked into the natural contours of the Presidio and the Golden Gate Natural Recreation Area, creating a spectacular regional gateway featuring direct access with enhanced pedestrian connections within the Presidio to the Main Post, Crissy Marsh, the National Cemetery, and historic batteries. The design will enhance the experience for bicyclists, pedestrians, and transit riders and allow pedestrians and bicyclists to cross over or under Doyle Drive at numerous locations in accordance with the Presidio Trails and Bikeways Master Plan. The parkway will have wider lanes than the existing road and will improve traffic safety by incorporating continuous shoulders for emergency and disabled vehicles. 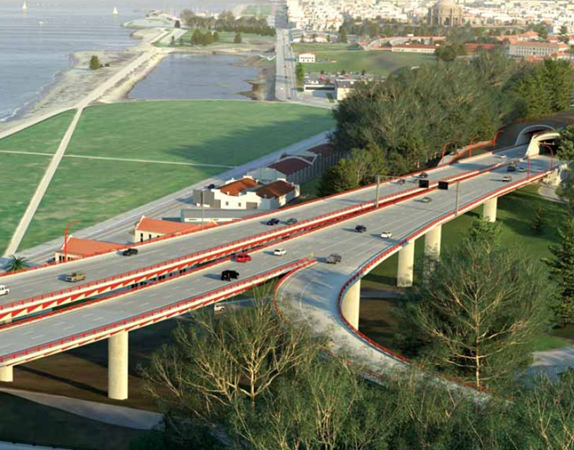 The combination of elevated viaducts and tunnels will not only improve vehicle safety but also enable pedestrians and bicyclists to cross over or under the new parkway at numerous locations. (Image courtesy of the Presidio Parkway project.)

Work on the new parkway will be phased to keep traffic flowing and move vehicles off of the old roadway and onto the new structures as soon as possible. (Image courtesy of the Presidio Parkway project.)

Completing the transfer of traffic will necessitate several extended weekend closures of Doyle Drive. To help citizens understand and plan their commutes around the construction, the VDC team at Parsons Brinckerhoff used both Autodesk 3ds Max and Navisworks to create static and animated studies, many of which are available on the Presidio Parkway web site.

They also used the VDC data to create the Presidio Parkway Transportation Simulator, an interactive simulation that combines three displays, a steering wheel, and gas and brake pedals to let individuals see what it would be like to take a drive on the new parkway. The simulator currently is on display at the Autodesk Gallery at the company's offices in downtown San Francisco. 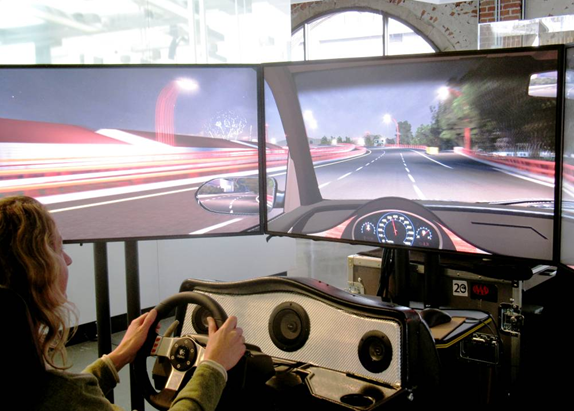 Randall noted that his team's use of innovative methods based on AutoCAD has helped reduce the amount of time that people will use the existing structure and move traffic onto the new parkway as soon as possible. As he described, his team focuses "on generating content that can be passed to several different areas and used for clash detection and design visualization as well as just drawing production."

Parsons Brinckerhoff has used its combination of Autodesk tools on several projects, including the redesign of the east span of the San Francisco–Oakland Bay Bridge. On project after project, AutoCAD remains the crucial link in making Parson Brinckerhoff's designs a reality.