AutoCAD for Mac Is Back!


Editor's Note: This article was originally published in the Fall 2010 issue of Cadalyst magazine.


I remember 18 years ago when Autodesk made the announcement that it would no longer be developing AutoCAD for the Macintosh platform. I also remember the myriad sad architects and other Mac users that were distraught about this decision. Nothing could thrill me more than to see AutoCAD back on the Mac and that void filled for Mac lovers everywhere.

It isn't as if users haven't been using AutoCAD on their Macs. In fact, plenty of people have been using Bootcamp, Parallels, or VM Ware Fusion to do exactly that. But it just wasn't the same; it wasn't the true Mac experience. They were essentially living in the Windows world on a Mac — definitely not the same. They wanted the Mac experience with a native Mac application, and that is exactly what they can get now. This new version is not a port — it is the real deal running natively on Apple Mac OS X (pronounced "ten," not "X," if you want to maintain Mac coolness).

For starters, Mac users might have a Magic Mouse or Magic Trackpad. They also rely heavily on their keyboard trackpads (for those who use laptops) or Magic Trackpads. The Magic Mouse will completely stump Windows users, because it has no physical right-click button or scroll wheel for zooming and panning. (We shudder at the thought!) The good news is that you can choose to use your favorite Windows mouse with your Mac, so no worries there.

AutoCAD for Mac supports Gestures (no, not those types of gestures!). Gestures are one- or multiple-finger motions made across a trackpad or Magic Mouse. For example, they might use a two-finger swipe across the trackpad to pan or the infamous pinch to zoom. A simple swipe up and down the Magic Mouse does an easy zoom — no wheel needed! And who doesn't love the four-finger swipe (Exposé) on the trackpad to view all your open files; I really wish Windows had that one!

The user interface of AutoCAD for Mac also looks and feels like a native Mac application. You won't find a ribbon here, because that is part of the Windows experience. In AutoCAD for Mac you will find the application menu bar expected in a Mac program (pull-down menus, to the standard AutoCAD user). There are tool set palettes, a Layer palette, and a Properties Inspector, which will be much more familiar to a Mac user than a Properties palette. Of course, it has the Command line (heaven knows, we can't live without the Command line) and the UCS icon, status bar, and coordinate display. You'll even find the Viewcube tool to help you orbit around in 3D. 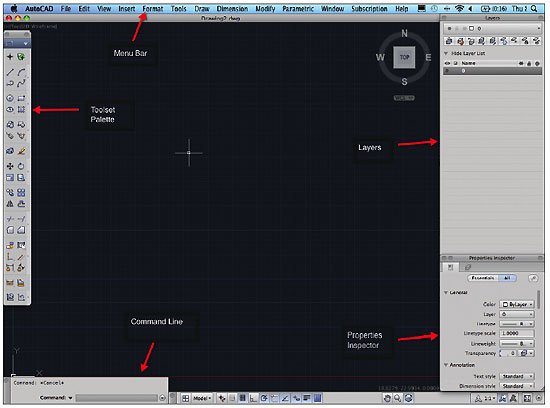 The AutoCAD for Mac user interface looks and feels like a native Mac application.

The tool set palettes work much the same way as the toolbars in standard AutoCAD, with flyouts and the ability to do some basic customization. Three sets of tool set palettes — drafting, annotation, and modeling — are included.

If you're having a problem finding a command in the new user interface, try the Help menu; it is much friendlier than the one in standard AutoCAD. You key in a command you are looking for and AutoCAD for Mac will show you exactly where to find it. 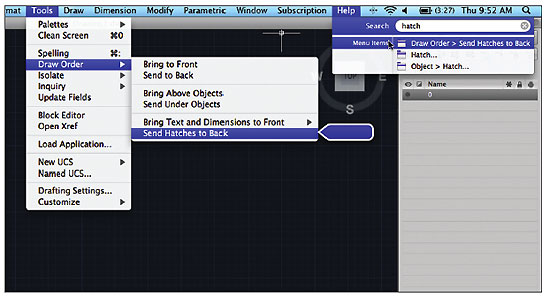 The Help menu bar makes it easy to find commands.


AutoCAD for Mac takes advantage of the robust Spotlight tool, which is a super search engine, and Cover Flow in the Finder, a great file-viewing tool that puts Windows Explorer to shame. 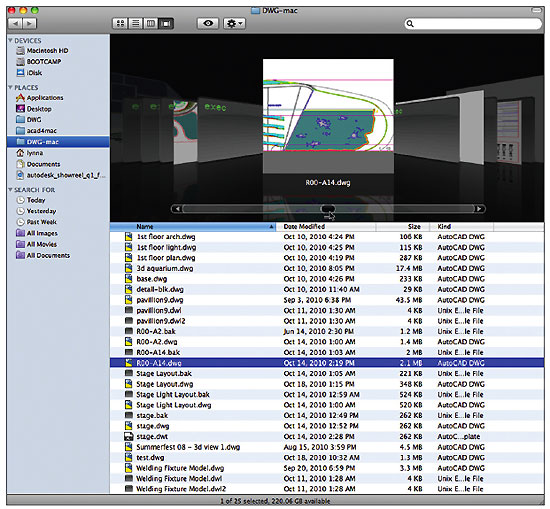 Cover Flow, in the Finder, is a great tool for locating drawings.


AutoCAD for Mac even has 3D surfaces, meshes, and solids from AutoCAD 2011. Now, I won't lie to you — not all the AutoCAD commands made it into AutoCAD for Mac. Autodesk did, however, research the most frequently used commands in AutoCAD and tried to include as many as possible. Think about it. AutoCAD has been adding commands for 28 years. Do you really think everybody uses all those commands? You may miss a couple of features — such as the Express Tools, workspaces, and the Sheet Set Manager — but remember that AutoCAD for Mac was built from the ground up to ensure the ultimate Mac experience, and that meant a few sacrifices to get it out the door. Imagine squeezing 28 years of programming into just a couple! Give Autodesk time, it will definitely catch up and do its best to include your favorite features.

I was hesitant (even reluctant) to give AutoCAD for Mac the old college try — but I am so glad I did! As a PC user of 25 years, I'm not quite ready to make a full-time switch, but I think that Mac users everywhere are going to rejoice and embrace AutoCAD for Mac.