Autodesk Reshapes Itself for the Future

At Autodesk University 2014, the software developer shares its plan for adapting to a new era of design, production, and demand.


Companies of all stripes typically point to outside factors as the source of their most pressing challenges: savage competitors, sluggish markets, supply holdups. It's far less common to hear anything along the lines of "We have met the enemy, and he is us." A version of that sentiment, however, was expressed by Andrew Anagnost at Autodesk University (AU) 2014, held last week in Las Vegas, Nevada. During a press briefing, Anagnost, Autodesk's senior vice-president of industry strategy and marketing, said "we're taking ourselves on, and we're going to knock ourselves down," explaining that traditional design software products are not suited to the new era of computer-aided design.

The first such era, Anagnost explained, was that of documentation; pen-and-paper tasks were largely replicated in digital form. It was followed by one of optimization, in which software could perform modeling tasks. Now, we're entering an era of connection, in which the design system is connected to new means of production. "This isn't fiction, it's happening," he affirmed, pointing to examples of 3D-printed cars and prefabricated buildings that are simply assembled on site.

According to Anagnost, the dramatic change in how products and infrastructure are generated is just one type of disruption shaping the modern era. We're also experiencing a new landscape of demand; consumers are becoming more knowledgeable — and more demanding — about where their purchases come from, the ethics of how they're made, and how long they will last. In addition, they've come to expect an unprecedented level of choice in the marketplace. "These people want variety; they want things that are customized for them," Anagnost noted.

Finally, the definition of what makes a "good" product is changing. Consumers expect products to not only maintain their function for a certain length of time, but to actually improve during ownership, and to be connected to the world around them. "People expect the product to change, evolve, and get better over time," said Anagnost. For example, he compared a Tesla Motors car, which will be improved over its lifetime through software and hardware updates, to a traditional vehicle, which will slowly degrade in value and usefulness from the time of purchase.

As Chief Technology Officer Jeff Kowalski put it during his keynote address, the things we currently design and produce are "dead" — they're static objects that can't sense the world around them and respond to it; they can't collaborate with each other, either.

Kowalski stressed the importance of creating things "that are capable of engaging dynamically with the world." With the proliferation of mobile communications technologies and low-cost sensors, items as prosaic as household thermostats can take action based on input from the world around them. They should also be capable of coordinating responses with their fellows, said Kowalski, who opined that the Internet of Things, plural, is not an accurate term: "[These objects] don't talk to each other, they only talk to me." The important questions to explore, he told the audience, are What should they be aware of? and What should they do in response?

Planning for the Future

So what does Autodesk propose, in the face of these challenges? It has a number of solutions in mind, including new types of design software. The company is heavily promoting recent software releases such as Fusion 360, which supports an end-to-end spectrum of product development tasks, from industrial and mechanical design to visualization to machining. "[It's] built to support the new way things are made," said Anagnost. The cloud-based 3D CAD/CAM solution emphasizes collaboration, and enables multiple users to work simultaneously by branching off a portion of the model, then merging their work back into the whole. Since its commercial availability was announced a year ago, 110,000 users have created Fusion 360 accounts.

Now, Autodesk is expanding its reach, said CEO Carl Bass: "[Fusion 360 is] built into all 360 products today, and [will be included with] all of our products in the future." Bass observed that in a world of infinite computational resources, demanding tasks such as rendering should no longer be seen as precious commodities. "In this new world, collaboration and design management are built into everything."

Fanning the embers of the manufacturing revolution. "Not since the industrial revolution has there been such a broad and radical rethinking of the way that we make things,” said Bass. He pointed out that although it offers unique advantages — for example, "shape complexity is free" — the high costs and low reliability of 3D printing currently make it "kind of a pain." That sentiment was echoed by Mary Hope McQuiston, senior director of consumer and 3D printing marketing: "While the future [of 3D printing] is really bright, today it's pretty dark." She pointed to a lack of market penetration — only 200,000 enterprise and consumer printers have been sold worldwide — and the fact that up to 75% of the models produced are failed prints. 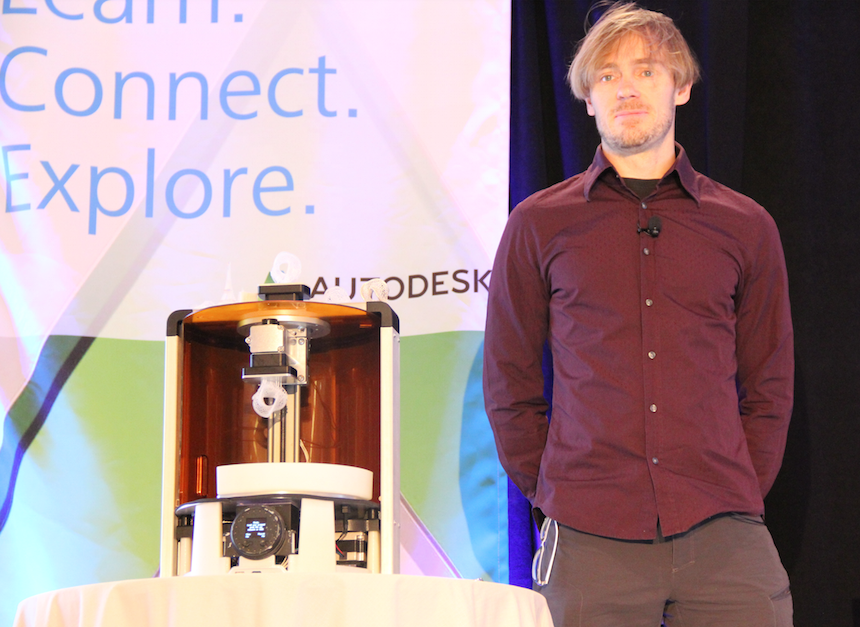