At the annual user conference, attendees learn about the powerful trends reshaping Autodesk and the CAD industry, from infinite computing to digital fabrication.


A tide of technological change is sweeping across the CAD landscape. Mobile computing, the cloud, the maker movement — you can't run from developments of this magnitude. The only question is, will you get hammered by these monster waves, or ride them to new opportunities? At Autodesk University 2011 (AU), held November 29–December 1 in Las Vegas, Nevada, the company's leaders strongly urged the latter.

During a preshow media briefing, Senior Vice-President and CMO Chris Bradshaw explained that Autodesk's customers are dealing with a time of unprecedented change. As one example, he shared the projection that ten billion mobile devices will be in use by the end of the decade — far more than the number of people on the planet. "It's a little bit scary," he acknowledged, "[but] at the same time it's a huge opportunity."

Steve Blum, senior vice-president of worldwide sales and services, quoted a prediction from IT market advisory firm IDC: By 2014, 46% of all professionals will be "mobile only." That trend will profoundly alter workflows, software development, and even the traditionally centralized IT environment as users become IT consumers — selecting and purchasing their own iPads, for example. "The cloud and mobile are changing the way people are thinking about getting their jobs done," said Blum.

Blum explained that an expanding consumer design market, supported by social media networks, is changing the competitive landscape. With the help of new marketing and funding resources such as Kickstarter, tiny startups are able to go head-to-head with well-established firms. "Ecosystems that didn't exist in the past are changing the game and leveling the playing field," he noted.

Emerging economies are another source of industry-rattling change. As populations around the world enter the middle class, Blum observed, countries such as India that were previously viewed as hubs of cheap manufacturing are becoming design oriented — and globally competitive in that arena. At the same time, as cities swell with those increasingly urban populations, the demand on AEC providers will grow in parallel. "Everywhere in the world, infrastructure is undergoing massive upgrades," noted Amar Hanspal, senior vice-president of platform solutions and emerging business.

Hanspal noted that the rise of the cloud and powerful mobile devices — the latest iPhone has more processing power than the first Space Shuttle — presents an opportunity to get technology in the hands of everyone, not just businesses. "It's the beginning of a vector that there is no turning back from ... it's not that it's in front of us, we are smack in the middle of it."

These days, no event seems complete without a discussion of cloud-based software and services, and AU 2011 was no exception. On the first day of the conference, Autodesk showcased Autodesk 360 for BIM, a building information modeling (BIM) solution designed to improve how AEC project team members connect, collaborate, and communicate on building projects. The solution is designed to handle multidiscipline models, thousands of drawings, and other project information, the company reported. It comprises the currently available Autodesk Vault Collaboration AEC on-premise data-management solution; Autodesk Buzzsaw, a cloud-based project collaboration tool for secure data exchange with external partners and distributed teams; and Autodesk 360 Nexus, a cloud-based lifecycle management solution introduced earlier in the day for the manufacturing industry that is also planned to support configurable AEC workflow and business process–management needs.

The following day, Autodesk announced its agreement to acquire Horizontal Systems, a developer of solutions for collaboration, data management, and lifecycle management, which the company plans to use to extend its existing cloud-based BIM tools.

The Autodesk Cloud Lounge at AU was devoted to showcasing the company’s range of web-based features, products, and services related to rendering, energy analysis, design optimization, and mobility and collaboration. Autodesk Cloud Documents and the Autodesk Design Review mobile app are available to all customers (1 GB storage [3 GB for subscription customers] is free); for more information, see Cloud Benefits for All Subscribers on the Autodesk web site.

With three million downloads of cloud-based CAD-editing app AutoCAD WS and one million users of Autodesk cloud and mobile apps per day, it may seem that the company feels compelled to move everything cloudward. Hanspal explained, however, that Autodesk is not interested in "cloud for cloud's sake," but will pursue that path only at the times when it makes sense.

And when is that, exactly? Hanspal believes that the cloud excels in four areas:

To explain the scope of this empowerment, Brian Mathews, vice-president of Autodesk Labs, drew a comparison to an entirely different industry. When technology enabled consumers to pull music from physical media, change and rearrange it to suit their tastes, and create new copies of it, the music industry was changed forever. Now, users are applying that rip/mix/burn pattern to atoms instead of music via capture/design/create technologies, Mathews explained. Until now, he asserted, the CAD industry has been overly focused on the design portion rather than the complete sequence.

On the capture end of the process lie ubiquitous sensors and a proliferation of point clouds, their collection driven by falling laser-scanning costs. The mix stage is likewise enabled by plummeting costs — for computing, in this case — and the ability to put data in the cloud. "Infinite computing isn't about doing the old thing better, cheaper, and faster; it's about doing what you couldn't do before," said Mathews, noting that users can now perform analyses mid-project instead of waiting until their design is completed. And in the place of burning a CD are multiple creation options: rendering, collaboration, and fabrication. "If there's anything that's really going to change the world," Mathews said, "it's 3D printing." Resolution is doubling about every two years and the number of materials has grown from 50 to 75 in a year, he said — all while prices are falling and the machines are becoming increasingly easy to use.

Waving Goodbye to the Past

By the time Chief Technology Officer Jeff Kowalski took the stage at the AU 2011 General Session, the message was clear: The old days are gone, and they are not coming back. However, the tone was hopeful: "You can embrace the sea of complexity and use these waves of disruption to take you where you want to go," said Kowalski.

He identified five such "waves": 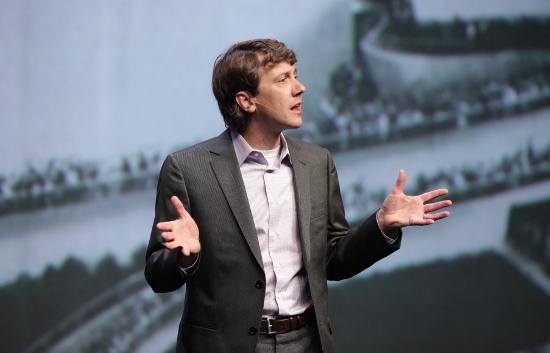 At AU 2011, Autodesk Chief Technology Officer Jeff Kowalski explained that the technology trends disrupting "business as usual" — including infinite computing and digital fabrication — offer opportunities to those who embrace them. Image courtesy of Autodesk.


Chris Anderson, editor-in-chief of Wired, is a fervent advocate of upstream innovation. He stated that people using simple, democratic technologies — including inexpensive sensors and Internet connectivity — can create a new "Internet of Things" and change the world. Whereas in the past it was a challenge to be both an inventor and an entrepreneur, those who develop ideas can now retain control over them and take them to market directly. "We're going to figure out if there's a different way to use technology than the one big companies brought to us," Anderson said.

Autodesk President and CEO Carl Bass concluded the General Session with his own paean to the power of technology: "The best way we have to increase our capacity [to solve problems] is through tools [that] amplify our capabilities." In fact, Bass continued, we are building things — such as the supertall Shanghai Tower — that would not be possible without the latest generation of digital tools.

Recent additions to Autodesk's toolbox include 123D Sculpt for the iPad — "We live in a 3D world, so why don't we sketch in 3D?" — and 123D Catch, a photograph conversion tool based on Autodesk Labs' Project Photofly technology. "123D Catch allows you to start with real-world object and quickly and easily get a 3D model," explained Bass. The emphasis on free, simple, easy-to-use design tools supports the company's stated interest in the growing market of nonprofessional users.

And access to the company's design software portfolio — free and paid — is now available through a greater variety of devices, noted Bass. "We're blurring the boundaries between devices and platforms so you can design regardless of [whether you're] using a laptop, tablet, or smartphone."