A small Seattle architecture and interior design firm uses AutoCAD to create stunning hotels — inside and out.


Editor's note: Through a sponsorship by Autodesk, Cadalyst editors bring you this feature, part of a special series of articles that highlight the role of AutoCAD and 2D design in today's demanding CAD work flows. Watch for the next installment later this month.

Architects have been using AutoCAD since the program was released in 1983 and have come to rely on many of the software's features and functions to develop everything from concepts and preliminary designs to complete sets of working drawings and photorealistic renderings. Although the software has become increasingly powerful in the years since its introduction and today rivals other programs in terms of its 3D modeling capabilities, many firms still rely on the program primarily for serious 2D work — and Autodesk is serious about supporting those users by continually upgrading AutoCAD's 2D functionality.

One firm that is firmly planted in the 2D AutoCAD space is Degen & Degen, a full-service architectural and interior design firm founded in 1997 by the husband-and-wife team of principal architect Jeffrey Degen and principal interior designer Anita Degen. The Seattle-based company works on projects throughout North America and Asia, including work for major international hoteliers such as Marriott, Hilton, Starwood, and InterContinental, as well as independent owners and developers. Projects include both new construction and renovation, and no two are ever alike. 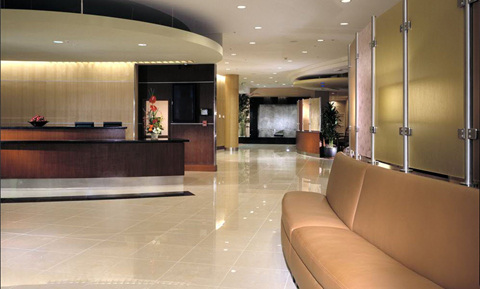 "There's really no distinction between interior and exterior," said Jeffrey Degen. "Both must be developed simultaneously. At Degen & Degen, every project team has both architects and interior designers from Day One. The design concept is truly an evolution of both interior and exterior."

With just 15 employees, Degen & Degen also is typical of many architectural firms, large enough to take on interesting projects competently, yet small enough so everyone can stay connected to the work. Team members use AutoCAD throughout the design and documentation process, starting with conceptual design and extending through to construction documents, which are created entirely in AutoCAD. Designers use AutoCAD almost exclusively for 2D work, create 3D concept models using Google SketchUp, and employ outside consultants to develop renderings using Autodesk 3ds Max. The firm has customized many aspects of AutoCAD to meet its specific needs.

Much of that customization focuses on tool palettes. Daniel Herhold, project architect, explained, "When we hire new people, the [customized] palettes ensure that their drawings are set up properly and [that] they maintain the standards of quality for our drawings. We still get consistency regardless of the person's level of experience."

The palettes, as well as other software customizations, were prepared in-house by staff members. Even drawing standards such as layers, linetypes, and lineweights are established using custom tool palettes. "The layers are all built into our tool palettes, so we can just drag them in," said Herhold. "So depending on what kind of drawing you're doing, you can start with a prototype template and just bring them in." The firm uses different layering systems depending on client requirements and whether a particular project involves interiors only or encompasses the entire building. "Pretty much everything is set up using tool palettes." 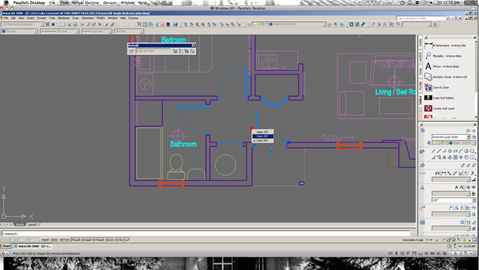 To further ensure that team members adhere to office standards, Degen & Degen uses AutoCAD's built-in standards-checking functions extensively. The firm created several drawing standards files, and the appropriate DWS files are associated with each drawing and then used to perform periodic standards checks. AutoCAD's notification feature alerts team members if they violate standards while they're working on a drawing.

Degen & Degen performs much of its design work for large hotel companies, each of which generally has its own required standards. Because the firm's work often involves renovations of existing properties, the architects constantly receive older AutoCAD drawings and PDF files as base drawings. To bring everything together, Degen & Degen relies on AutoCAD's layer translation tools as well as the software's ability to attach PDF files as drawing underlays.

"We'll sometimes receive PDFs of large-format scans of an existing building that we'll use to create backgrounds," explained Herhold. "It saves us a lot of time instead of having to scale actual paper drawings." Being able to work with a PDF underlay also is much easier than having to use raster image files, which they had to do in the past. Once in AutoCAD, underlays can be adjusted to the proper scale and orientation. "One of my favorite commands in AutoCAD is the Align command," said Herhold, "because I can scale and align things to what I'm working with at the same time."

As in many firms, Degen & Degen uses hatch patterns to represent tiles in reflected ceiling plans. The new hatching tools in AutoCAD 2011 can be real time-savers. "If you don't have the hatch pattern set right at first, you can update it in real time," noted Herhold. Being able to control object transparency, another new feature in AutoCAD 2011, also has been useful, particularly in preliminary design studies. 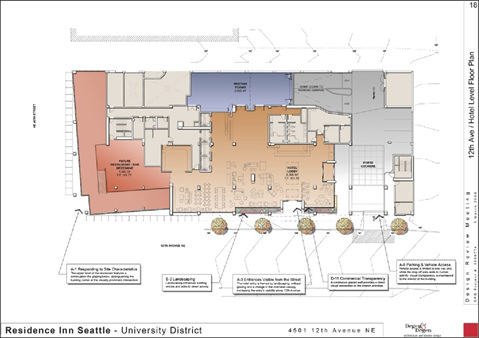 AutoCAD's enhanced grip-editing capabilities also have proved beneficial. For example, when performing preliminary design studies, team members can create a table that lists the area of each space. They outline those spaces using polylines and then link each outlined area to a field in the table. Designers can grip edit the polylines easily to adjust the layout, and the corresponding areas in the table update automatically.

Herhold explained that designers and architects also make extensive use of dynamic blocks, having converted all the firm's standard blocks into dynamic blocks shortly after that feature was added to AutoCAD 2006. "We have different dynamic blocks for things like ADA bathrooms, so we can lay things out quickly to see if everything fits, particularly in existing buildings. You can block it in first and then fine-tune it later." All of the firm's standard doors, windows, and furniture are also set up as dynamic blocks, with each block available on the customized tool palettes. "That's a really efficient way to bring things in and adjust them," said Herhold, "particularly if we're doing a renovation project."

Degen & Degen certainly has done its share of renovation work, and much of it is quite unique. One such project, the renovation of the existing 16-story, 375-room Sheraton Anchorage Hotel and Spa (Anchorage, Alaska), included converting the entire 16th floor into a full-service day spa.

Occupying the entire top floor of the 16-story Sheraton Anchorage Hotel and Spa, the ICE Spa is typical of the firm's work.

Of course, Degen & Degen also does its share of new construction, including the Suquamish Clearwater Casino Resort Hotel and Spa in Washington State. This four-story, 85-room hotel for the Suquamish Tribe (whose leader was Chief Sealth, namesake of the city of Seattle) includes suites, conference space, indoor and outdoor swimming pools, and a stand-alone day spa.

For the Suquamish Clearwater Casino Resort Hotel and Spa, Degen & Degen did everything from master plan to project completion for all architectural and interior design of this waterfront resort.

The firm has also done a considerable amount of work in China, including a new five-star destination resort on the shores of Dianchi Lake in Kunming, a temperate vacation destination in the Yunnan province of south-central China. The firm's concept design for the Kunming Hot Springs Resort blends the rich culture and nature of Kunming with the latest technology to create a one-of-a-kind resort.

Degen & Degen is working on several other projects in China, including the Dongbei World Trade Plaza, a mixed-use development encompassing three high-rise towers with a high-end hotel and a shopping mall in Shenyang, and the interior design for two 22-story office towers at the Wuxi Financial Center in Wuxi.

Degen & Degen created the concept design for two Chinese projects: the five-star
Kunming Hot Springs Resort and the mixed-use Dongbei World Trade Plaza,
including both the architecture and interiors of a high-end hotel.

AutoCAD on the Mac

To meet the project communication needs of its varied clients, Degen & Degen often outputs AutoCAD drawings to PDF files. Team members have found that because of the ubiquity of that format, it's often easier to exchange PDF files with far-flung clients and use them for remote printing instead of sending sets of DWG files. But the firm also uses DWF files and relies on AutoCAD's eTransmit tools for sending drawings and archiving projects upon completion.

Herhold explained that most work is done first in model space and then the firm creates sets of drawings in paper space using AutoCAD's sheet sets to keep all drawings properly organized. Annotative scaling ensures that text, dimensions, hatch patterns, and other scale-dependent objects always are the correct size regardless of the scale at which a particular drawing is placed on a sheet. Sets of documents then can be published from the sheet set, and the team relies heavily on AutoCAD's Autopublish command.

Although Degen & Degen has used AutoCAD for quite a few years, the firm uses Apple Macintosh computers exclusively. Team members use Parallels Desktop for Mac to run Windows and Mac applications side-by-side on one desktop system. Degen & Degen recently evaluated AutoCAD for Mac 2011 but decided to stick with the Windows version of AutoCAD for now because the Mac version is not yet equipped with several features that the practice had come to rely on, such as Autopublish, the Batch Standards Checker, dynamic block authoring, eTransmit and Archive, and the Layer Translator. Perhaps most significantly, it lacks support for tool palettes and PDF underlays. The firm will continue to evaluate future native Macintosh releases of AutoCAD.

Employing AutoCAD in a very practical, traditional manner, Degen & Degen is not on the cutting edge of software use — but the firm definitely pushes the envelope in maintaining its philosophy of service through design excellence.