Circles and Lines Tutorial: You have plenty of reasons to move beyond that old, familiar user interface.


It seems that each new release of AutoCAD includes at least a minor tweak to its UI (user interface). AutoCAD 2012 and 2013 are no exceptions: they have added a couple of really nice features. It's natural to gravitate to the familiar UIs of releases past, but you really should give these new features a try!

We all use the Command line from time to time — no matter how ribbon-savvy we are! One of my favorite AutoCAD improvements is the new AutoComplete feature. AutoComplete appears at the Command line as soon as you start keying in characters, with the goal of saving you valuable typing time. AutoComplete displays all the commands and system variables that begin with the keyed-in characters. This comes in especially handy when you can’t quite remember how to spell a particular system variable! Of course you can turn off this great new feature, but why would you? A right-click at the Command line displays additional controls for this new feature.

AutoComplete helps you find the command or system variable you’re after.


You can control the color and transparency of the new modernized Command line. The semi-transparent command history doesn’t affect the drawing area — and I just love the ability to select command options directly with your mouse (which are now highlighted in blue). You can make the Command line almost "completely" transparent so that it displays only when you hover over it (for those of you who are greedy with your screen real estate).

You’ll also see that your current command is always displayed on the Command line — that should eliminate some careless errors!

I first became aware of the In-Canvas Viewport Controls when working with AutoCAD for Mac. As a fan of that new feature, I was thrilled when it made its way into AutoCAD running on Windows. These options are primarily for those who work in 3D (although I’ve used them for switching between 2D saved views). They display only in model space.

Located in the upper-left corner of the drawing editor, the In-Canvas Viewport Controls make it easy to change views and visual styles and set up tiled viewports. Each of the three columns holds a variety of options.


Clicking on the [–] (first column) lets you control the display of the ViewCube, Steering Wheels, and Navigation Bar. Here you also can set up tiled viewports. 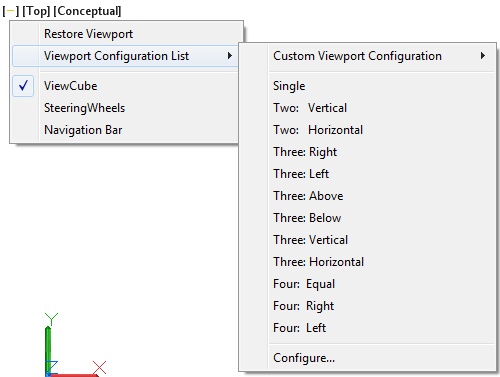 Double-clicking on the [–] fills the screen with the last viewport configuration, or the default.

The default viewport configuration of top, front, side, and isometric views.


In turn, double-clicking on the first column inside a viewport fills the screen with that view. This is a handy way to jump between tiled viewports and a single screen.

The second column deals with saved views or viewpoints. Here you can easily change your viewing angle or go to the View Manager. I love that you can quickly jump from one saved view to another; I use this feature all the time.

The last column allows you to quickly switch to a standard or saved visual style.

You can turn off the In-Canvas Viewport Controls via the 3D Modeling tab of the Options dialog box or by setting VPControl to 0.

I stumbled upon the ability to minimize the ribbon by double-clicking on a tab. With each double-click, the ribbon cycles through the options of minimizing to panel buttons, panel titles, or just tab. Of course, you can get the same result by clicking the arrow at the end of the tabs on the ribbon, but this new method comes in handy.

As I travel around doing presentations, I always poll the audience to see who is using AutoCAD's classic UI. Although the number has diminished over the past couple of AutoCAD releases, quite a few diehards still prefer the old menu-and-toolbar system. AutoCAD 2012 and AutoCAD 2013 make it a little easier to enjoy the best of both worlds by adding a Toolbars button on the View tab of the ribbon. Now you can easily display those custom toolbars you worked so hard to create!

A thorough understanding of AutoCAD's UI can dramatically increase your productivity. Try out some of these new features for yourself. You might just wonder how you lived without them.

Until next time, Happy AutoCAD-ing!