People go to the show because they love the music, but audience members at today's rock concerts are equally blown away by the elaborate staging — moving video screens, rotating stage platforms, and as much pyrotechnics as a Fourth of July fireworks display. Choose any artist from U2 to Lady Gaga. Chances are that all of the staging was designed and built by the same small company — Tait Towers — and every element of those complex stages was designed using AutoCAD. 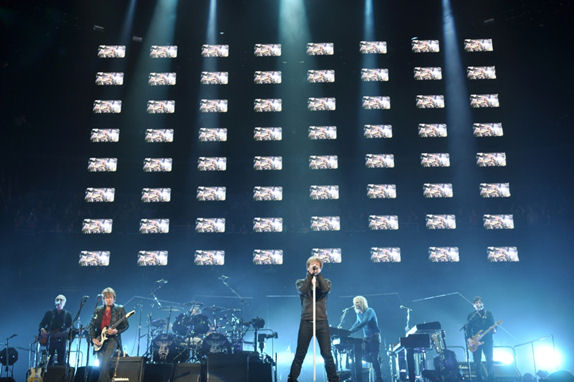 Founded in 1978, the company gets its name from one of the first self-contained lighting towers used in the concert industry. Michael Tait, lighting engineer for the rock group Yes, designed the towers in the early 1970s, and everyone started calling them Tait Towers. The name stuck. Tait figured out that touring shows not only needed good lighting that could be assembled quickly; they also needed good roadworthy stages and sets. Today, the company designs and constructs entire concert productions from the most unassuming location imaginable, a small town nestled in the verdant Amish farmlands of eastern Pennsylvania. Yet for more than 30 years, rock superstars have come to Livitz, Pennsylvania, because Tait Towers is unquestionably the premier touring entertainment company in the world.

It All Starts in 3D in AutoCAD

According to Tyler Kicera, the company's director of design, a band typically hires a designer who is responsible for the concept: what a show is going to look like. "That designer will come to us with anything from a napkin sketch to models," Kicera said. A small team at Tait Towers will then help the designer develop that idea into a modular system that can be built and sent out on the road. "We'll take that designer's sketch, and step number one is to get it roughly drawn in AutoCAD in 3D," using generic versions of the company's standard components.

"From there, we continue to develop the ideas. We send drawings back and forth between the designer and ourselves. And the designer is showing those drawings to the artists and getting their approvals." Kicera says that the process can happen very quickly. For example, one of Tait Towers' recent projects was The Circle Tour for the rock band Bon Jovi. The band's production designer contacted Tait Towers with his initial ideas just a few months before the concert tour was scheduled to begin. Within a few days, the team at Tait Towers had a finished concept ready to go. Kicera and his team then moved the 3D AutoCAD model to Autodesk 3ds Max Design software and produced renderings that showed how the stage would look. Those renderings were then reviewed by the production designer as well as lead singer Jon Bon Jovi. 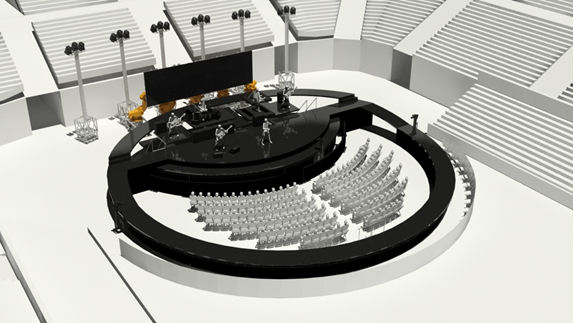 After designing the stage for The Circle Tour in 3D using AutoCAD, the team at Tait Towers produced renderings in 3ds Max Design to help Jon Bon Jovi and his production designer visualize the completed concept. (Image courtesy of Tait Towers.)

Tait Towers designers take advantage of the integration between AutoCAD and 3ds Max Design to create high-quality renderings almost seamlessly. Being able to share near-realistic renderings with the performing artists has reduced their review cycles to half the time it used to take.

Xrefs are Key to Success

Bon Jovi's The Circle Tour features a multilevel main stage with a secondary stage arranged in a circular pattern that extends into the audience. It also features five industrial robots from ABB, which typically are used in industrial manufacturing, but in this case support high-definition LED video screens as well as 1,250 square feet of double-sided video screens hanging above the stage that can break apart into 96 different panels. "We had never done anything with robots before in a touring show," said Kicera. "We were able to put [3D models of] the robots into their positions in AutoCAD and manipulate the robots very precisely into their start and finish locations, and then give those to a vendor who created the path between the start and finish."

One of the keys to the firm's success is AutoCAD's external reference capabilities. Thanks to xrefs, the work could be split among a team of 12 people who could work on a portion of the design, each in its own drawing file, which was referenced back into a master drawing containing the complete 3D model of the entire stage, which included thousands of components, according to Kicera. After the design was completed, Tait Towers' manufacturing team began building the set directly from the 3D AutoCAD files. 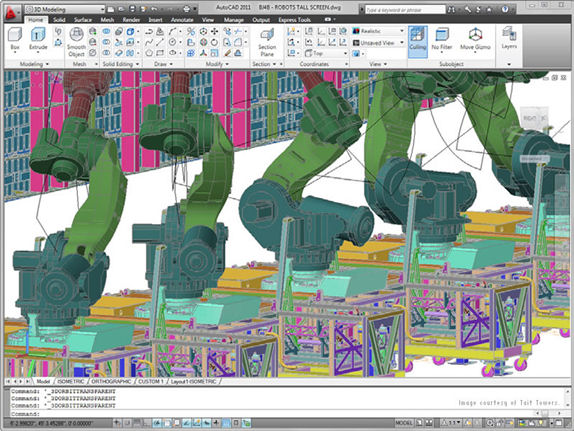 "We've got a full machine shop with flat-bed routers that can do sheet goods and a bunch of vertical milling machines and [computer numerical control] CNC lathes," said Kicera. The company doesn't produce 2D shop drawings. Instead, it uses 3D AutoCAD drawing files to produce the CNC code that in turn drives the machines that produce the finished parts.

According to Tait Towers, other companies in their industry need four to six months to create a stage; Tait can do it in three to four weeks. After creating all the components, the entire set is assembled and tested at the company's headquarters in Livitz before being packed onto dollies and loaded into a fleet of trucks.

Another thing that sets Tait Towers apart from its competition is the company's attention to detail. "We think very much about our end user," noted Kicera. "How does the stage get broken up? How does it pack into each dolly? How do those dollies get packed into the trucks?" In addition to designing the set, team members create exploded isometric views that call out all the parts, so that a production crew knows how to assemble the set.

Tait Towers also creates models showing how stage components fit onto each dolly, how those dollies fit into the 16 trucks that transport the stage from city to city, and how everything get assembled after the show rolls into town. (Images courtesy of Tait Towers.)

Drawing everything in AutoCAD allows Tait Towers to lay everything out as if it were going onto the truck and make sure it is going to fit together and maximize the use of the space allocated. Designers can create the elements and print labels for every piece of equipment, so tour workers know exactly what is in each truck and each dolly within. Those labels are all drawn and printed directly from AutoCAD.

For Bon Jovi's The Circle Tour, 5,000 feet of cable and 6,000 bolts hold the video screens together. The components are packed into 1,000 individual carts and dollies, which in turn are packed into 16 tractor–trailer trucks. At each stop on the tour, a crew of 30 locally hired people work for eight hours to assemble the set.

Tait Towers' attention to detail ensures that a crew of 30 local craftsman, who have never seen the stage before, can put everything together. (Images courtesy of Tait Towers.)

Over the years, the designers at Tait Towers have developed a library of 3D parts that they can pull from as they develop their models. The stage platforms themselves can be drawn in 2D and then extruded, and other 3D components can be sketched and then lofted or swept along a path. These separate 3D parts can be combined using a Boolean union or subtract to create more complex solid forms.

Occasionally, the designers shift to other Autodesk software. For example, Kicera notes that it's easier to flatten sheet metal parts using Autodesk Inventor than with AutoCAD, and sometimes they enlist 3ds Max Design to create animations to show how various stage components will function during a performance. But Kicera estimates that 95% of the work is done in AutoCAD.

Kicera's designation as design director belies the fact that he's just 26 years old. He started using AutoCAD in 2002 as an architecture student at Pratt Institute in New York, but before joining Tait Towers, he had worked only in 2D. "I thought I knew what AutoCAD could do," said Kicera. "Then I started working here and it completely blew me away. It opened my eyes to a completely different world and a different side of AutoCAD that I had never seen or used before." In the span of a week, he was modeling in 3D, and since the time Kicera joined the company, Tait Towers' design department has grown from 6 to 27 people. 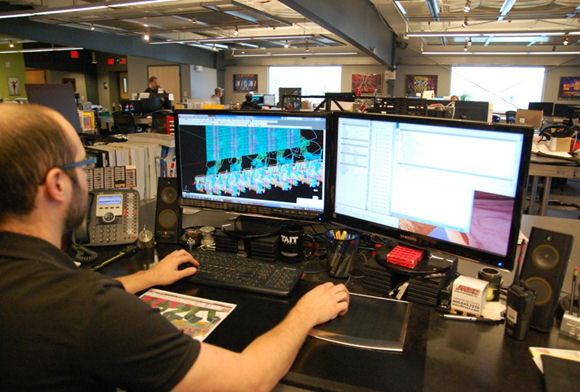 Tyler Kicera had never worked in 3D in AutoCAD before joining Tait Towers in 2008. Within a week, he was modeling in 3D, and his design team has grown from 6 to 27 people. (Image courtesy of Tait Towers.)

Although Tait Towers had been using AutoCAD for years and typically upgraded each year, it stayed with AutoCAD 2007 through three subsequent releases, primarily because the company had developed a lot of custom software for managing its CNC operations. Much of that software had to be rewritten before the company could upgrade to a newer release. Tait Towers has moved on to AutoCAD 2011 and has benefited from many of the new features. In particular, the ability to control transparency by object or by layer has enabled designers to better visualize complex designs. According to Kicera, "This has been crucial in helping us see details buried within complex geometry." The company plans to shift to AutoCAD 2012 when it becomes available.

Tait Towers' stage sets continue to become ever more complex and expensive. The set for a big show costs anywhere from $2.5 to $6 million. In addition to Bon Jovi's The Circle Tour, perhaps the most complicated set to date was built recently for Australian pop star Kylie Minogue. The stage incorporates a dozen water pumps and tanks with machines that are submerged in pools of water. The company also designed and built the elaborate stage for Roger Waters' The Wall Live concert tour, which recently completed the North American leg of 56 performances (grossing more than $89 million) and now moves to Europe for another 60 shows. 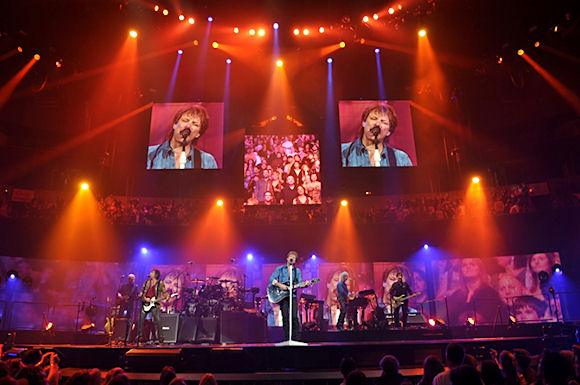 Spectacular stage sets for a major touring concert can cost millions of dollars and must be assembled more than 100 times as the band travels from town to town. (Image courtesy of Tait Towers.)

"We're in the spectacular business," said Adam David, Tait Towers' vice-president, "which is a great business to be in." And the company's reputation speaks for itself. According to Kicera, 95% of business is for return customers. "We don't have to market ourselves. The product speaks for itself. If you're in the entertainment business, you know who we are."