Generate 2D Output from 3D AutoCAD Models in a Flash

Learning Curve tutorial: When you need 2D working drawings, the fastest, most accurate approach is to start in 3D.


It was a clear, sunny morning. Captain LearnCurve's son Trevor was leading the way in a brand-new 2011 Bentley SuperSport, while the Captain was following in an equally new 2011 Bentley GT Speed.

That's it! This month's topic! Speed! More particularly, the need for speed in AutoCAD.

Hold it! Back up a second! What's this about two brand-new Bentleys? Doesn't the Captain already have an '89 Bentley Turbo R to go with his '37 Rolls-Royce Phantom III?

Correct. The Captain and his gorgeous wife had driven the Bentley from Vancouver to Toronto for the Rolls-Royce Owner's Club annual meet. Their son and his wife Jenn had flown to New York for a couple of days and had then joined them in Toronto. After the meet they drove the car home while the Captain and his wife flew home. At the meet, Bentley had four demo cars available, but unfortunately a couple of their employees had called in sick, so the duo was turned loose without chaperones.

Okay, let's get back to speed in AutoCAD. Would you believe that it only took me five minutes to create this 2D working drawing? Now all we need is dimensions, center lines, and the cutting plane line, and we're done. 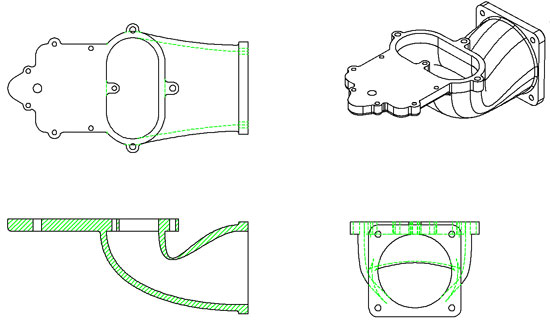 Okay, I cheated a little bit. I started from a 3D model, but it had taken less than two hours to produce the model.

You have probably all heard the line "The world is 3D (except for pizzas and roadkill); why do you still work in 2D?" The answer is that a great many applications still need 2D working drawings. Yes, the 3D printing and CNC machining processes let us go directly from art to part, but quality assurance personnel need drawings showing the critical dimensions to be checked, and so far there isn't a matter replicator big enough to produce a full-size bridge or office tower (although I believe there is one that will produce small houses).

Having said that, as the 3D tools in AutoCAD evolve, it is becoming truer and truer that the fastest way of producing 2D working drawings is to generate them from 3D solid models. A further advantage is that the resulting drawings will contain far fewer, if any, graphical errors. A 3D solid model can only exist in the computer if the real 3D solid can exist. Yes, I can model something that is prohibitively expensive or even impossible to manufacture, but it is still possible for that real solid to exist.

There have been a great many articles written extolling the virtues of designing and working in 3D, and many more on how to create and edit 3D models. I'm going to come at it from the other side: In this article I'll start from an existing 3D model and show you how easy it is to create a 2D working drawing from it. Hopefully this will convince you that 3D is indeed the way to go.

There are three ways to produce 2D output from a 3D model in AutoCAD, each with its advantages and disadvantages. We'll work through them one at a time from oldest to newest so you can see how each one works. In each case we'll use the same 3D model, which is a little simpler than my previous example. 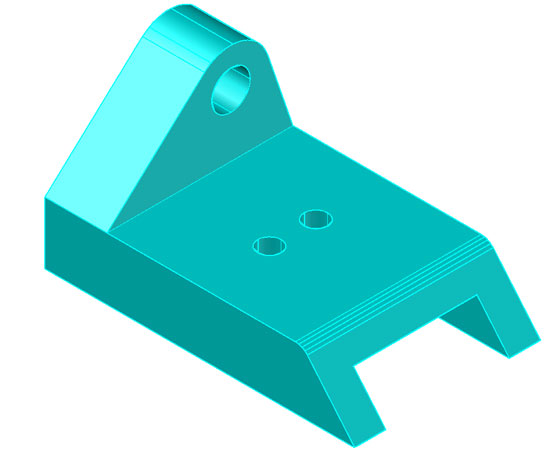 The FlatShot command is the oldest, fastest, easiest to use, and least versatile of the methods for producing 2D output from a 3D model.

Now start the FlatShot command [When in the 3D Modeling workspace, select Home | Section | Flatshot]. This brings up the dialog box below: 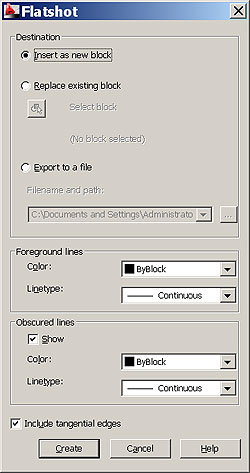 For now, let's just accept the defaults as indicated and click Create. AutoCAD churns for a brief moment, then starts issuing a series of prompts that look exactly like those from the Command-line version of the Insert command. This is no coincidence, because that is exactly what is happening. AutoCAD has projected all the edges of the model onto the XY plane of the current coordinate system (the WCS in our case), and created lines, circles, arcs, and ellipses of the edges, which it then bundles up into a block definition.

Start by selecting a suitable insertion point. Next, AutoCAD asks for X and Y scale factors, which should normally be the default value of 1, because we usually draw everything full size in AutoCAD. Finally, it asks for a rotation angle: Take the default of 0 (zero).

And here we are! The 3D part has been projected into a flat 2D view. 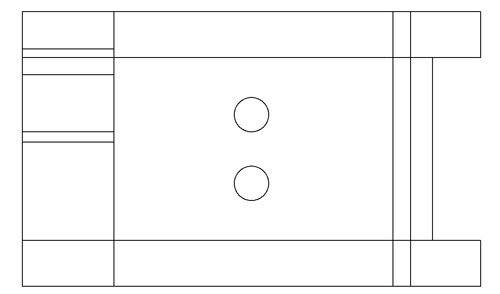 Oops, that's not quite what we expected. Why are there so many extra lines, and why doesn't it show hidden lines properly? (Don't you just hate it when a computer does exactly what you told it to do, instead of what you wanted it to do?)

Okay, let's try this again. Run the FlatShot command again, but this time go to the Obscured Lines window and set the color to Green and the line type to Hidden2. Click on the Replace existing block button and select the existing projected top view. Click Create. 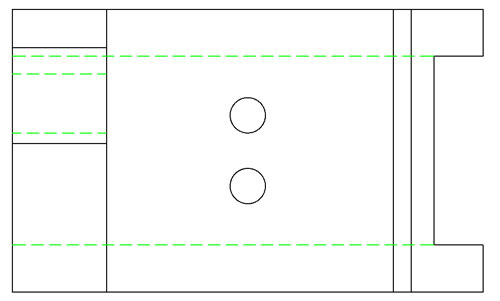 Now let's do the front view. Use the View command to change the current view to Front and run FlatShot again.

Hmm, that's interesting. Once again, AutoCAD is asking for an insertion point for a block insertion, but all we can see is what appears to be a single line. That is correct, because that's how FlatShot works, and this is a significant point. It takes the current screen view direction and projects it onto the XY plane of the current UCS.

It can be difficult to place a block insertion accurately under these conditions, so the best bet is to type in a coordinate triplet such as 0,0,0. We can always move the block later.

This time, shift the View to Right and run Flatshot one more time, again specifying a desired insertion point for the block. Now let's look at the Top view again. After a bit of re-arranging of the block insertions (the quick and easy way is to use parametric collinear constraints), we have something that looks like this: 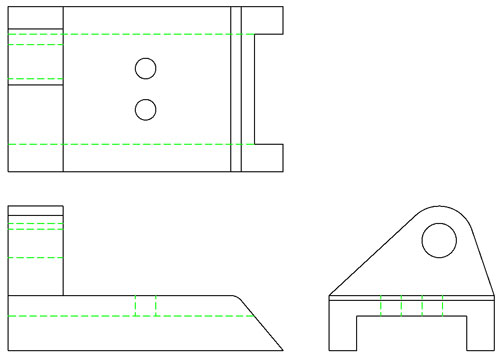 That was easy, wasn't it!

As noted earlier, FlatShot is simple, fast, and easy to use, but not too versatile.

Now for the Gnarly Bits ...

FlatShot creates a 2D view of all solids in the drawing, even if they aren't currently visible on screen. You can use BlockEdit (double-click on a block insertion) to delete any unwanted objects.

By default, all of the 3D visual styles show objects in a perspective view, which you normally don't want when creating orthographic views. You can either switch to the 2D Wireframe visual style, or you can set the Perspective system variable to 0 (zero) before running FlatShot. The setting of Perspective is saved with the drawing, so you can also set up a template this way.

All objects in the projected views are created on the layer that is current when FlatShot is run. If you specified a color and/or line type for hidden/obscured edges, then they are applied as property overrides. If desired, you can edit the blocks and use the QuickSelect button of the Properties dialog box to select them and move them to a different layer.

Now here's the big one: FlatShot will not produce cross-sections. Before the later 3D-to-2D methods came along, which we will study in future articles, we would edit the block definitions to manually (and sometimes laboriously) convert projected views into section views.

… And Some Interesting Bits

You may have noticed the Include Tangential Edges button at the bottom of the FlatShot dialog box. When it is turned on, then a line appears at any place that two faces are tangent to each other. For example, look at the right-hand side of our top view and compare it with the front view. The two tangent edges of the fillet have produced the two parallel lines in the top view. If it was off, then these two lines wouldn't appear, and there would be nothing in the top view to indicate the change in direction of the top face.

You don't have to be stuck with the long, esoteric name that AutoCAD generates when it creates 2D views. You can Rename them to something meaningful, such as Top, Front, and so on.

So what happens if you make changes to the original 3D solid model? No problem. Just run FlatShot again, but this time select Replace Existing Block in the Destination window of the FlatShot dialog box. Select the appropriate block (here is where renaming comes in handy), and everything updates.

How about isometric views? Not a problem, but they can be slightly confusing the first time you produce one. Simply align the current screen view to an isometric orientation and run FlatShot. The problem would seem to be that what it produces doesn't look like a proper isometric view.

Ah, but don't forget that FlatShot projects onto the XY plane of the current UCS, and we are looking at this from a perspective angle. Flip back to the top view and everything is cool. This view also contains good examples of the tangent line option. 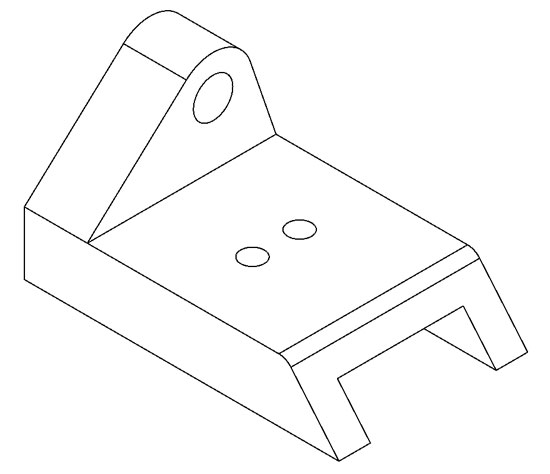 The solution is simply to ignore our usual rule about drawing and inserting at full size. When inserting an isometric projection, use a scale factor of approximately 1.2247441227836356744839797834917 and you will get an isometric view. You can also edit the insertion later to make it match this scale factor.

Get Out of Here!

There is one final button on the FlatShot dialog box that can be useful. Click on the Export to a file button. You can now browse to a folder location and assign a file name. The resulting extracted view gets written out to a new drawing file. If you create multiple views then they each need their own file, but you can easily Insert them back into a master drawing to create your final multi-view drawing.

This capability has two major uses: First, you can extract and send 2D working drawings to clients, customers, and vendors without having to send the basic design information contained in your 3D model.

The other procedure is to build the 3D model, extract the 2D drawing views, and go home for three days. Now come back and submit the drawing to your boss, who will be very impressed with the fact that you managed to create such a complex drawing, including the isometric view, in only three days ...

Be sure to come back next time, when we will look at more powerful (but more complex) ways of creating 2D output from 3D solid models.

…And Now for Something Completely Different

Always check your units of measure. The Captain and his son both suddenly realized that the cars they were in had Michigan plates, and so the speedometers were in miles, not kilometers. They weren't doing 125 kilometers per hour in a 100 zone; they were doing 125 miles per hour … oops. These cars will do over 200 mph, but are so smooth and quiet that the Captain and his son hadn't realized how fast they were going until they passed another car.