New Tricks for an Old DOS

Learning Curve: Sometimes, you can do things with an old-fashioned DOS command prompt that Windows can’t do at all.


It was a warm and sunny afternoon. Captain LearnCurve’s son Trevor was visiting from Adelaide, Australia, where he and his wife Jenn are currently living. While driving the ski boat, Trevor captured some images of the Captain waterskiing. 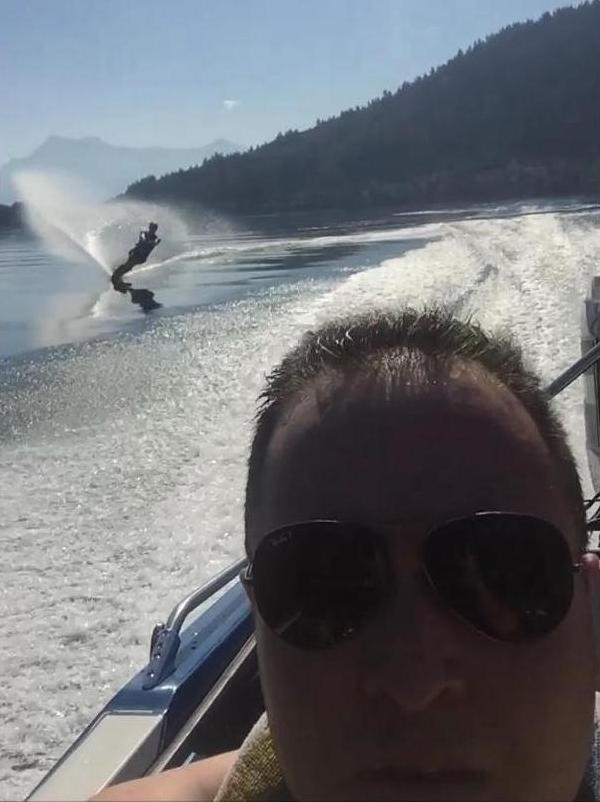 Captain LearnCurve’s son Trevor provided this caption: “Selfie with Dad. He’s the one on the end of the rope. He’s 72.”


That’s it! The topic for this article!

For all the cool things that Windows can do (such as sucking up system resources, multitasking so minor programs can keep bugging you regularly to install the latest update when you’re trying to do useful work with a major program, crashing at the worst possible time, and so on), there are times when an old-fashioned disk operating system (DOS) command prompt can perform better than Windows. In fact, as you’ll see if you read on, there are things that can be done using the DOS prompt (also known as the system command prompt) that Windows can’t do at all.

Here’s an example: Suppose you’re working on a very large project, which involves several thousand drawings in a multibranch folder structure that is several layers deep. Mixed in are several thousand Word documents, Excel spreadsheets, and raster images in a variety of file formats.

Your boss comes out of her office to announce, “The client and I are going out for lunch. When we come back, he wants a copy of all the AutoCAD drawings for the project that are new or have been revised since a week ago Tuesday, maintaining the original folder structure. Oh, and be sure to include a printout of all the file names. Thanks.” Most people’s first reaction is that this could take hours, or even days! By the time they get their coats on, however, you meet them at the door with the printout and a USB flash drive containing the desired files. “Join us for lunch?” invites the surprised client.

Impossible? No, not if you use the system command prompt.

To start, plug an empty USB flash drive into your computer. Use Windows Explorer, and note its drive letter under My Computer. Now click the Windows Start button, then All Programs > Accessories > Command Prompt.

This brings up a good old DOS screen, as shown below. For you kiddies in the room, this was the main screen for all computers that ran DOS before Windows came along. Back in the day, you launched an application such as AutoCAD by entering its name (ACAD.EXE) at the system command prompt.

The black screen of DOS, showing the system command prompt.


By default, you are now in your My Documents folder. Assuming your USB drive is drive E: simply enter the following at the system command prompt:

Now watch in shock and awe as the desired files are automatically found and copied to your USB drive, while I explain what’s happening:

By the time you finish reading the previous explanations the job will probably be done, and you can get working on the printout of file names.

Put That in Your Pipe and Print It

In a previous article, “Seek and Ye Shall Find: Quickly Locate AutoCAD Files That Contain Specific Entities,” I showed how to use the system DIR command to obtain a directory listing of selected files and folders. That article also showed how to redirect the DIR command’s output and pipe it to a simple text file instead of to the screen. We then edited that file to turn it into an AutoCAD script that batch-processed a number of files.

Ah, but it gets better! You can redirect the output of almost any system command. For example,

produces the text file listing directly, without having to go through the DIR command. You won’t see anything happening on screen, but when XCopy is finished you can open the target TXT file using Notepad to see the results. Print it, and while you’re at it why not also copy it to the USB drive as a bonus for the client? With that, you’re ready to go for lunch.

Okay, now that you’ve enjoyed a nice lunch break, let’s look at the options available for the XCopy command. Enter the command and option

to bring up a listing of all 26 options, as shown below. 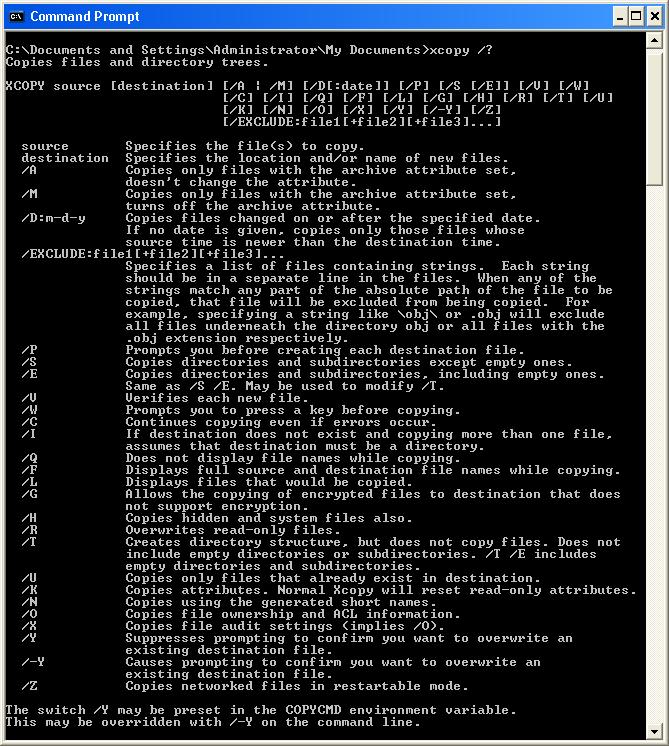 The XCopy command has 26 options!


The good news is that most are quite esoteric and rarely used, so I’ll just touch on the ones that you are most likely to use.

Now here are a couple of options you probably don’t want to use, because they can be misleading.

Oops, you made a small error and XCOPY is busy dumping your entire hard drive to your cloud file-storage account. No problem, just hit your Escape key. Hey, what’s wrong? XCOPY won’t quit! Yes, early computers used Telex or Teletype keyboards that didn’t have an Escape key. The system command prompt continues this tradition, so you need to press Ctrl+C to cancel any command in progress.

You’ve certainly made an interesting case for using the system commands!

Speaking of case, none of the commands, paths, or options are case-sensitive, and the /options are not order-sensitive.

And Now for Something Completely Different

It’s actually quite simple to remove the sunroof panel from a 1937 Rolls-Royce Phantom III. The panel slides on two rails, each held down by four screws, but with the panel fully open only the front three screws are visible. No problem; simply remove the visible screws. The rails will now straighten up away from the curve of the roof and the panel will easily slide forward and off.