A Peek at the Future of AutoCAD

CAD Manager Column: Autodesk’s technology preview event provides clues about whether the long-lived application will continue, and if so, how it will develop.


Last week, I attended an Autodesk technology day to learn about the future path of AutoCAD software. The AutoCAD Influencer’s Day was attended by a variety of bloggers and technical experts from North and South America.

I had no preconceived notions of what we would cover, other than knowing we would look at AutoCAD 2018, due to be released this week. And while the new version of AutoCAD was somewhat limited in new features (more on this later), there were several pieces of information relevant to CAD managers, which we’ll look at in this column. Here goes.

AutoCAD’s Viability in the Cloud Era

After a tour of the facilities, we settled into a conference room where Rob Maguire, AutoCAD product line director, gave an overview of AutoCAD’s development status. The principal topics of conversation were the new release (more on that in the next section) and the increasing attention being paid to making new version migrations less painful by employing better automated upgrade tools. Clearly, Autodesk hears CAD managers’ continuing requests for better version management. Only time (and experience with newer AutoCAD versions) will tell whether the new tools are useful, but at least the company is making an effort to improve on existing tools.

A recurring theme in Mr. Maguire’s slides was the interoperability and cross-platform communication between various DWG-based tools. From sharing secure views, to web-based tools, to support for a variety of Windows, Apple, and Android devices, it’s clear that Autodesk envisions pushing geometry created by AutoCAD to everyone, no matter what type of device they carry.

There was also a session called “AutoCAD Futures,” in which specific details were divulged that I’m not at liberty to disclose yet. Without violating non-disclosure rules, I can say that AutoCAD is not going away and will, in fact, be undergoing substantial development. When asked directly whether there would be any movement away from the traditional desktop AutoCAD versions, Mr. Maguire stated, “The desktop version isn’t going anywhere.” So, contrary to some speculation I've read, the presence of AutoCAD 360, A360, and AutoCAD Mobile do not indicate the death of conventional AutoCAD.

After Mr. Maguire’s presentation, we were given a demo of AutoCAD 2018 by Heidi Hewett, AutoCAD’s technical marketing manager. I would categorize 2018 as a “spit, polish, and patch” release that enhances existing functions and graphics performance, rather than introducing many new features. To see a complete list of the new feature set, check out Ms. Hewett’s AutoCAD 2018 Preview Guide.

There are a few enhancements that are of interest to CAD managers, which I’ll briefly cover. These include:

DWG file format update. After five years of stability, AutoCAD’s DWG format has finally been updated. The upside is that DWG files become slightly more compact, save and load more quickly, and use a new AutoSave format that saves incrementally for fewer noticeable interruptions of workflows. The downside is that after all these years of not worrying about it, CAD managers must now remember to keep track of DWG file versions!

4K user interface update. If you’ve tried running an older version of AutoCAD on 4K resolution monitors, you’ve probably encountered the unreadably tiny toolbar and ribbon elements that come up by default. Even when switching to the large button display mode, the older version’s user interface elements can still seem illegible, particularly on laptop displays or small desktop monitors. AutoCAD 2018 — and the 2017.1 patch — have this problem solved, as you can see here: 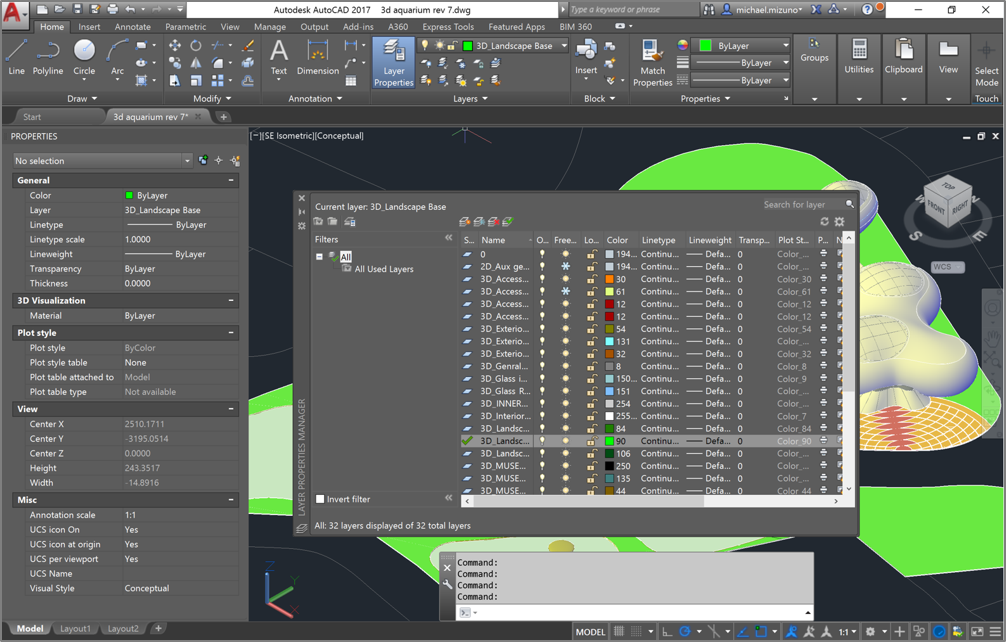 And since 4K monitors display geometry so much more sharply with anti-aliasing/smoothing, which consumes substantial graphics processing resources from your video card, a separate control has been created so high-quality graphics can still be used without 2D line smoothing. 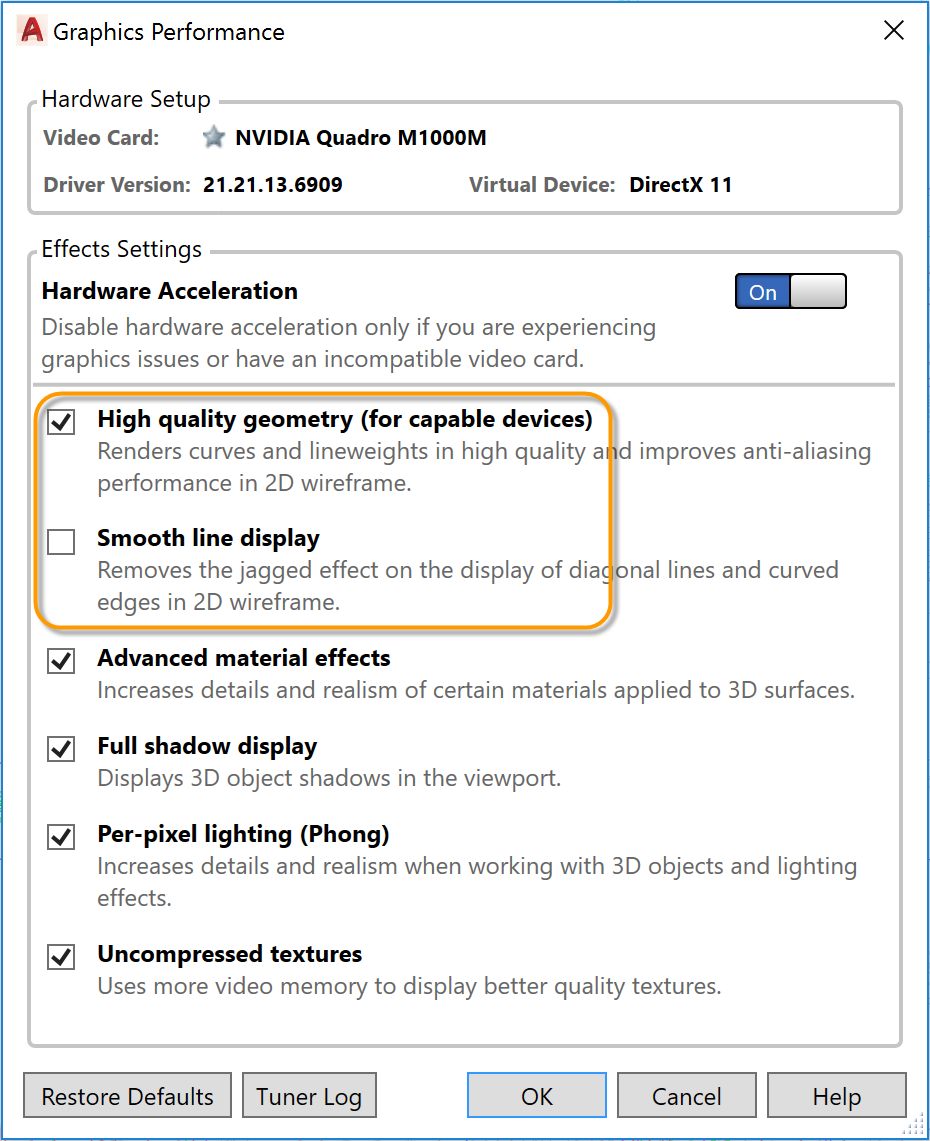 Control for quality and smooth line displays have been separated, so 4K users who don't require line smoothing can turn it off.

Xref pathing enhancements. The Achilles’ heel of AutoCAD xref management has always been getting correct pathing for the various files set and resolved. Two of the big problems are that all the files had to be saved before any pathing could be resolved, and that using absolute or relative paths could mean resolving xrefs after moving files to another drive or pathing structure could be very problematic.

Long story short, AutoCAD 2018 now allows users to set up all pathing before all the drawings are saved, by selecting correct pathing locations. And upon opening a drawing where xref paths can’t be resolved, it is much easier to reset the path then apply that new path to other unresolved xref files en masse. Whenever in doubt, the new xref path handling defaults to relative pathing (which is what most companies use, in my experience) so there are fewer clicks and picks.

Select new path can now be selected on unresolved xrefs and then applied to any other unresolved files in one step, even if the host drawing has not yet been saved.

Many companies that still use SHX text fonts for consistency and backward compatibility will applaud this functionality, and the more compact file sizes that result are always welcome.

SHX fonts on import as geometry can now be converted to AutoCAD text.

Without getting too far away from AutoCAD functionality, the two topics that were conspicuously absent from the discussion were Autodesk’s business plan change from perpetual to subscription (rental) licensing and how license manager changes would be made to hopefully simplify the process of managing mixed perpetual/rental software environments.

I do understand that the AutoCAD development staff doesn’t set these types of policies, but I was hoping for at least a little coverage of these issues, particularly on the specifics of the licensing technology.

While many of us work in environments where 3D tools such as Inventor, SolidWorks, Revit, or InRoads mean we don’t use AutoCAD much, the fact is there’s still a lot of AutoCAD out there and, as Mr. Maguire said, “The (AutoCAD) desktop version isn’t going anywhere.”

So, even if you don’t use AutoCAD on a day-to-day basis, the fact is you probably manage users who do, you export/import AutoCAD files, or you deal with contractors/consultants who use AutoCAD. Either way, it pays to stay informed about AutoCAD’s gradual evolution into a more web-enabled tool. I hope this edition of the newsletter has helped with that goal. Until next time.