How to painlessly send someone else a drawing file that contains attached xrefs.


It was a clear, cold afternoon. In fact, it was a record cold day for the date in Captain LearnCurve's home town of Vancouver. To compound the issue, he was standing at the top of the Dave Murray Downhill course on Whistler Mountain, site of the 2010 Winter Olympic games, where it was -27C (-17F). This did not include the wind chill factor from a 38Km/h (24mph, or 63,469 furlongs/fortnight) breeze. Fortunately, the Captain was suitably bundled up against the cold.

That's it! This month's topic: bundled!

My last three columns have covered the topic of externally referenced (xref) files and how they can be used to link a series of drawings together. Two common applications occur in the architectural field and in machine design, for example.

Similarly, an assembly drawing of a machine can consist of a number of xrefs to the individual component parts. Revisions to the parts will show up in the assembly drawing.

As indicated in the previous columns, however, this capability comes with a bit of a price. Specifically, care must be taken with file management. If a file is moved or renamed, the host won't be able to find it. This can be compounded by the fact that an xref file can in turn contain other xrefs. A gearbox referenced into a machine can in turn contain xrefs to the gears, bearings, shafts, casing, and so on.

Assuming you are maintaining good file control procedures, you can still run into trouble. Let's assume you now need to send the master drawing to a client, a contractor, a vendor, the fabrication shop, or whoever.

Are you sure you got all the xrefs? How about the nested ones? And the ones nested in them? And how about the sneaky bits? If your master drawing or any of the xrefs or sub-xrefs contain raster images or custom fonts, then those definition files have to be sent as well, along with plotter configuration files and plot style tables, which may be different for different attached xref files… my brain hurts.

The master drawing for a high-rise building or for a complex machine could easily need dozens or even hundreds of support files. Worse yet, the person sending the master drawing probably did not even create it, and almost certainly did not create all the support and nested sub- and sub-sub-files.

This could get quite messy, but fortunately there is a solution. Hey, there must be a solution. Think about it; would I bring up a problem if I didn't already have the solution?

And the Answer Is
In the current case of wild xrefs, the solution is AutoCAD's eTransmit command. With it you can quickly and easily bundle everything up into one neat little ZIP file package ready for e-mailing. The only thing missing is the ribbon to put a pretty bow on top of it.

Start by opening a master file that contains xrefs, or create one.

Now start the eTransmit command (File | eTransmit). This brings up the Create Transmittal dialog box below. 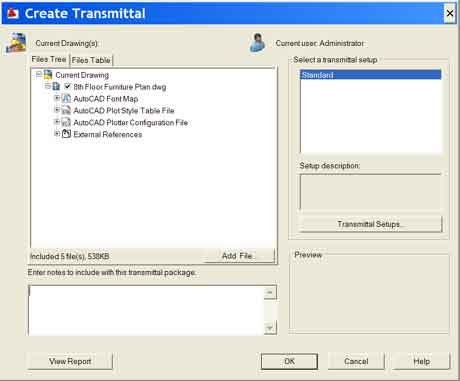 The default Files Tree tab shows the structure of the files in a tree form, while the Files Table tab displays them in a spreadsheet format. My personal preference is for the Files Tree, because it helps me to visualize the hierarchy when an xref contains nested xrefs.

As mentioned earlier, the Current Drawings window shows the font and plot files associated with the master drawing, plus any linked xrefs.

As you might expect, you can click on the + sign beside each entry to expand it out so you can see its contents. In particular, you can expand the External References entry to see any attached xrefs and any support files that they may require, and so on down through the structure of nested xrefs, raster images, and so on, to any depth.

Click OK. AutoCAD displays a standard file dialog box and offers the name of the master drawing plus the word "Standard" appended to it as the default ZIP file name. You can accept this name or change it as desired. Click Save when you have a suitable file name.

The View Report button opens this report file so you can review it before the transmittal is created. The resulting View Transmittal Report dialog box includes a Save As button so you can keep a local copy of it for your records.

Do you see what I meant earlier? Utter simplicity! Simply open a master file and run eTransmit. Done! One compact file that contains all the required xref and support files.

Details, Details
Now let's go back and look at some of the details in the Create Transmittal dialog box.

First, note that when you expand an item in the Files Tree, a check box appears before each item. If you click a check mark to turn it off, that item will not be included in the eTransmittal bundle. For example, you may be sending a bundle back to a client and they already have copies of the xref for their standard title block, which in turn contains a raster image file of their corporate logo. There is no need to send their own files back to them, so you can have eTransmit omit them.

Next, note the Add File button near the lower left corner of the Files window. With it, you can add additional files to the bundle, and these files do not even need to be open when you add them. Once again eTransmit will search for and include the required support files. Note that it is smart enough to omit duplicate files. If two drawings each contain the same title block drawing as an xref then the title block drawing is only included once. 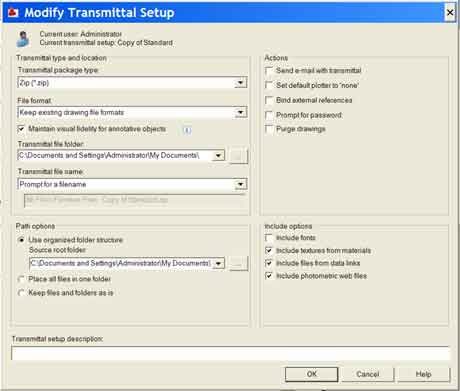 The Modify Transmittal Setup dialog box is used to change the settings of the default setup or to create new, specialized ones.

Most of the options are pretty obvious, but a few are worthy of special attention.

The Transmittal Package Type drop list defaults to ZIP, but other choices include to copy everything intact to a new folder, or to create a self-extracting archive. The former option can be very useful for moving a completed set of project files from your local drive to a network server, and the latter case is rarely used these days because most virus filters will reject an EXE file attached to an e-mail.

The File Format drop list can be used to have eTransmit automatically convert all files into one of several earlier formats, in case the recipient is running an earlier release of AutoCAD than you are.

The default ZIP file name appends the name of the transmittal setup to the base drawing name. That is where the word Standard came from in our earlier example.

The rest of the options in this dialog box are pretty obvious. Through it you can create different configurations to suit different recipients, such as different clients who are using earlier AutoCAD releases different from each other.

Finally, there is one more important piece of functionality available in eTransmit. Now if I were a low-class, low-brow writer, I would use a heading such as

Sheets Happen
But obviously I'm not, so I won't. Anyway, the bottom line is that eTransmit also works with sheet sets. If you start from or add a sheet set then it will find and bundle up all the required drawings, xrefs, and support files that are needed for the complete sheet set.

As we have seen, eTransmit is a simple, powerful tool that can pretty much eliminate the pain of sending drawings that contain xrefs or other support files.

And Now for Something Completely Different
Once upon a time, the executives of a large corporation were holding a meeting. At this meeting, someone said "I know! Let's string a cable car from the top of one mountain to the top of the next!"

And so it came to pass that the Peak2Peak gondola was built, connecting the top of Whistler to the top of Blackcomb. It stretches 2.73 miles and has only four towers. The longest span between towers is 1.88 miles, making it the longest in the world. At the high point it is 1420 feet above the ground. You may want to wait for one of the silver cars instead of the usual red ones; the silver cars have glass bottoms.