Annual user conference delivers plenty of news for the manufacturing community, including a surprise announcement from the company that once denounced product lifecycle management.


At Autodesk University 2011 in Las Vegas, Nevada, last week, Autodesk officially abandoned its stance that it wouldn't offer a product lifecycle management (PLM) solution because it didn't see the need in the market and announced its plans to launch 360 Nexus, a highly configurable, affordable, cloud-based PLM solution.

Before a gathering of CAD industry media and analysts, Stephen Bodnar, vice-president of PLM and data management, said, “Autodesk is now officially entering PLM,” but promised that it was an approach that is completely different from what we know as PLM today. 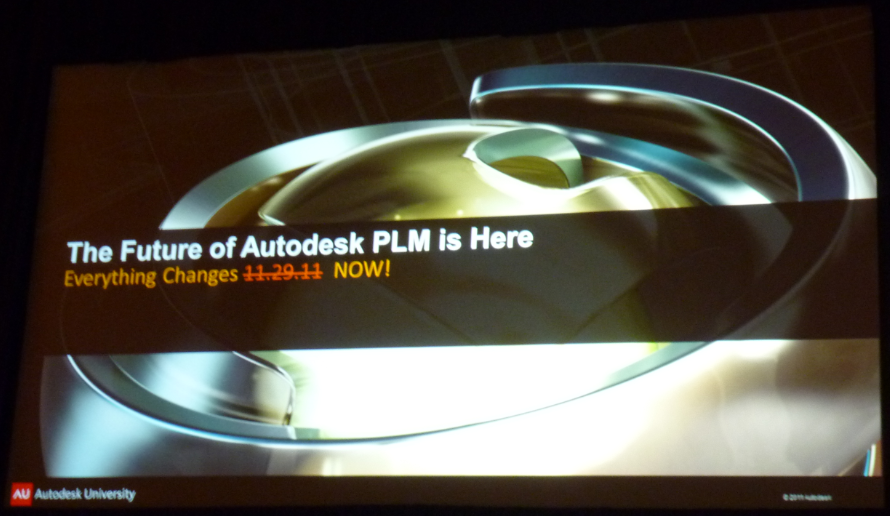 "What's different, and why now?" Bodnar asked. "It's pretty clear that our customers recognize that there's value in PLM," he explained, but the barrier to PLM adoption has been that the technology and predominant business models in the marketplace haven't really allowed customers to get that value. They've been waiting for the right solution to come along, he said.

360 Nexus, Autodesk claims, is the answer. Written from the ground up as a cloud-based platform, it is designed for companies of all sizes to use in conjunction with the on-site Autodesk Vault product data management (PDM) solution and cloud-based Autodesk Buzzsaw for collaboration with outside partners and suppliers — collectively called Autodesk 360 Nexus for PLM. 360 Nexus builds on CAD and extends beyond PDM but stops short of encompassing CAM/CAE.

Autodesk designed 360 Nexus to address the primary nonstarters it identified through a survey of 300 customers and noncustomers:

360 Nexus is expected to be generally available by subscription early next year, according to Autodesk. The cost is yet to be determined, but Bodnar explained that it typically costs $6 million to implement a traditional PLM system across a 200-person environment and "a cloud-based solution would be about one-tenth of that cost." Customers who haven't been able to even begin thinking about PLM will now find it within reach, Bodnar added. "This is true, attainable value for PLM."

Users can be up and running "in days if not minutes, rather than months if not years, if ever," can configure the system to support business processes and standards already in place, and can use it in conjunction with virtually any existing CAD and PLM solutions.

Users also will be able to access 360 Nexus on any platform, using any browser and any hardware device, Autodesk reported. The "instant-on" service — that is, it comes with preinstalled applications that can go to work as soon as a subscription is activated — can be modified or configured from scratch based on unique processes.

360 Nexus will include functionality to manage new product development; projects, programs, and processes; quality and compliance; supplier/partner collaboration; product maintenance and service; and other PLM challenges.

Brian Roepke, director of PLM for Autodesk, said it's very easy to build a process or structure inside 360 Nexus according to what you need to do. Using point, click, and drag-and-drop steps, users can build their own platforms for various tasks. "[You can] build out literally any process you can think of, establishing steps in your product-development process."

The 360 Nexus announcement wrapped up with some pokes at competition in the PLM market. Buzz Kross, senior vice-president of the Manufacturing Industry Group, said providers of traditional PLM solutions "don't want a price point at our level," and CEO Carl Bass added that "a real, deep understanding of what customers need is often lacking" in PLM and CAD developers, and he called attention to the reputation of traditional PLM for requiring a long implementation process. "Ours is designed to be quick and easy," he said.

Inventor Fusion — for the Mac!

Yes, that's right. At the Autodesk Media Day preceding AU 2011, Autodesk Senior Product Manager Kevin Schneider unveiled the newest twist to Inventor Fusion, the company's free direct-modeling technology: a full-fledged, built-from-scratch, native application for the OS platform. Available in early 2012, Inventor Fusion for Mac will break new ground in the direct-modeling arena by introducing "smart assembly design that invokes real mechanical terms with real kinematic behaviors," Schneider said. The solution will connect directly to the cloud for data sharing as if it were running on a local computer, and the user interface will get a Mac-like makeover.

It hasn't gone unnoticed by Autodesk that Mac is the platform of choice for many if not most of today's students — who are also tomorrow's customers. "The next generation of users will need choices in terms of platforms, and we need to offer apps in a variety of platforms such as OS," Schneider said.

Scott Reese, senior director of the Autodesk Simulation Team, talked to the assembled media about the company's latest iPad app, Autodesk ForceEffect. The free engineering app analyzes design concepts in the field or in the office, quickly simulating design options to help gauge their viability. Reese explained how users can use the app to sketch over a photograph of an object (such as mountain bike) to create a rudimentary model, then run analyses on the sketch by applying force to different areas of the design.

Reach Out and Touch Your Model

Infinite Z announced the formal launch of the company and its flagship product, zSpace, a 3D visualization solution that enables designers and engineers to manipulate models in a way never before possible. The zSpace platform is immediately available to early access beta customers as a standalone product now supporting Autodesk Maya and Autodesk Showcase software. It will be generally available in the first half of 2012, the company reports.

Using a proprietary stereoscopic display, trackable eyewear, a new type of direct-interaction stylus, and an innovative software platform, zSpace presents objects as a solid in open space in full color and high resolution, and those objects can be directly manipulated with the stylus as if they were physical objects. For example, users can rotate models to view the back side of a design, move and examine assembly components, or use a virtual camera tool to closely inspect a model.

The technology supports workflows in a variety of fields but is especially useful for conceptual work because of its enhanced visualization capabilities, the company reports, as well as piping and routing applications, freeform surfacing, and assembly and component work in mechanical CAD applications where it facilitates locating, viewing, and working with complex components.

Locate That Needle in a Haystack of Data

In the exhibit hall at AU 2011, newcomer Alcove9 introduced its flagship product by the same name. Alcove9 Application Connectors are available for AutoCAD, Autodesk Vault products, and a variety of other CAD and PLM solutions. Subscription pricing is based on an a la carte selection of only the components that a company requires.