Software and hardware launches and updates, plus new partnerships, are shared by Autodesk and other exhibitors at the annual user conference.


Autodesk University 2017 in Las Vegas earlier this month brought several noteworthy product announcements from exhibitors at the annual user conference. And although it didn’t say much about core products such as AutoCAD, Revit, or Inventor, Autodesk did announce numerous technology updates and noteworthy partnerships.

Autodesk Generative Design (AGD) isn’t new — it launched commercially in June, as reported by Cadalyst, after a few years in research as Project Dreamcatcher — but Autodesk announced an update at AU, and the event was abuzz with references to the technology.

AGD is now available as tech preview to Fusion 360 Ultimate subscribers in addition to Netfabb Ultimate subscribers who have had access since June. The company intends to increase access to even more customers “in the future,” it reports. Several recent technical updates include a new comparison feature that allows users to select and view multiple design options in a tiled layout, and improved project management functionality.

AGD works by taking design goals set by the user, such as size, weight, strength, style, materials, and cost, and drawing on cloud computing to rapidly generate hundreds or even thousands of high-performing design alternatives. It uses algorithms based on machine learning and advanced simulation technologies, mimicking nature’s evolutionary approach to design and going beyond topology or lattice optimization to explore functional and manufacturing design options as well. The designer or engineer determines the best design option and downloads it to CAD for editing.

Generative design reportedly leads to major reductions in cost, development time, material consumption, and product weight. The current focus of AGD is on additive (3D printing) as the method of manufacture, but the software will eventually support additional manufacturing technologies such as CNC, casting, and injection molding, Autodesk reported in June. The software will “evolve very quickly … we’re talking about a period of 18 months to two years,” predicted Greg Fallon, vice-president of simulation, at that time.

In a small media Q&A session with Jeff Kowalski during AU 2017, I asked the Autodesk CTO how his company’s generative design technology differs from Bentley Systems’ GenerativeComponents computational design software for infrastructure design, which originated about a decade ago. He explained that while Bentley’s technology generates variations on a fleshed-out design, AGD “explores ideation. ... You start from scratch, and the computer draws on nature to generate ideas without [being given] a starting point.” (Other, similar technologies include Inspire 2017 from SolidThinking and the generative design functionality introduced this spring in Solid Edge ST10 by Siemens PLM Software. Autodesk’s Dynamo Studio is a standalone programming environment for computational building information modeling (BIM) that enables designers to create visual logic to explore parametric conceptual designs and automate tasks.)

Autodesk Generative Design has applications for AEC as well. Dutch builder Van Wijnen is pioneering use of the technology to optimize neighborhood design as part of a larger, technology-driven effort to dramatically reduce project costs by 50% and timelines by 15%. The firm creates neighborhood layouts by feeding the computer its modular home and apartment designs as the constraints and setting goals for solar energy potential, backyard size, views, and project costs and profits. The software generates numerous options that meet the criteria, then a human designer narrows the options to one. “We think this technology will change the way we design forever,” said Hilbrand Katsma, Van Wijnen COO.

Generative design also was used to develop Autodesk’s new office and research space in Toronto as well as the exhibit hall layout for AU 2017.

Autodesk AnyCAD, another tech preview, has been extended to Autodesk Fusion 360, the cloud-based 3D modeling solution available to Autodesk Product Design & Manufacturing Collection subscribers. Originally available for Autodesk Inventor, AnyCAD allows virtually any CAD data, regardless of source, to be associatively integrated into designs without the need for file translation. Data can move bidirectionally between Fusion 360 and Inventor.

The AnyCAD preview in Fusion 360 allows users to maintain full associativity with Inventor and SOLIDWORKS data. Additional file formats coming soon include PTC Creo, NX from Siemens PLM Software, and other nonnative data types such as IGES and STEP.

Autodesk previewed the next generation of its BIM 360 platform, a cloud service designed to connect the entire construction project lifecycle, from design to ownership. A BIM 360 mobile app supports quality and safety checklist workflows and provides access to all project plans, models, and documentation. The technology preview is available now as a free trial. 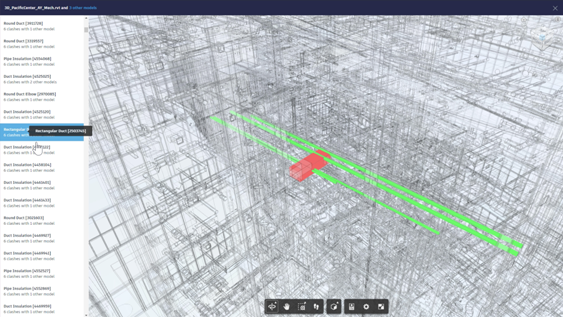 In BIM 360, clash detection is performed automatically as multi-disciplinary models are published. In the Model Coordination module, users can drill down into individual clashing objects to resolve issues in the preconstruction stage.

Fusion Production, scheduled for release in early 2018, will support remote monitoring and management of factories and shop floors from the desktop or mobile device. The newest offering in the Fusion family of cloud-based services, it will allow contract manufacturers to digitize production by combining planning, job tracking, and machine monitoring.

Autodesk announced an update to the Autodesk Forge software-development platform that reportedly makes building on Forge easier than ever before. Developers and customers of all sizes are adopting Forge to build and deploy cloud-based apps and services that complement Autodesk software–based workflows, according to Autodesk. For Autodesk customers, Forge enables an increasingly diverse set of apps available to tailor and streamline design workflows — as well as the ability to create customized tools.

Autodesk also introduced Autodesk Connect and Construct Exchange, an outlet for third-party, Forge-based tools that extend the functionality of BIM 360. More than 40 integrated apps are available now (many still in beta) for applications ranging from cost estimating and bidding to reality capture and sharing of real-time construction imagery, with several others coming soon.

In a related effort to support its vision for its next-generation BIM 360 platform — and furthering its stated commitment to supporting industrialized construction, the concept of applying technology to building much like it is used in manufacturing to reduce risk and increase profits — Autodesk announced its fourth Autodesk Forge Fund investment in a construction tech startup in five months by leading the funding round for Assemble Systems, which develops cloud tools for AutoCAD- and Autodesk Revit–based construction workflows. The program previously invested in SmartVid.io, ManufactOn, and Project Frog.

Shortly after AU 2017, Autodesk announced AutoCAD 2018 for Mac and AutoCAD LT 2018 for Mac, which add features including the ability to automatically migrates custom settings when upgrading to the new version, tools to support importing SHX text from PDF files, and user interface updates that enable tabbed palettes and auto-hide docked palettes.

Following a stretch of little-to-no activity in the geographic information systems (GIS) space — including the dissolution of its GIS division several years ago — Autodesk announced a noteworthy partnership with Esri, a leading developer of GIS software, to connect Autodesk Revit with Esri GIS mapping technologies. The effort would allow infrastructure owners to connect the intelligence in a detailed, 3D BIM model to the more granular data indexed geospatially and managed through GIS, such as data about the environment, people, and networks that weave it all together — in other words, “design in the context of the real world,” said Autodesk CEO Andrew Anagnost. Aimed to improve infrastructure planning, design, building, and operations overall while decreasing project timelines, the integration would facilitate, according to Autodesk, reductions in permitting through improved stakeholder engagement; more sustainable and resilient design through enhanced project insight; and reduced risk via improved end-to-end flow of materials, resource availability, and construction scheduling. The companies did not release a timeline for the project.

A partnership between Autodesk and Dropbox means AutoCAD users now can access DWG libraries stored in Dropbox directly from the AutoCAD desktop interface, across all devices and without storing or syncing local copies. Additionally, users can preview DWG files and view or comment on designs from remote locations from any Internet-connected device. File preview enhancements coming in 2018 (for select Dropbox subscription plans) will allow users to scroll through projects directly within Dropbox to identify, view, and comment on DWG files as well as view shared files even if they don’t have AutoCAD or Dropbox installed. (In 2015, Box introduced  similar functionality in an app for the cloud-based AutoCAD 360.) Editor’s note: The free Dropbox App for AutoCAD Desktop was available at the time of the Dropbox announcement but has since been unpublished; check back in the Autodesk App Store for updates.

Autodesk Foundationwill fund and support a new initiative of Village Capital to identify and nurture young companies harnessing automation technologies, such as artificial intelligence and robotics, to bolster dwindling workforces. The effort aims increase skills and efficiency to free up workers to engage in activities that require higher-order thinking and to augment workforces in industries experiencing labor shortages, such as care-giving and manufacturing.

Other New Software, Hardware, and Services

Exhibitors at AU 2017 took the event as an opportunity to announce new offerings to benefit Autodesk customers.

Through mid-February, LinkedIn Learning is making available 42 free courses that teach skills needed for the automation- and artificial intelligence–enabled work of the future in the building and manufacturing industries. Courses range from construction management to product design and certification prep and are available in English, Spanish, French, German, and/or Japanese.

Lenovo briefed Cadalyst about three new workstations, the ThinkStation P520 and P520c single-processor desktops and the ThinkPad P52s mobile, all scheduled to ship in late January. The two new towers promise mainstream performance at entry-level prices thanks in large part to the latest and most powerful Intel Xeon W processors, which max out at 4.5-GHz speeds and 18 cores. New dual M.2 NVMe storage implementation directly on motherboard and NVIDIA Quadro graphics (up to two NVIDIA Quadro P6000 GPUs in the P520 or one NVIDIA Quadro P5000 in the P520c) are among other noteworthy features.

The 15.6” ThinkPad P52s is Lenovo’s thinnest and lightest quad-core mobile workstation to date. The 4.3-lb unit features hot-swappable double-digit battery life, eighth-generation Intel Core processors, first-to-market NVIDIA Quadro P500 graphics, and security features including an IR camera, which registers depth for extra security; fingerprint verification and facial recognition; and the optional ThinkShutter that lets users cover the camera when not in use.

Specific pricing will be available at launch; watch Cadalyst.com for full details at that time. 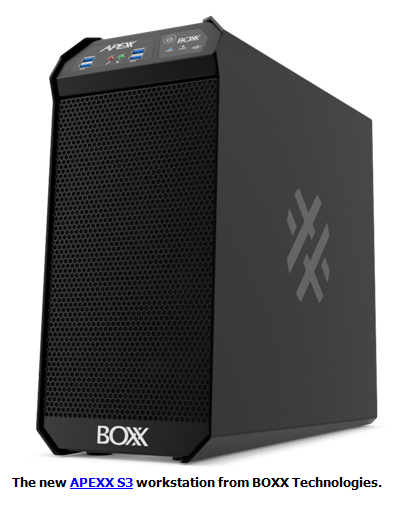 BOXX Technologies debuted the APEXX S3 workstation, featuring an overclocked version of the new, eighth-generation Intel Core i7 processor, a new APEXX workstation nomenclature based upon the Intel scalable processor platform, and a next-generation chassis. The workstation is designed to accelerate Autodesk 3ds Max, Revit, Inventor, Maya, and other demanding creative workflows, according the company.

HP introduced the DesignJet T830 multifunction printer, designed to allow architects, engineers, and construction teams to print, copy, and scan files on site as well as remotely across sites, via a single device. 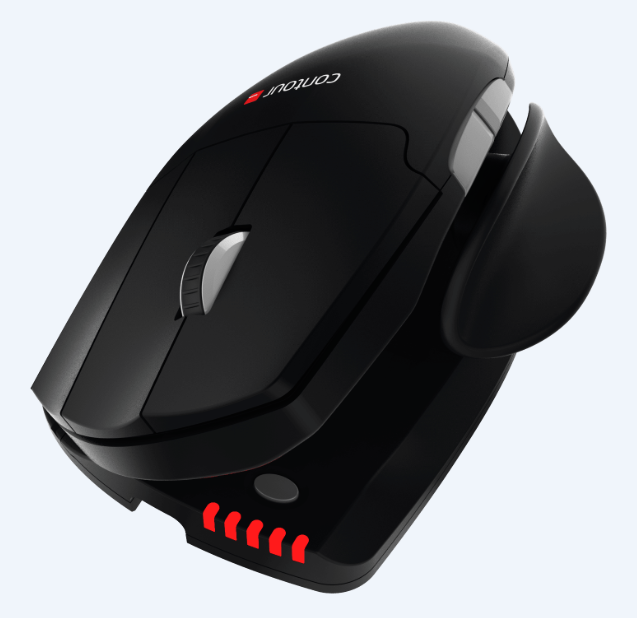 Unimouse is an adjustable ergonomic mouse from Contour Design.