Bricsys: We’re Not Holding Back on DWG, Part 1

At its user conference in Paris, the company boldly commits to continued innovation and support of the file format — and the customers that rely on it — and shares the latest BricsCAD developments to prove it.


Several years ago at an event where Autodesk was announcing software updates, I asked then-CEO Carl Bass if he could anticipate a day when we’d see robust manufacturing- and AEC-specific design tools within one 3D CAD solution. His answer was a flat no: “The necessary capabilities are too complex and discipline specific to exist side by side,” was the gist of his explanation.

Fast-forward to today, and a company by the name of Bricsys is proving otherwise — and the functionality is built entirely on the DWG file format. At the Bricsys 2017 conference in Paris last week, where the company hosted myself and several other members of the CAD media, it demonstrated inside its BricsCAD v18 Platinum 3D modeling solution the ability to modify a parametric model of an elevator within a building information model (BIM). 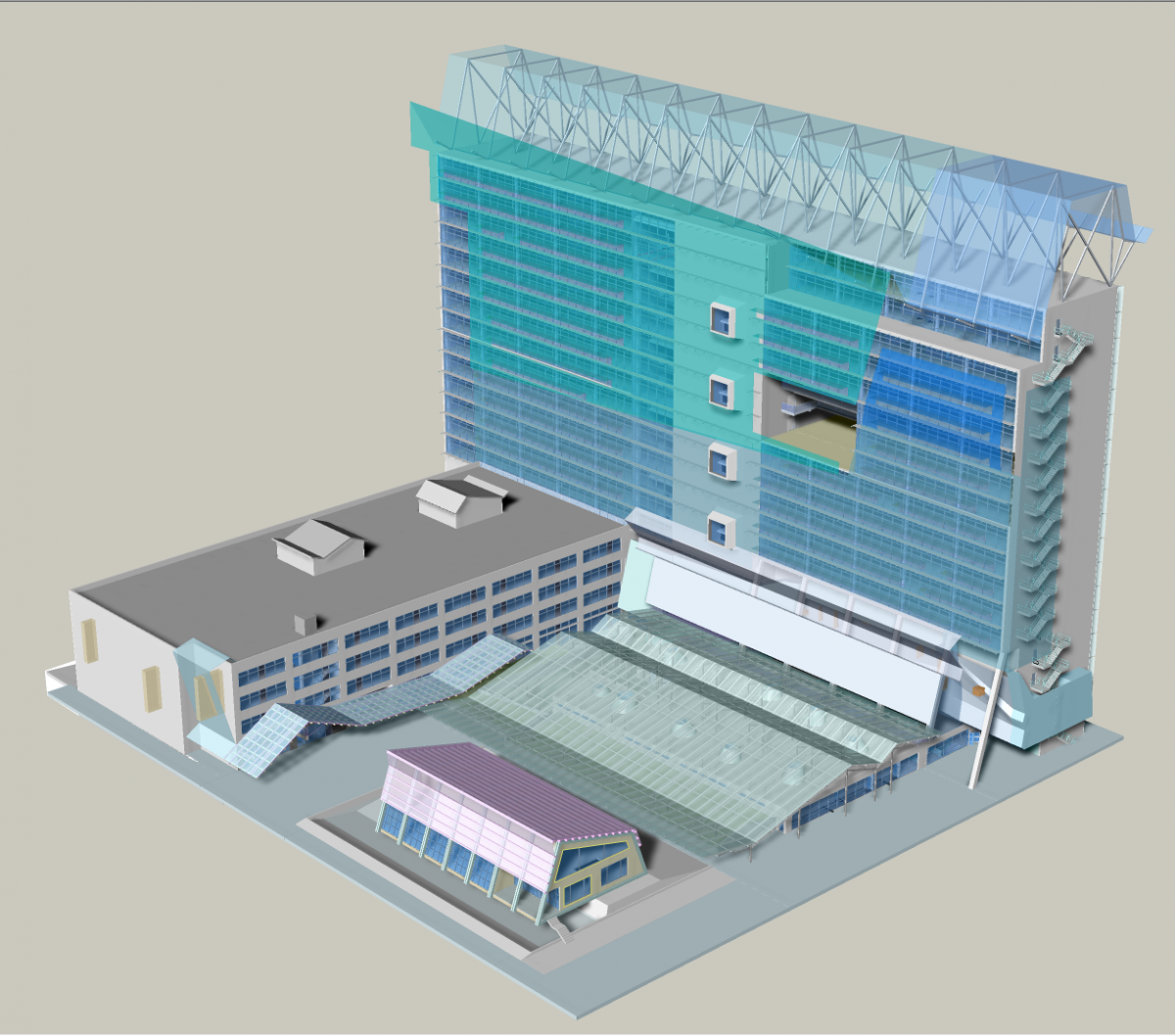 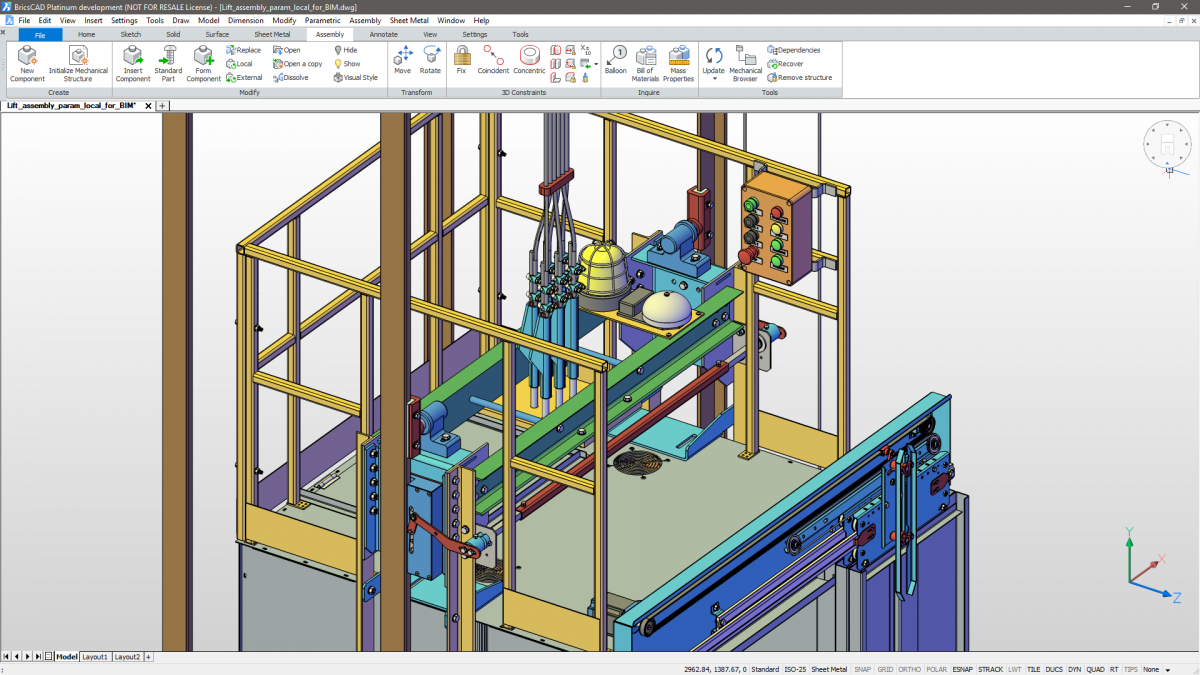 Inside BricsCAD v18 Platinum, a building information model (BIM, top) houses a full-fledged 3D model of an elevator, which the user can modify seemingly as if working directly in purpose-built mechanical modeling software.

Development is in its early stages but shows that robust, application-agnostic 3D modeling is indeed possible in a single CAD solution — something that might not be on the radar of every design and engineering group now, but will be, once organizations realize that a tool is evolving to support multi-disciplinary design and all its possible process, timeline, and bottom-line benefits. Surely just the tip of the iceberg, the development exemplifies a revolutionary concept. Don Strimbu, vice-president of communications for Bricsys and former Autodesk staffer, said, “I’ve been [involved with CAD software development] for 30 years, and this is truly innovative; there’s nothing else like it.”

The development also demonstrates Bricsys’s commitment to DWG, and not just as a marketing slogan. Company strategy is built on continuing innovation around the file format, and all software development centers on it. While software developers in general seem to be scaling back on product announcements at user conferences, Bricsys 2017 offered a full day of updates about BricsCAD v18, including new building information modeling (BIM), mechanical, and sheet metal design features; the newly dubbed Bricsys 24/7 (formerly Chapoo) for cloud-based construction project collaboration; the — drumroll, please — brand-new BricsCAD Shape, a fast and simple-to-use 2D/3D conceptual modeling tool that’s DWG-based and free for commercial use; and more.

In Part 1 of this conference report, I’ll share general announcements by Bricsys regarding its commitment to developing DWG-based technologies and details about the brand-new BricsCAD Shape. Stay tuned for Part 2, where I’ll share details about the extensive software upgrades coming to BricsCAD v18 — and keep your eyes open for the launch of an augmented reality tool, currently in beta testing.

One Model, One Technology

Erik de Keyser, Bricsys CEO, kicked off the day-long conference by sharing the vision and priorities of his Belgium-based company. “The user experience is our top priority,” he stated, outlining the software developments that support that commitment:

Extending the theme of user support, de Keyser discussed his company’s unwavering commitment to the DWG file format. “We have a lot of 2D users who have been with us for a long time. We feel we have a responsibility to continue supporting them as well as offer opportunities for growth, moving to 3D.” A giant slide on the wall behind him stated: Bricsys and ODA [Open Design Alliance] believe that DWG has a great future and push DWG as a powerful platform.

Bricsys claims that Autodesk investment in DWG is slowing as the ODA investment is growing. Neil Peterson, CEO of ODA, asked conference attendees, “With so much of the market using and continuing to adopt DWG, why is Autodesk stalling development? We see a lot of opportunity in this market, to continue developing and innovating in DWG. ... We’ve solved the problem of integration of DWG, now we are moving beyond that.”

For example, he said, “Last month, we integrated version control, something DWG users have never had. We haven’t talked about it a lot yet, but it’s here.” 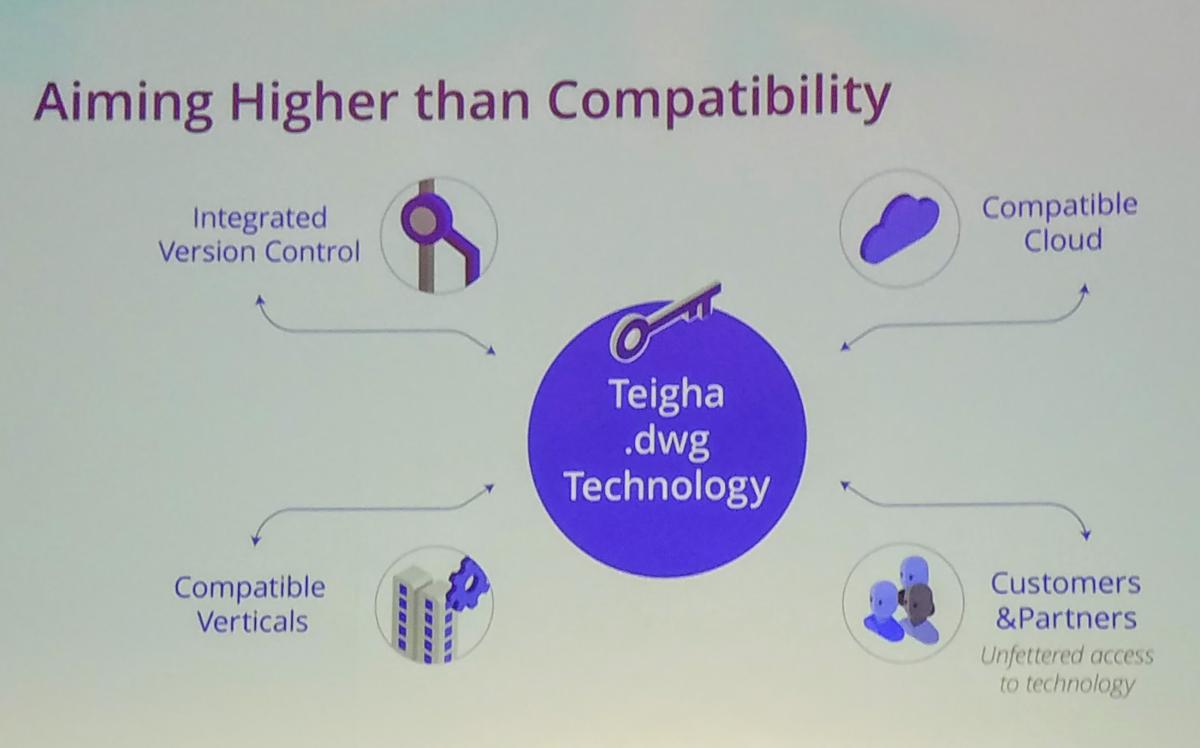 Bricsys is openly challenging Autodesk and courting AutoCAD users — this was evident throughout the conference — and, accordingly, delivering what it believes will attract the AutoCAD community to the BricsCAD fold:

At the end of a day full of product updates and demos (stay tuned for my roundup in Part 2 of this series), Bricsys had a major announcement: A brand-new software application is in the works, called BricsCAD Shape, that will provide easy-to-use 3D conceptual modeling based on DWG. Models created with BricsCAD Shape can then be moved directly into BricsCAD BIM or any other DWG-based software. Shape is free and intended for widespread adoption, according to the company. It is scheduled for release later this year or in early 2018.

“We have to address the need for starting simple” by providing easy-to-use tools to create conceptual designs, “and it has to be fun,” said Kevin Settlemyre, lead developer. Presumably taking on SketchUp, the popular conceptual design modeler from Trimble, Shape has a user interface that is simple “but missing nothing,” Settlemyre said. “Shape is easier than anything else on the market.”

And Shape is fast: As Settlemyre described software features, attendees watched a live demo that created a full-fledged building design from scratch in about 10 minutes. 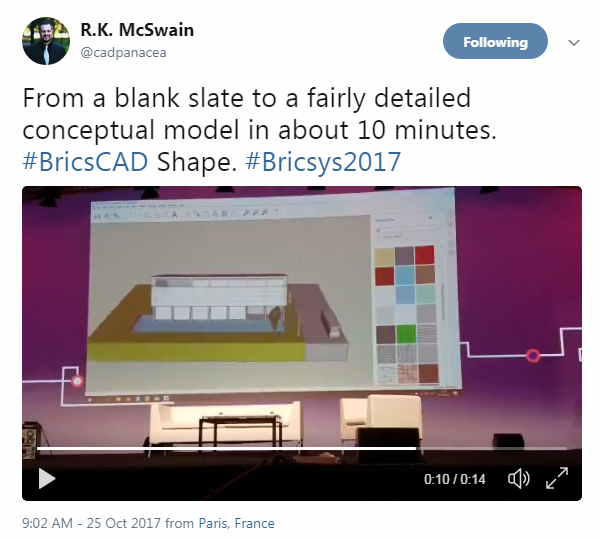 CEO de Keyser wrapped up the conference with a promise: “We reconfirm our vision to keep DWG users on track for the next life of DWG. DWG is alive and kicking and will become even more effective and efficient in coming years.”