Editor's Note: This article was originally published in the Fall 2011 issue of Cadalyst magazine.

ArchiCAD has been in the market since 1987. ArchiCAD 15 is a mature solution for building information modeling (BIM), and Graphisoft's main focus for the latest version was to expand and improve the modeling interface for architects. The 3D user interface offers new and improved modeling tools in the form of the Shell tool, improvements to the Roof tool, and the new 3D editing plane.


The extruded method works similarly to creating tubes. The revolved method creates a shape around the axis. The ruled method lets you create twisted planes. 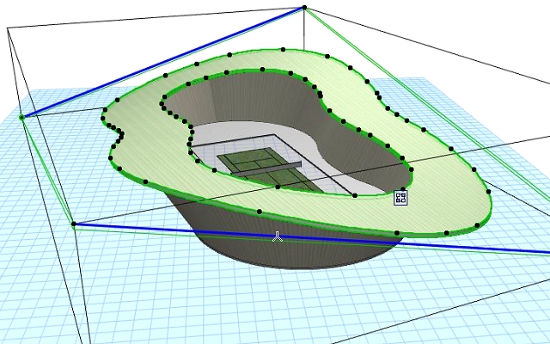 
Use Shell to create non-perpendicular structures and classify them as walls, roofs, or slabs for correct export to structural applications. You can assign a wall type composite to a shell's structure. You can stretch an edge of a revolved shell, and it distorts as if it were rubber. These new methods should let you create any shape; however, I'd like to see something more like a push-pull concept for modeling forms.

The Roof tool has been improved. In previous releases, designing a multiplane roof meant you had to create a bunch of separate roof plane objects that fit together. Now a multiplane roof behaves like a single, coordinated roof system. After you define the perimeter and create the roof, you can easily click on the edges, peaks, and corners to change shapes and contours, turn hips into gables, and more. You can do all of this in a 3D window — a very nice improvement. 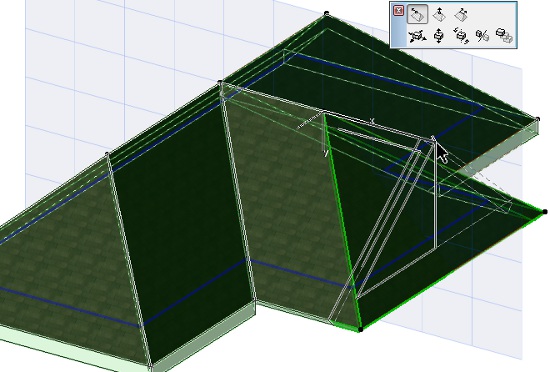 In ArchiCAD 15, it's easy to edit a roof in 3D, such as stretching a hip into a gable.


3D editing plane. When you work inside a 3D view, it's easy to become disoriented. ArchiCAD 15 has added the 3D editing plane to help. You can easily conform this plane to the plane of any element in your view, as well as the universal xyz-planes. Guidelines are now under editing planes, and you can move them around to help you snap to the planes of other elements in your view. 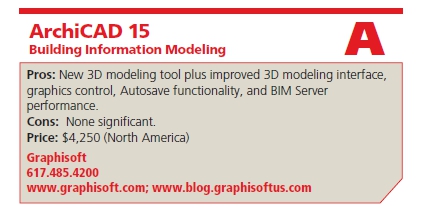 Renovation. ArchiCAD 15 adds workflow support for renovation and refurbishment projects — a long-time wish from users and a timely addition for today's building market, where upgrades and additions can be more common than new construction.

Renovation filters let you control how you want new, existing, and demolition linework to display. Put very simply, a demolition element could be dashed; existing linework could be a thin solid line; and new work could be a bold solid line. And it's now easy to create your own renovation plan types or styles using custom renovation filters. Before this new feature, it was difficult to show certain situations — such as a door that needs to be demolished — as solid lines in the existing work plan, as dashed lines in the demolition plan, and as a solid rectangle in the new work plan to show that the object was removed and filled in. 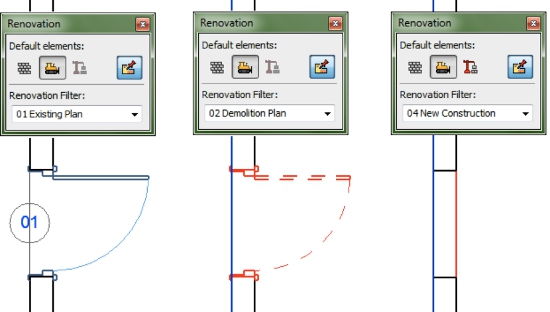 
Integration. IFC Property Management improvements mean that every object and element now can have its own IFC setting to export. You can program a shell to be a roof, slab, wall, and the like. But no option exists to add the assigned IFC object properties in an element list scheme within ArchiCAD. There are nine different IFC translators provided, tailored specifically for exchange with different programs such as Revit MEP, Revit Structure, Bentley Building, and Tekla Structures.

Library. Library migration between ArchiCAD 14 and ArchiCAD 15 projects is now easier. Instead of having to load the old object library when moving to the next version, now when you open an ArchiCAD 14 project in ArchiCAD 15, the new system detects the old objects and loads the new versions instead. When you open an ArchiCAD 15 project (that you saved down to v14) in ArchiCAD 14, the v15 objects are automatically swapped out for the v14 objects. Many new objects have been added to the new ArchiCAD Library 15. This list includes sustainable design objects such as wind turbines and solar panels. In addition, new medical furnishings and equipment, modern interiors furnishings, and plumbing fixtures have been added. 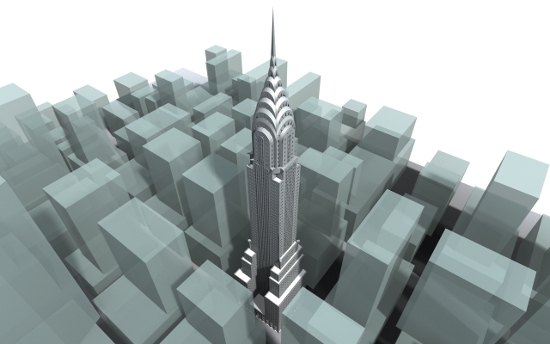 A YouTube video shows the Chrysler Building being modeled in ArchiCAD 15, including how the new Shell tool speeds creation of complex forms, by architect William Van Alen.


Performance. The Autosave feature has been refined to execute unnoticed in the background, so you are no longer forced to stop working and wait for Autosave to do its thing. This is fantastic for large projects. So many times I have groaned while waiting for Autosave to finish.

ArchiCAD is one of several BIM solutions on the market today. Nearly all are mature, full-featured, reliable solutions. At the end of the day, the one you prefer probably depends on which feels best to work in. I prefer ArchiCAD for its workflow. It has a "go-cart" feel to its 3D modeling tools (no Sketch Mode). It has an excellent project navigation GUI, where the views are in a separate panel from the sheets, and you navigate objects (blocks/families) via a separate interface, which has good graphic representations of the objects, plus it has a Search feature. The selection tools are great (especially once you learn the keyboard shortcuts). The 2D drafting and editing tools are superior compared to its main rival — a full-featured BIM program still must have fast and multifeatured 2D tools. The latest features aimed at improving the 3D modeling experience, for architects give me a few more reasons to feel good about ArchiCAD. Highly Recommended.