Generative Design Is Changing the Face of Architecture

New technology allows humans to harness computational powers for practical ends and to generate building design options that couldn't otherwise exist. How did it develop, and where will it lead us?


Editor's note: Earlier this week at its Be Inspired awards event in Charlotte, North Carolina, Bentley Systems recognized outstanding applications of its infrastructure design technologies in 17 categories. Many finalists incorporated GenerativeComponents, a relatively new technology that facilitates quick exploration of what-if design alternatives that can result in free-form buildings incorporating innovative materials and assemblies. The winner in the Innovation in Generative Design category was Feilden Clegg Bradley Studios (Worcester, United Kingdom) for the Worcester Library and History Centre, notable for its roofscape that reflects the undulations of the nearby Malvern HIlls. Following is a look into the development of GC technology and how it is changing the approach to building design for many architects. Watch Cadalyst.com for future coverage of other Be Inspired award winners.

Author Jim Paul remarked in Catapult: Harry and I Build a Siege Weapon that only with the invention of the catapult did engineers begin to attain pre-eminence in world affairs, for it was the use of the catapult that viscerally demonstrated — for the first time — humans controlling mechanical forces many times more powerful than the human body.

It feels as if a similar shift is now happening in architecture, as a new class of software tools — collectively termed generative design — allows humans to control intellectual forces many times more powerful than human minds to design and construct buildings that could not otherwise exist. It is not the first time, of course, that humans have harnessed vast computational powers for practical ends, but something about walking around inside the results brings home the magnitude of what is happening.

Humans are fond of impressive buildings. The 2008 Olympics, for example, probably will be remembered as much for two spectacular buildings — the Beijing National Stadium and the Beijing National Aquatics Centre — as for the many world records that were set in them. Better known as the Bird's Nest and the Water Cube, respectively, the buildings’ design, engineering, and construction depended heavily on generative design. By seizing the world stage so dramatically, the two buildings raised the profile of generative design (also called computational design or parametric design) and, to some extent, architecture may never go back. 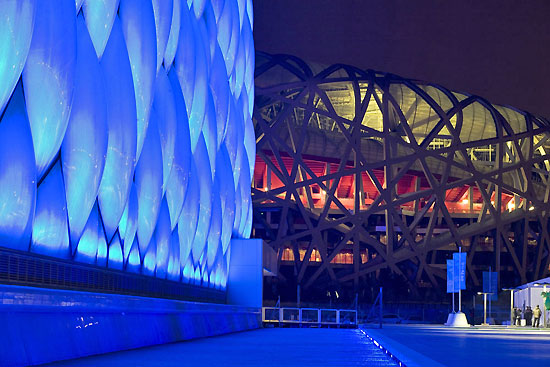 Securing the design contract for the National Aquatics Centre for the Beijing 2008 Olympics was a task worthy of gold-medal distinction in itself. Arup (a multinational engineering, design, project management, and consulting firm), PTW (an architectural firm based in Sydney, Australia), and the China State Construction Engineering Corp. (CSCEC, Beijing and Shenzhen) beat out 10 qualifiers for this prestigious, world-class project. Arup used MicroStation, MicroStation TriForma, Bentley Structural, and Bentley's generative design technology for its unique design based on a natural pattern of organic cells and the formation of soap bubbles.

"Generative design is not about designing a building," explained Lars Hesselgren, "It's about designing the system that designs a building." Hesselgren is director of research at Kohn Pedersen Fox Associates (KPF), an international design studio, and a cofounder of the SmartGeometry Group, a nonprofit collective that is taking the lead in bringing generative design concepts to real-world architectural projects, mainly through a series of groundbreaking conferences. (To learn more about the SmartGeometry Group, see the sidebar at the end of this article.)

By bringing together working architects, academics, and industry members, SmartGeometry has raised the bar for generative design in actual practice, influenced some of the best minds now entering architecture, and fostered an unusually close collaboration with industry to produce Bentley's GenerativeComponents software.

Built into MicroStation V8i, GenerativeComponents is associative and parametric modeling software that can be used by architects and engineers to automate design processes and accelerate design iterations. It gives designers and engineers new ways to explore alternative building forms without manually building a detailed design model for each scenario. It also increases efficiency in managing conventional design and documentation.

Architecture Gets an Upgrade
Generative design proponents agree that it isn't that architects are now using computers to do things that couldn't be done previously. Rather, computers are enabling architects to take on design tasks that would otherwise be inconceivably tedious. "It's like fractals," said Hesselgren. "Ada Lovelace knew something of them in the early 1800s, but to work them out by hand and obtain significant results would have taken her several lifetimes." Similarly, computational techniques exist today to work out, for example, the interwoven facade of the Beijing National Stadium, but to resolve a particular iteration using conventional CAD techniques would take so much time that, at best, just one or two versions would have been considered.

J Parrish, director of ArupSport, the division of Arup at the leading edge of large-venue design, and also a cofounder of SmartGeometry, added, "Using parametrics, I was able to investigate far more alternatives. We built version 34 because it was better. But version 1 would have worked fine. Generative design allowed us to get better results in a fraction of the time."

ArupSport provided engineering and design services for both of Beijing's major Olympic venues. Parrish helped pioneer the rapid prototyping face of generative design and began working with Microsoft's Visual Basic and Excel — "a useful interface" — and MicroStation in the 1970s to design stadiums quickly. By tweaking any of 3,000–4,000 parameters, Parrish was able to quickly compare, for example, various 50,000-seat positioning schemes and optimize them for views, distance from the field, and other factors.

"I could do in a morning what used to take me a month," Parrish said. Combined with other new technologies such as real-time rendering and 3D printing, parametrically enabled rapid prototyping amounts to a new way of performing architectural design — arriving at optimum solutions using side-by-side comparisons of multiple, slightly different versions, rather than depending on the "flashlight in the dark" of one designer's genius.

A complementary approach also is possible. Rather than using multiple versions to decide what is best based on comparison, architects can instead use computing power to find structural solutions that are self-organizing; that is, not decided on by an individual but arrived at by genetic algorithms that iteratively apply relatively simple rules. The Water Cube's soap bubble-like structure is an example of this approach. 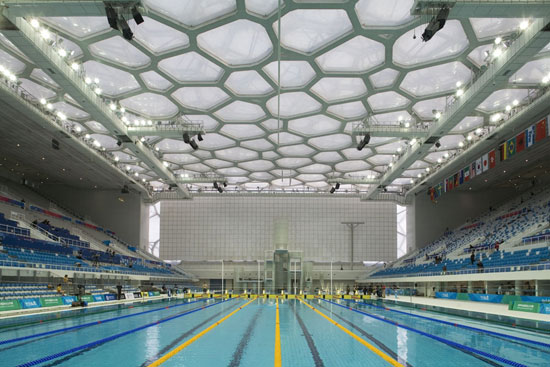 The ceiling over this pool showcases the Water Cube's "soap bubble-like" structure, which was designed with parametric software specially written for the purpose.

According to the book Space Craft: Developments in Architectural Computing (RIBA Publishing, 2008), "Irish physicists Denis Weare and Robert Phelan were able to calculate that the most efficient way to divide a space into cells of equal volume while minimizing the surface area between them was to use a stacked arrangement composed of 75% 14-sided shapes and 25% 12-sided shapes." So far so good, but since the resulting structure would have 22,000 steel members connected at 12,000 nodes, generating an actual model based on the idea exceeded the reach of conventional design.

Instead, according to the book, to manipulate this complex geometric system dynamically, Arup wrote parametric software that automated the drawing and analysis process. Based on specified design constraints and less than 190 loading scenarios, the algorithm iteratively checked the distribution of forces through the entire structure based on specific member sizes, allowing the team to test different design configurations and receive feedback within 25 minutes. The result was a spectacular building with a sophisticated structure that is optimized in terms of material weight-to-strength ratio, and it was achieved with relative ease. In addition to the structural advantages, Arup estimated that it saved $10 million on design costs alone compared with traditional design methods. 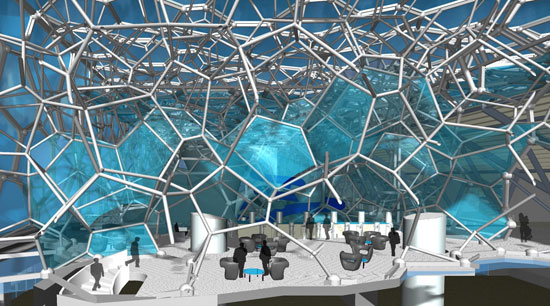 The optimal design for the Water Cube was determined by analyzing multiple configurations of the thousands of steel members and connecting nodes.

Building on Relationships
Jenny Sabin, codirector of Sabin+Jones LabStudio, a lecturer at University of Pennsylvania, and a long-time tutor at SmartGeometry conferences, offered her take on generative design: "Architecture is inherently about relationships. I'm interested in the way small, local relationships and simple parameters give rise to complex scenarios — bottom-up design as opposed to top-down. Generative design gives rise to emergent behaviors and forms." By bottom-up and emergent, Sabin is alluding to the natural processes that create complex structures such as termite mounds. Without benefit of a designer, simple, rule-applying units such as termites interact with basic materials — in this case, soil — to create complexly ordered structures.

Sabin uses generative design in fields only tangentially related to architecture, but they ultimately affect the way that she negotiates complexity in architectural contexts. For example, Sabin+Jones LabStudio is investigating the way surrounding cellular structure affects breast cancer growth and finding that modeling cell growth patterns with computational techniques yields insight into cancer formation. "Generative design allows us to navigate and generate complexity in a way that technology hasn't achieved before," she explained. "Algorithmic design is not necessarily new, but the tools we now have for approaching bottom-up design are far more sophisticated. It's almost as if the software itself has become a new material to work with."

SmartGeometry's Hesselgren offered an interesting differentiation about the use of computers in architecture. "There is a big difference between designing architecture as opposed to recording it properly. Concepts like building information modeling are important, but they're concerned with recording design decisions. They don't talk to you. Computers haven't done much but record until recently, and the ability to record is not the most important thing we do."

ArupSport's Parrish said, "What we're doing is not really new. In the '70s, I saw people doing parametric design with spreadsheets — they could work out lifts, 2D plans, etc. But with SmartGeometry and commercial software like GenerativeComponents, the work doesn't die when the people creating it move on. Other people can build on it, and the returns are substantial."

This iterative, emergent process — people designing better tools to take on interesting projects and then conceiving more interesting projects to take advantage of the better tools — is at once new and quintessentially human. By building and using better design tools and creating a culture that gets the most out of these tools, the generative design movement is becoming a potent tool for evolving our built environment.