While it's true that video games are often thought of as mere entertainment, gaming has frequently crossed into other fields and has helped improve efficiency and information sharing in some of the most critical areas of society. For example, there has long been an overlap between gaming and military initiatives; the U.S. Army launched the America's Army game franchise in 2002 as a recruitment, training, and public relations tool. More recently, citizen scientists have made headlines by using Foldit, an online game interface, to model complicated protein structures that researchers had been attempting to understand for years.

AEC professionals have been experimenting with game technologies since the early 1990s. At that time the only virtual reality (VR) environments in existence were room-sized chambers housed in university, government, or corporate laboratories, and the hardware consisted of projectors and screens or — at the very cutting edge — stereoscopic eyewear known at the time as "eye-phones." The virtual worlds depicted had the same blocky, pixelated graphics as video games of the day. But studies were under way at the University of Washington's Human Interface Technology Lab, among others, that invited practicing architects to identify the overlap between the emerging fields of CAD and VR. Now, VR technology has progressed to the point where portable gadgets and interfaces are so affordable and accessible that they can be used in any office.

In the mid-1990s, some video game developers began to include user-friendly level editors in their games. These tools allowed users to make changes within the game environment and "spawned the concept of making your own game," said Jeremy Harkins, director of design and digital technology consultancy at ineni Realtime, an Australian firm that develops custom software to connect the physical and digital worlds. Before that, games and VR programs were composed of strings of code that were inaccessible to most users. 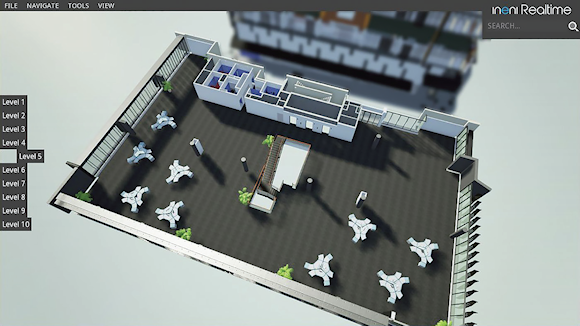 In a program developed by ineni Realtime, one level of a ten-story office building has been pulled out from the model for closer inspection. In this mode, a user can arrange the desks and other furniture for planning purposes. Image courtesy of ineni Realtime.

Today, in contrast, almost all games are built upon game engines — entire packages of foundational code that provide the underlying framework of a game's mechanics and produce everything from its animation to its sound. Two of the best-known game engines that also have applicability in the architectural realm are Unity 3D and Unreal Engine. These programs have graphic interfaces, so designers can build games without being masters of coding, making the creation process accessible to more people.

Game engines have converged with another developing technology: building information modeling (BIM). Developers are currently experimenting with uniting the 3D models produced via BIM software with the more immersive, realistic environments that have so far been limited to the biggest-budget video games. The result is a simulation of the built environment that brings a new level of realism and engagement to designs, enabling architects, designers, and clients to see them in a whole new way.

Rapid hardware development is taking place side by side with these software advances. State-of-the-art VR visualization technology consists of stereoscopic headgear or goggles that make wearers feel as if they are actually inside a particular 3D space. While wearing one of these devices, a person can look down a hallway or up at the ceiling with a turn of his or her head, thanks to a feature known as head tracking, which involves sensors that monitor head movement and adjust computerized images accordingly. By manipulating a game controller, the user can "walk" through the world established by the VR program, exploring a building design or evaluating how the structure is positioned on the proposed build site.