The Oculus Rift is currently the leading product in immersive, wearable VR devices. Released to developers in early 2014 by Oculus VR, sales of the Rift developer kits quickly climbed into the tens of thousands and in March, Facebook CEO Mark Zuckerberg purchased Oculus VR for $2 billion. Other devices that were already on the market sell at a higher price point; some are proprietary technologies that only function with particular game systems. For example, Sony Computer Entertainment introduced the prototype of its Project Morpheus in March 2014, but that device works exclusively with the company's PlayStation 4 game system. The Oculus Rift, by comparison, is not tied to any particular system and will sell for only a few hundred dollars, with a tentative 2015 introduction to the consumer market. 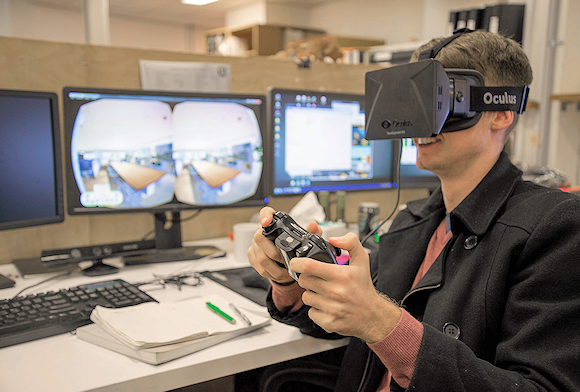 The twin screens inside the Oculus Rift create a stereoscopic view that immerses the user in an interactive 3D environment, enabling realistic walkthroughs of building designs. Image courtesy of ineni Realtime.

"What Oculus has done well, which no one else has, is create a community surrounding their product," said Tom de Plater, Design Systems Specialist with Peddle Thorp, a company that practices architecture, planning, and interior design. "By making an open-source piece of hardware and releasing their software, the company has seen a huge community of people create games, add-ins, and plugins that are written for the Oculus Rift. There are also many people from different industries — such as design or communications — who are, essentially, hacking it for their own purposes," de Plater added. A communal approach was built into the Rift's development: It was funded by a Kickstarter campaign.

As for its performance, "Right now, the Oculus Rift is still somewhat low resolution — using it is a bit like viewing the world through a fishnet," said Harkins of ineni Realtime. "But it is getting really close to a truly immersive environment." Harkins also noted that the device is not wireless; users must remain plugged into the computer running the VR program, which limits their ability to move freely. It is expected, however, that such shortcomings will be overcome in the near future.

Coming to an Office Near You?

Right now, the use of gaming technologies in the construction industry is mostly limited to personalized product demonstrations, but gaming applications are developing rapidly, said Harkins.

At Peddle Thorp, de Plater uses immersive rendering as a design tool, moving BIM models from Autodesk Revit into the Unity 3D game engine so that those models might be experienced in a more realistic way. "But tools such as the Rift aren't really plug-and-play — at least not for design," and this fact should influence whether such devices can really be deemed affordable, said de Plater. "Any firm can own the hardware. However, depending on what you want to do, the affordability of the hardware changes once you realize how much back-end work there is to utilize the device in a BIM environment."

The problem, according to de Plater, is that most AEC firms are still transitioning from 2D rendering to 3D. He believes that the adoption will take place in a series of stages. "Real-time rendering — the use of gaming engines for communication — will lead to immersive rendering, or the introduction of hardware for coordination. That will eventually lead to augmented reality, or the projection of the model onto the site for construction. But, we will need a great understanding of each concept before we move through to the next — and right now, real-time rendering is still underutilized."

In theory, a complete and well-made model should be simple to import, because most game engines recognize common file formats, but not all BIM models are made perfectly. Help may be on the way, however: de Plater noted that a few developers are working on plugins that will simplify the interface between Revit and gaming engines.

Time and the Building Model

Immersive rendered environments are capable of doing more than accurately depicting designed structures and spaces and providing realistic walkthrough experiences. They can also facilitate real-time information exchange, providing benefits throughout a building's lifecycle. For example, with integrated sensor feedback, the model of an office building could show facility managers temperature data in context with desk occupancy and even relocation options.