Ineni Realtime is involved in the early stages of just such a groundbreaking project. The project team is installing sensors throughout a building, in everything from card readers to desk chairs, and linking each physical object with an asset number in a database. A computer "game" system can record feedback from those sensors and manipulate the data to create output scenarios.

Liverpool Council in New South Wales, Australia, uses a real-time planning tool to show proposed developments in the area. The application will be used in public spaces on touch-screen kiosks for community engagement. Users can provide feedback to the council by leaving comments in the 3D environment. Image courtesy of ineni Realtime.

This capability will make BIM files more valuable to building owners. "These expensive 3D models have so far not been widely used in the continuing lifecycles of buildings, their intensive use ending when construction is completed," said Harkins. "But asset management will change that. In BIM models, items already have identification numbers. Those can be linked to the finished objects in the real world."

Users can even control the real world from within the environment, explained Harkins, sending messages to building occupants and adjusting alarms or lights, for example.

The developers of these new technologies imagine a fluid, bidirectional interaction between the real and virtual worlds. Harkins pointed to popular medical-themed computer games as an example. "People are playing games, designing, and running hospitals for fun — once they are good at working in that game environment, can their knowledge be applied to a real facility, like a nursing home? Computer technology can be built into the facilities, giving people the power to check in and interact and connect with family members." 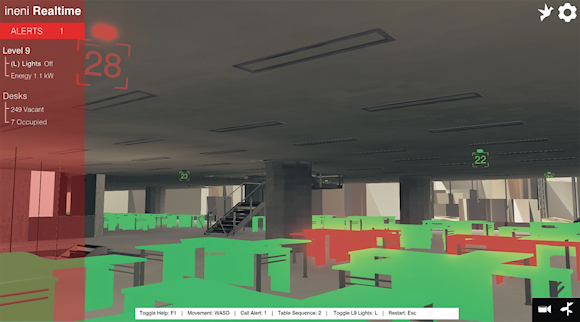 Harkins predicts that related technologies will continue to merge with VR to create even more useful tools in the not-so-distant future. Consider motion-sensing hardware — the kind that has become familiar in game technologies such as the Microsoft Xbox Kinect, which allows players to control games via their voices and body movements instead of handheld controllers. "You can wave your hands and affect the game environment," said Harkins. "Maybe in 10 years, this will be integrated into an immersive environment in which architects can simply use their hands to move a virtual wall, intuitively designing the space around them."

Perhaps one of the biggest benefits of incorporating game technologies into AEC workflows will be to make the real world more fun. After all, as Harkins pointed out, a huge percentage of people spend time playing games on their phones. To be able to integrate this kind of activity into daily work should make our business lives much more enjoyable — although we may have to find something new to do in our free time.