The Smartgeometry event is home to some of the most advanced thinking and application of computational software that you're likely to find in the architecture field. So why does a visit there feel for a moment as if you've stumbled into a kindergarten classroom?

The answer is all about tools. Smartgeometry revolves around hands-on workshops that, in their efforts to challenge current design methodologies, are just as likely to call on pencils, paper, utility knives, and duct tape as they are to turn to highly sophisticated technologies. The 100 participants — including designers, engineers, architects, craftspeople, and university instructors and students — tap digital as well as physical media to explore concepts and take them from idea to design to production. Indeed, choosing the right tool for a given task was a guiding principle at this year's event.

Smartgeometry Group, the organization behind the event, is a handful of professionals who volunteer their time in pursuit of their passion for computational design. Bentley Systems, developer of GenerativeComponents computational design software, is a cofounder and major sponsor of the event.

GenerativeComponents is one of a handful of computational design solutions on the market that uses algorithms to automatically iterate design options within specified boundaries. It captures and exploits the critical relationships between design intent and geometry, enabling designers to quickly explore a broad range of what-if alternatives for even the most complex buildings. Designs can be refined by dynamically modeling and directly manipulating geometry, by applying rules and capturing relationships among building elements, or by defining complex building forms and systems through concisely expressed algorithms.

Hosted by The Bartlett, the University of Central London's faculty of the built environment, Smartgeometry 2013 was themed "Constructing for Uncertainty." It explored how building professionals can use technology to design spaces, buildings, and cities in the face of variable economies, forces of nature, and even occupant behaviors of the future. Officially, organizers stated that the event would address "the transition of computational design from the hard space of the ideal to the soft reality of an uncertain built environment."

Shane Burger, director of design technology at Woods Bagot in New York City and a member of Smartgeometry Group, explained to the media that today's users of building design and construction software technologies face a major limitation: Only a subset of the relevant factors in design can be represented in standard CAD systems. "As users," he said, "we must drive computational systems to assume new roles and subsume more domains to meet the needs before us. We must consider issues of time and permanence within a cultural and technological landscape of constant change. … As designers, we must deal with realities and future uncertainties of context, material and immaterial, and their manifestations in scale from spaces to buildings to cities."

In addition to the four-day workshops that kicked off the event, Smartgeometry included Talkshop, a series of panels discussing topics such as "Technology and the Future Culture (from Open Source Computing to Synthetic Biology)"; a symposium featuring several renowned speakers, including Michelle Addington, a Hines professor of sustainable architectural design at Yale University; and a press conference focusing on real-world applications of concepts that originated at Smartgeometry, to which Cadalyst was invited by Bentley Systems. 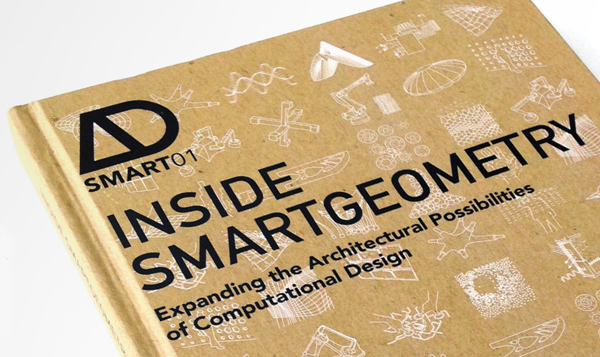 Smartgeometry, celebrating its tenth anniversary, introduced its first published volume, Inside Smartgeometry. The group doesn't publish traditional conference proceedings because the information that would be shared is collected in the workshops that take place during the event. Although discoveries typically emerge later as part of many subsequent efforts across the industry, organizers said, that information is not distributed or widely discussed during the remainder of the event. Inside Smartgeometry looks at how Smartgeometry came about and matured with and through the emergence of computation within architecture over the past decade. It highlights important developments identified by conference organizers.

The hands-on workshops that kick off the Smartgeometry event, also known as "clusters," comprise people, knowledge, tools, materials, and machines for participants working together within a common framework. They have been described as "thought experiments" in which group members actively participate in developing knowledge or understanding about a particular topic.

Ten clusters made up this year's workshop. One, Adaptive Structural Skins, explored how to form the load-bearing enclosure of a new generation of buildings through parametrization, analysis, optimization, and form-finding. Participants employed physical media as well as GenerativeComponents and its STAAD plug-in to design and validate the structural integrity of various design options. They developed and analyzed structures that could move and adapt to changing conditions and explored ways to make them adjustable. Looking to origami for inspiration, they developed options using sprung steel (the same material used in tape measures), which carries a load when not folded. Participants created ideas in paper form, then simulated them and "made them more structural" using software technologies. Some options could be folded and locked into position, they found. 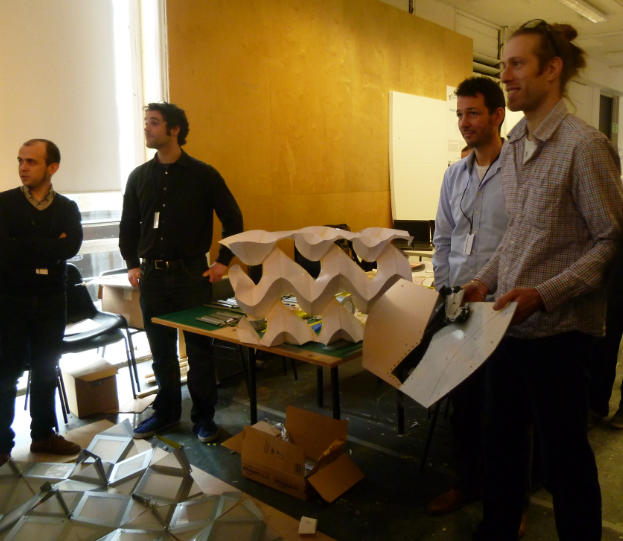