The Sky Is Not the Limit

Advances in BIM and software interoperability are helping propel a boom in supertall building construction.


Editor's note: This article was originally published in the Fall 2011 issue of Cadalyst magazine.


For more than 100 years, the world has been beguiled by the idea of constructing buildings that reach into the heavens. After Gustave Eiffel wowed the world in 1889 with his delicately latticed tower, humbled American architects began to embrace the idea of the tall building. Although the first skyscrapers were modest interpretations of the dream, they still were feats of engineering and architecture, and each time a skyscraper went up, technology evolved to make the dream possible.

During the 1920s and '30s, the skyscraper trend intensified into a national fervor in the United States, and the boom of construction gave rise to the Chrysler Building and Empire State Building in Manhattan. Of course, both were in high competition to claim the mantle of world's tallest — a title the Empire State Building won by 204 feet. The Skyscraper Museum in New York City considers that structure's 1,250-foot height to be the low bar for supertall skyscrapers today.

According to the Skyscraper Museum, in 2007 there existed 35 buildings — completed or on the boards — that fit the height requirement for categorization as supertall. Twelve of those projects dropped off the census as unrealized, but another 26 have been added for the current total of 49. 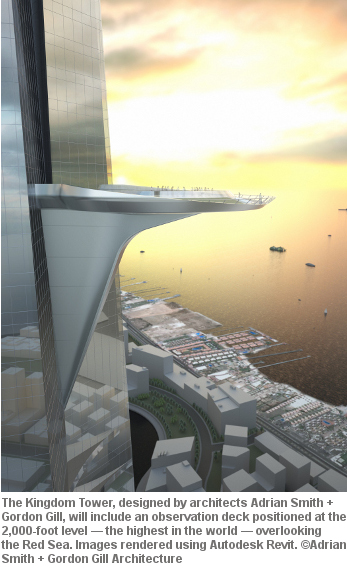 "When the Twin Towers were destroyed in the terrorist attacks of 9/11, many predicted the end of the skyscraper era," says Carol Willis, director of the museum. "They were wrong. As [our] exhibition shows, supertalls are a significant building type of the 21st century."

The quest to construct the world's tallest building continues today. At present, the two-year-old Burj Khalifa (located in Dubai, United Arab Emirates, and previously known as the Burj Dubai) holds the title of world's tallest at 2,717 feet. Designed by Adrian Smith when he was at Skidmore, Owings & Merrill, the Burj Khalifa's record already has been challenged, and its fall to second tallest is imminent.

The challenger is the Kingdom Tower, now in design development by Adrian Smith + Gordon Gill Architects (AS+GG). To be located in Jeddah, Saudi Arabia, the structure is projected to reach a height of at least one kilometer, or 3,280 feet.

"Our vision for Kingdom Tower is one that represents the new spirit of Saudi Arabia," said Smith. "This tower symbolizes the Kingdom [of Saudi Arabia] as an important global business and cultural leader and demonstrates the strength and creative vision of its people. It represents new growth and highperformance technology fused into one powerful iconic form."

Indeed, that desire to provide structural evidence of one's arrival on the world scene — be it a corporation such as General Motors, an entrepreneur such as Donald Trump, or a country such as Saudi Arabia — has been the driver for many tall structures. It's what propelled Manhattan and Chicago to their storied heights, and it's what is driving the current proliferation of supertall structures in Asia and the Middle East.

As was true in those early, heady days of the skyscraper, today's design and construction technologies continue to evolve, allowing these extraordinary structures to be not only conceived but also delivered. Robert Sinn is the leader of Thornton Tomasetti's Building Structure practice and is the engineering firm's principal-in-charge for the Kingdom Tower. Sinn identifies advances in construction technology such as high-strength concrete, super-fast elevators, and mass-tuned dampers as being key to the creation of supertall structures. He also credits increasingly effective wind tunnel studies and design analysis software that tap computational geometry.

Ken Murphy, Thornton Tomasetti's BIM (building information modeling) director, agrees that computational geometry is a boon to these massive projects because it provides mathematical computation capabilities rather than strictly design models. The computational geometry platforms enable designers and engineers to exploit the building information model for purposes that go beyond implementing simple design changes such as altering the number of floors or points of egress. Instead, embedded algorithms extend the changes to automatically adjust material quantities such as building skin elements and columns. "As we get further in the design process, we can do things such as panelization studies on a facade where a lot of mathematics tie into the model, and then we'll optimize for how many panels need to be a unique size or bent out of plane to avoid cost [overruns]."

Murphy added that this functionality is especially advantageous when competing for projects, because it allows users to generate multiple design iterations very quickly.

Interoperability at the Forefront

Although parametric modeling and computational geometry offer tremendous advantages to any building project, Murphy credits interoperability with making it possible to achieve the massive heights of supertall skyscrapers. He believes that interoperability enables a very efficient workflow, with models being coordinated very quickly in different software programs without the need to recreate models or model in parallel. This helps designers meet fast-track schedules and reduces errors on more complex structures.

"We had computer-based analysis programs when I began [practicing] in 1984, but it took much longer to build and de-bug the models," said Sinn. The lack of graphical interface and the computer runs that had to be sent to an offsite mainframe computer slowed the design process considerably. "To save on run times, we always looked to limit the model size by imposing symmetric assumptions. The post-processing of analysis into design was through early-generation spreadsheets and was very time-consuming."

As BIM and interoperability advance, Murphy explains, more complex projects can be worked on very effectively and more options explored in less time. The quality of the end product is globally affected in a positive way.

The Kingdom Tower project, which is being modeled in many different applications, is a prime example of the importance of interoperability. Begun primarily in Autodesk Revit, the building information model is further detailed and optimized in applications such as CSI's SAP2000 for structural analysis and ETABS for building analysis and design; Rhino from Robert McNeel and Associates for NURBS modeling; Tekla Structures from Tekla for structural analysis; and Grasshopper, a generative-modeling tool that integrates with Rhino. "Most of these [tools] require custom plug-ins and translators that we develop internally, [although] there are some commercially available tools such as the CSI ETABS plug-in for Revit," says Murphy.

Multiple Analysis Tools. Murphy and his team rely on these tools throughout the modeling process for the main superstructure, but he adds that the list doesn't end there. "There are also finite-element analysis tools that will analyze just particular pieces of the model," such as Strand7. "But the key thing is that it's not just modeled on one application," Murphy says. "[We rely on] multiple analysis models so the results can be compared to see if there are anomalies that one application will catch and the other will not."

"I think that's going to be key on this project," adds Sinn, referring to the need for interoperable applications that are shared across the project team. "There are going to be some very tight spaces in the mechanical room, for example, that we've already developed in Revit, where we're not going to be able to pass all the services just through the walls. We're going to have to go underneath coupling beams. There's a lot of structure in this building that has to be worked around MEP [mechanical/electrical/ plumbing] services and so forth, so a lot of that work is well under way already in terms of clash detection."

Common Platforms. The coordination between Thornton Tomasetti, AS+GG, and contractor Saudi Binladin Group is critical to the success of the project, believes Sinn. "All those things are just a lot easier to deal with on a common platform [like Revit] than trying to do it by passing files back and forth. ... The client expects the tower to be completed 63 months after construction starts. There isn't time to approach the project through a standard build process. All of the tools that we use as designers will have to be forwarded on to the construction team in order to meet the schedule goals. It's the only way it can be done."

Without CAD and BIM, these buildings would be very difficult to design in the time frame expected today, explains Sinn. "If you compare the tools that we have now to [what was available] back in the '60s and '70s, there's no comparison," he says. "In a matter of two to four months, we can have a pretty complete structural engineering design of the tower with all of the concrete dimensions and a reinforcing design for the building. If we have to change it, we can do it relatively quickly. In my career at least, that's a huge amount of progress that we've made in technology."

As BIM and interoperability evolve and integration of these tools into the AEC workflow grows stronger and broader, the trend to build increasingly higher most certainly will continue as well.

Like New York and Chicago in the early 19th century, Asia and the Middle East today are gaining new wealth and world status and are eager to showcase their prosperity and ideals. Building supertall skyscrapers is an elegant (if not always economical) way to do that. As was true with the building of the earliest skyscrapers, the current demand for supertall skyscrapers will necessitate the development of newer and faster technologies, thus pushing imagination further into the sky.