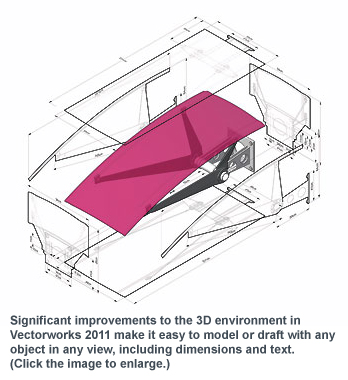 Nemetschek Vectorworks CEO Sean Flaherty has dubbed Vectorworks 2011, released this week, the largest Vectorworks release in the product's history. In a web presentation to the press, he said, "We've done really substantial replacement of a lot of our different functionality, adding OBDC [open database connectivity], 3D wall components, a new text-editing platform, and a brand-new rendering engine kernel. There's a whole host of large, new features, particularly those that drive us into the 3D realm." The company summarized the major updates as follows.

Vectorworks now offers a true 3D modeling environment, the company reports. Biplab Sarkar, chief technology officer, said, "Taking a page out of the [mechanical CAD] world, Vectorworks now supports drafting on arbitrary working planes and interactive modeling based on the drafted entities." 2D planar objects can be created and edited within a planar context, where they display with all attributes. Users can work in top/plan view as usual, or switch to a 3D view and continue working in the same way, with the same tools and operations.

Vectorworks Architect offers improved ease of use and new tools designed to improve productivity, design quality, and collaboration. "Users will find the new 3D wall components, floors with components, and improved space and stair objects very useful to create the building model," Sarkar said. The product continues to support IFC open standards and is interoperable with a range of other products common to BIM workflows. 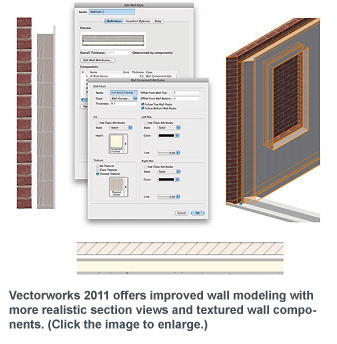 Vectorworks describes its Renderworks 2011 rendering solution as faster, easier, and more powerful than any previous version. The CINEMA 4D rendering engine (from MAXON, a Nemetschek subsidiary) is now fully integrated into Vectorworks software, so users can seamlessly visualize their work throughout the design process. With the click of a button, rendered viewports update as the design evolves. Renderworks 2011 naturally supports use of CINEMA 4D downstream for users who need advanced animation capabilities. For Renderworks users who also own CINEMA 4D version 12, a new Send to CINEMA 4D option exports the Vectorworks model, launches CINEMA 4D, and opens the model in that program. A Merge command moves geometry into CINEMA 4D. 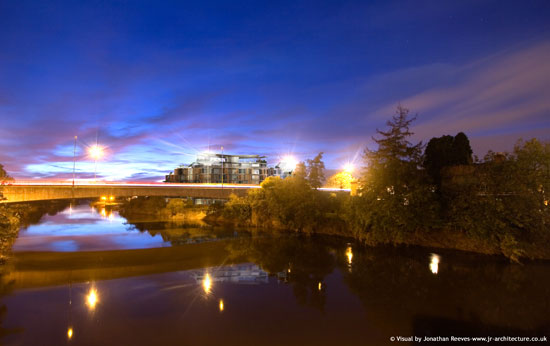 Renderworks 2011 is powered by the CINEMA 4D render engine. (Click the image to enlarge.)

"This release also delivers major improvements on the 2D side," Sarkar said. "Text and dimension improvements, scalable symbols, and tiling are some of the long-awaited features."

Flaherty noted that the Vectorworks customer base numbers 450,000 worldwide, and that the company has 75% of the Mac-based CAD market by revenue, according to Jon Peddie Research. "We are seeing confidence among our customers and a big turnaround in spending," he said, adding that sales have increased 40% over last year.

Vectorworks 2011 is available now in English, to be followed by other localized versions later this fall and a Japanese version in January, the company reports. Pricing varies. A discounted bundle of Renderworks 2011 and CINEMA 4D version 12 is available in the United States for a limited time, and discounts are being offered on the separate products for users who have one but not the other. Contact your reseller regarding product pricing and special offers available in your area. News and other information about the Vectorworks product line is now available via the Planet Vectorworks community site.