The current state of the economy calls for a closer look at how it's affecting CAD managers' jobs.


Well, I don't have to tell you there has been a wealth of bad economic news since the CAD manager survey was published last fall. I've been getting a lot of emails from CAD managers who want to know how things are going in their own industries and how conditions are for CAD managers in general.

To answer these questions I'm going to perform a CAD Manager Survey Update that focuses on industry segments and financial conditions. The survey will be brief, containing just a few questions, so it'll take only a few minutes to participate.

Take the survey at www.cad-manager.com/survey

Here are the questions I plan to focus on:

I'll compile the results of the survey and publish them in the next CAD Manager's Newsletter. Please take the survey now while you're thinking about it so your information can be included in the results.

There's a New AutoCAD!
After months of beta testing, the new AutoCAD version 2010 was formally announced last week and should become available to users by the end of March. For those of you on subscription, you can look forward to having a new AutoCAD platform to install and get used to in the very near future.

I plan to delve into the new features of AutoCAD 2010 in more detail as the software nears commercial release, but for now here's a sneak peek at some of the more interesting features for CAD managers. In each edition of the CAD Manager's Newsletter I'll share a few more new feature tips with you. These will get you started.

User Interface
If you or your users have struggled to go from the old AutoCAD user interface (versions 2008 and prior) to the new Ribbon-based interface of AutoCAD 2009 (and now 2010), you're going to like the new interface components AutoCAD brings. As you see below, the application menu now integrates the quick launch toolbar and can be oriented vertically to take advantage of the wide aspect ratio of digital monitors. 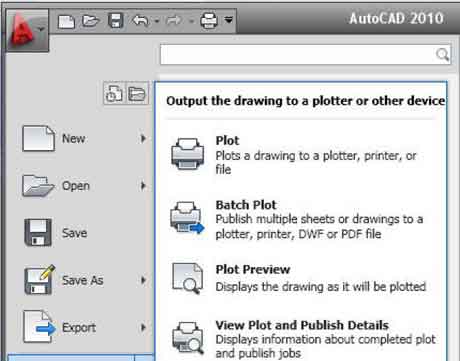 And now the unruly Ribbon can be customized into various "sticky panels" (see below) that can be dragged around the screen as you wish. Interestingly enough, it seems the Ribbon is migrating back toward the concept of having toolbars strategically placed on your screen just like in the old days. I found this new ability to tweak the Ribbon elements to my liking appealing right away, and I'll bet your users will, too. AutoCAD 2010, in my opinion, is the release that will actually make people want to use the Ribbon.

Bonus: You can now dock the Ribbon anywhere you want, not just along the top of the screen.

File Formats
AutoCAD 2010 sports a new DWG format that uses more compression to accelerate save times. Unfortunately, new DWG formats do mean you have to think about how to integrate the new version of AutoCAD into your existing project workflows. If you've managed AutoCAD-based products for any length of time, you've been through new DWG formats before, and this iteration will be no different.

You'll also find AutoCAD 2010 a lot more communicative via PDF and DGN formats. You'll be able to create better PDF output from AutoCAD 2010, and you'll now be able to use PDF and DGN files as design backgrounds much as you've used xref or DWF files in the past.

The figure below shows the Reference "sticky panel" that allows more thorough control of the various attachment, editing, and viewport manipulation features required to work with attached files.

We'll look at some more AutoCAD 2010 features in the next issue as well. Until next time.