Editor's note: Cadalyst is thrilled to mark a milestone in the CAD management community: the 400th issue of the CAD Manager's Newsletter, scheduled to mail on February 28, 2018. In his twice-monthly newsletter, Robert Green shares advice and insights informed by his decades of experience as a CAD management expert. Don't miss this insightful look back through CAD management history; if you're not already a subscriber, sign up for the free newsletter today!

Robert Green has shared his know-how in person, in webinars, and in writing — in print and digital formats — for decades. Here, he describes the path that's brought him to this point.

If you’d told me when I graduated from Georgia Institute of Techology with a degree in mechanical engineering that I’d be writing and speaking about CAD management some day, I wouldn’t have been surprised about the writing part — I’ve always loved writing — but I had no clue what CAD even was.

Everything changed one day when my boss tossed a rubber-banded package of floppy discs onto my desk and said, “This is some program called AutoCAD; I need you to get it installed and running.” I told him that I had no idea what AutoCAD was, or how to get started with it. He replied, “You’re a sharp guy, so I’m sure you’ll figure it out.” Little did I know that the seeds of being a CAD manager were planted that day.

Through various jobs and contracting gigs, I learned AutoCAD, SDRC, VersaCAD, Anvil, CALMA, and MicroStation, but no matter which tool I was using, the same patterns always emerged: I became the lead CAD user, and users looking for help with their CAD problems soon wore a rut in the carpet leading up to my desk. Though I was never called a CAD manager, I was functioning as one as I learned to support users, conduct training, work with vendors, and communicate with senior managers about all things CAD. Juggling all this with production engineering responsibilities was challenging, but I enjoyed the technology so much that I took it all on willingly.

Then in 1989, while working for a Finnish paper company, it finally happened: Upper management asked me to become the CAD manager. I would forgo production engineering in exchange for a promotion, a pay raise, and the new tasks of managing technology, people, and budgets. As I had in the past, I plunged ahead, figuring, “What the heck, I can always go back to being an engineer.” I never did. In fact, to this day I call myself a recovering engineer. 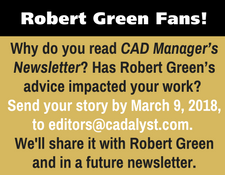 Fast-forward to 1993, and the company where I was working abruptly came to a screeching financial halt. When I found myself unemployed, I decided to start my own CAD management consulting firm, figuring, “What the heck, I can always get another job.” I never did. I still run my own company, and I’m proud to say I’ve been "unemployed" for 25 years now.

After a few years in consulting, I wanted to expand my horizons into public speaking and writing, so I applied to be an Autodesk University speaker and submitted some writing samples to CADENCE magazine. To my surprise, I was accepted as a speaker. Shortly thereafter, in 1995, CADENCE asked me to write reviews of CAD utility software products. As I honed my public speaking and writing skills, I noticed a trend: Almost all the questions I was getting were from CAD managers who were struggling with the same mixture of technical, training, and financial challenges I’d struggled with earlier in my career. It was during this key period that I decided to focus my writing and speaking efforts on the plight of the CAD manager, simply by sharing what had worked for me.

In 1998, CADENCE magazine made me an offer: They’d let me write a three-month series of one-page articles for CAD managers to see how the idea would go over. We called it Manager’s VPOINT and it was placed just inside the back cover of the magazine. The response was fantastic — beyond what I could have imagined. Manager’s VPOINT was then made a permanent fixture, and when I spoke at live events, I often heard, “When I get my CADENCE in the mail, the first thing I do is look inside the back cover for your article!”

As the years went by, Manager’s VPOINT was supplemented with a series on the field of electronic document management, which was newly burgeoning at that time. Called the EDM Chronicles, the series took the form of print articles published every other month. In 2003, CADENCE magazine was acquired by Cadalyst, and I was brought on board as an author and contributing editor — roles I continue in to this day.

Besides consulting and writing, I have a passion for speaking at live events.  My first CAD speaking engagement was at Autodesk University Atlanta in 1994, and I was hooked.  Since that day I've presented at 23 AUs (receiving consistently high ratings and two top speaker awards) and at more than 140 AUGI CAD Camp and Design Academy events starting in 2005.  I also speak regularly at a variety of private events such as CAD Midwest and Synergis University.  To date I've spoken to CAD managers in the United States, Canada, Dubai, United Kingdom, Holland, Belgium, and France — and have loved every minute of it except for the airport food.  These days I'm doing more online presentations as well —  such as Cadalyst's "Live with Robert Green" CAD management webinars, which we debuted last fall, and I have a successful Facebook group called CAD Managers Unite! All I ever wanted to do was share what I'd learned with other CAD managers; I never imagined it would take me around the world and let me meet so many cool people.

During my career I’ve seen CAD tools, computing ecosystems, and the publishing industry change dramatically. You could say, in contrast, that the process of managing people using CAD tools hasn’t changed — because it is still all about human motivation, support, standards, customization, and training — yet the profound changes in the flow of business information require a totally different skill set today than even five years ago.

As for me, I still love the challenge of managing CAD technology and find it fascinating; I especially enjoy the interaction with all those of you of met via e-mail, social media, and live events over the years. As the technology evolves further, I look forward to sharing my knowledge with you, in hopes that we can all evolve as well. Here goes.